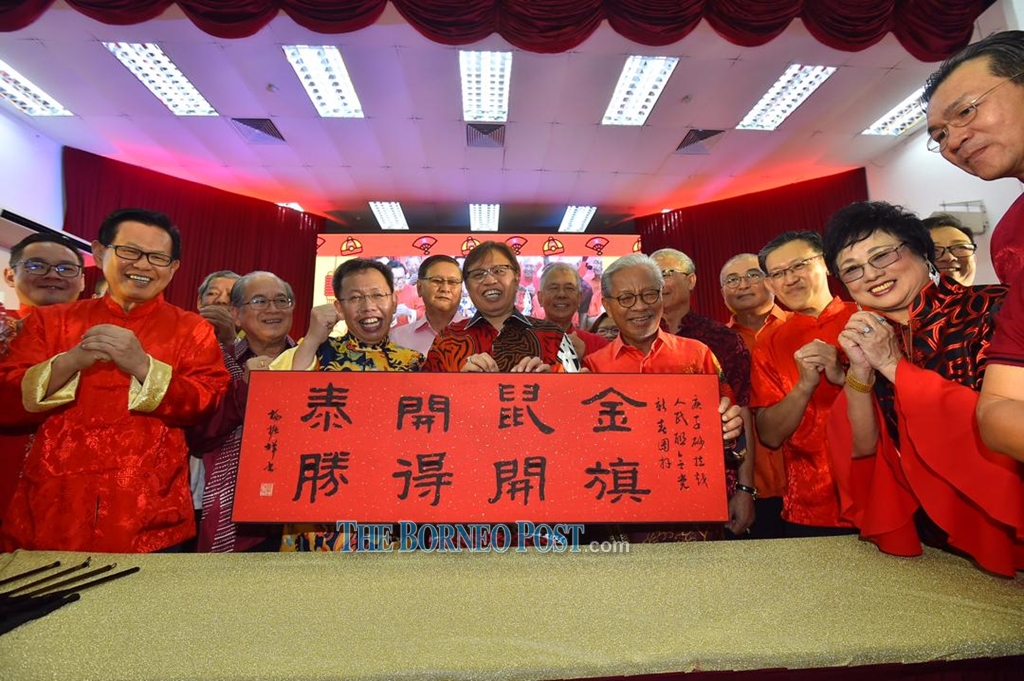 Dr Sim shows Abang Johari a piece of Chinese calligraphy at the open House, which roughly translates to ‘Golden Rats March for Peace, Paving the Way for Success and Victory’.

The organising chairperson for this year’s open house, Kho Teck Wan said this year they had seats properly arranged for all of their visitors, tables for VIPs, cocktail tables for visitors, besides chairs being arranged at all corners of the building.

“This year we did things differently, preparing all the chairs, tables and cocktail tables for our guests and well wishers.

“Hopefully with this kind of setting, people can mingle around,” she said.

The highlight of the event was the visit by His Excellency Yang Dipertua Negeri, Tun Pehin Sri Abdul Taib Mahmud and his wife, Toh Puan Ragad Kurdi Taib who arrived at 11.30am and Chief Minister Datuk Patinggi Abang Johari Tun Openg who arrived at 10am

Both were welcomed by SUPP president and Minister of Local Government and Housing Datuk Dr Sim Hui Kian.

Kho added that the SUPP Open House has been organised since 1959, and those days she said, people will bring food to the headquarters.

“But now we bring food to the people. Every year to some, they look forward to coming back for Chinese New Year and this is home to them,” she said.

Meanwhile, she said SUPP does not only organise open house on Chinese New Year but also for Gawai Dayak.

“Three years ago we started an open house for Gawai Dayak too. Our members from the Dayak community comprises of 33 per cent,” she said.

In addition, the event had entertainment, such as lion dance performances and a Chinese calligraphy-writing session.