Saturday, August 13
You are at:Home»Features»Mother prays for miracle for paralysed son 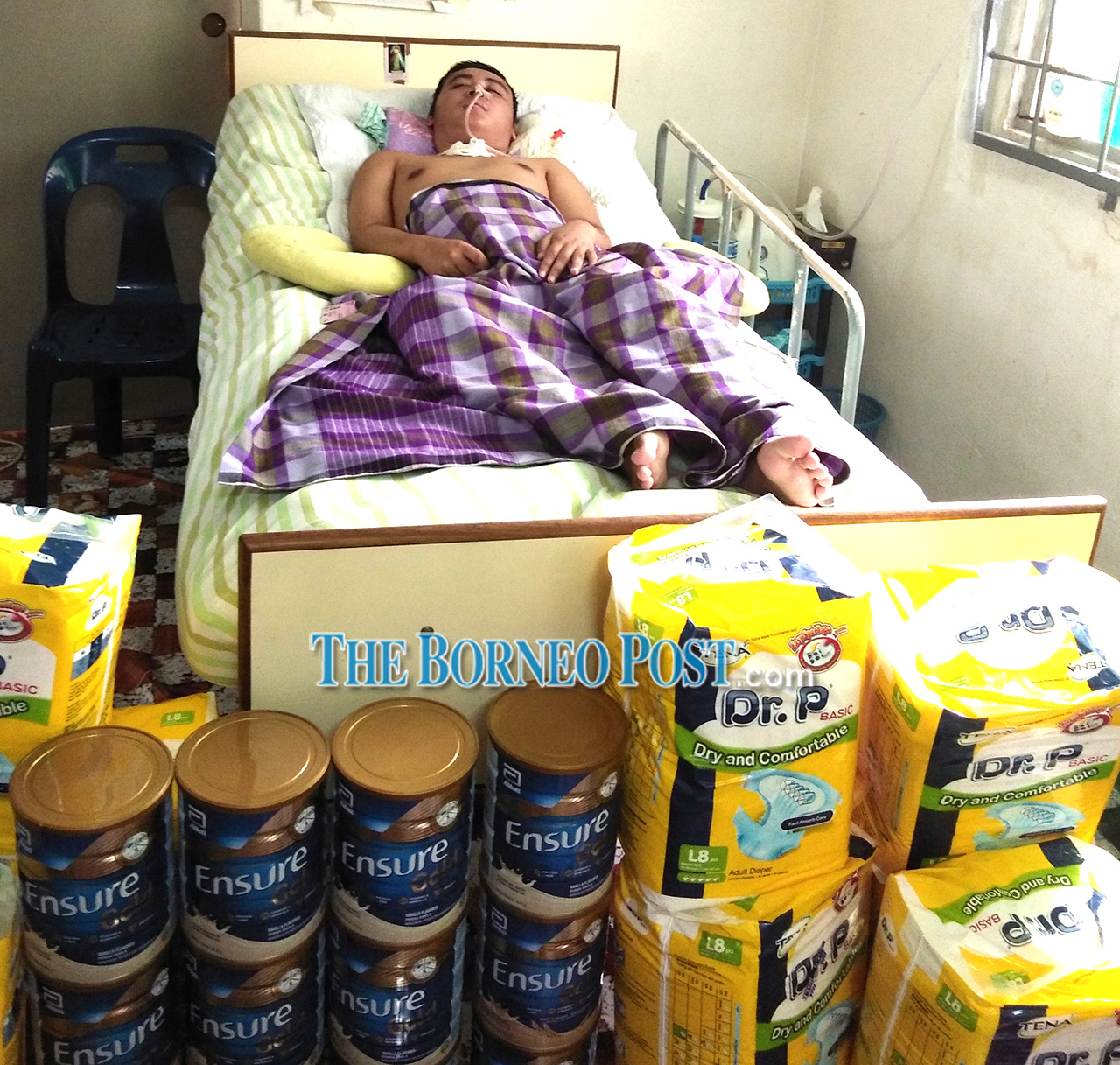 Ronaido has been bed-ridden since the accident in 2016.

The Biennial National Games or Sukan Malaysia brings back painful memories of a grevious happening she’d rather forget but couldn’t despite a lapse of four years.

Her youngest child, Ronaido (Lim), then 16, was knocked down by a van around midnight while crossing the road after taking part in a SUKMA event in 2016.

Runin, a 49-year-old part-time cleaner, said Ronaido, now 20, became paralysed from brain damage as a result of the accident which occcurred at Jalan Bako shortly after he alighted from the school bus bringing teachers and students back from the Games.

His family, who stayed at nearby Kampung Siol Batu, was immediately alerted by his friends and they rushed to the scene. 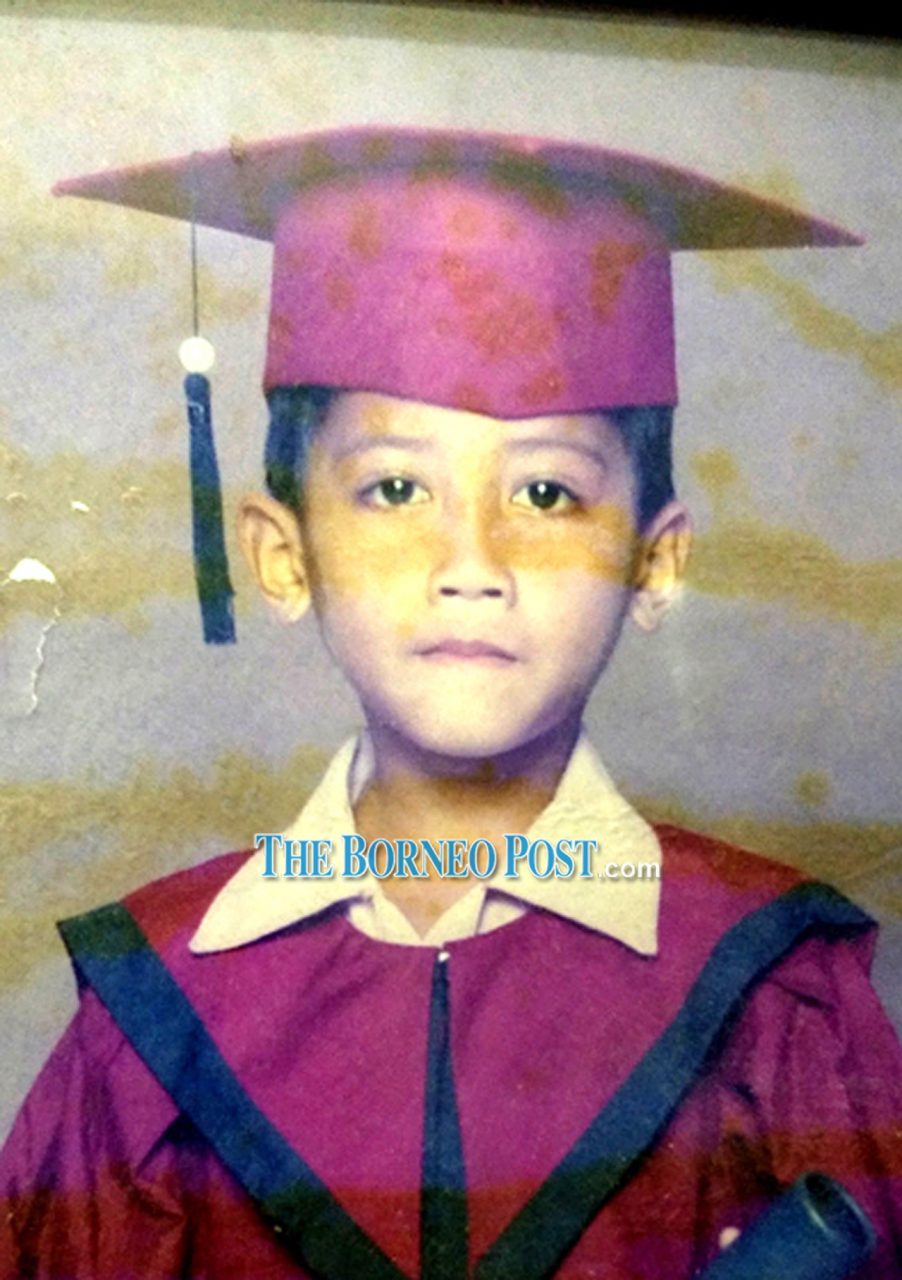 The only photo of Ronaido’s taken when he was a little boy.

An ambulance, accompanying a minister’s motorcade, was diverted to the scene to bring the critically-injured teenager to the Sarawak General Hospital, accompanied by his family.

Runin said it hurts “to the core” to see the opportunity for a normal life tragically taken away from her “young energetic boy” who now has to remain in bed, only able to blink his eyes, and be fed through a tube.

She never found out who the driver was and hoped one day the latter would be “benevolent enough” to own up. She believed this, at least, would lessen the family’s anguish.

Runin said Ronaido was a “very good and independent boy.”

“As a student, he was diligent. He loved sports and had represented his school in track events and won many medals. He was cheerful and well-liked by both siblings and friends and he liked them back.

“He never gave us or anyone else any problems — not once had he raised his voice at his parents. He once said mum, when I start working, I’ll be able to lighten your burden, so you don’t have to work so hard any more. I want to give you a good life, mum.

“Those words always melt my heart and make me cry,” she added. 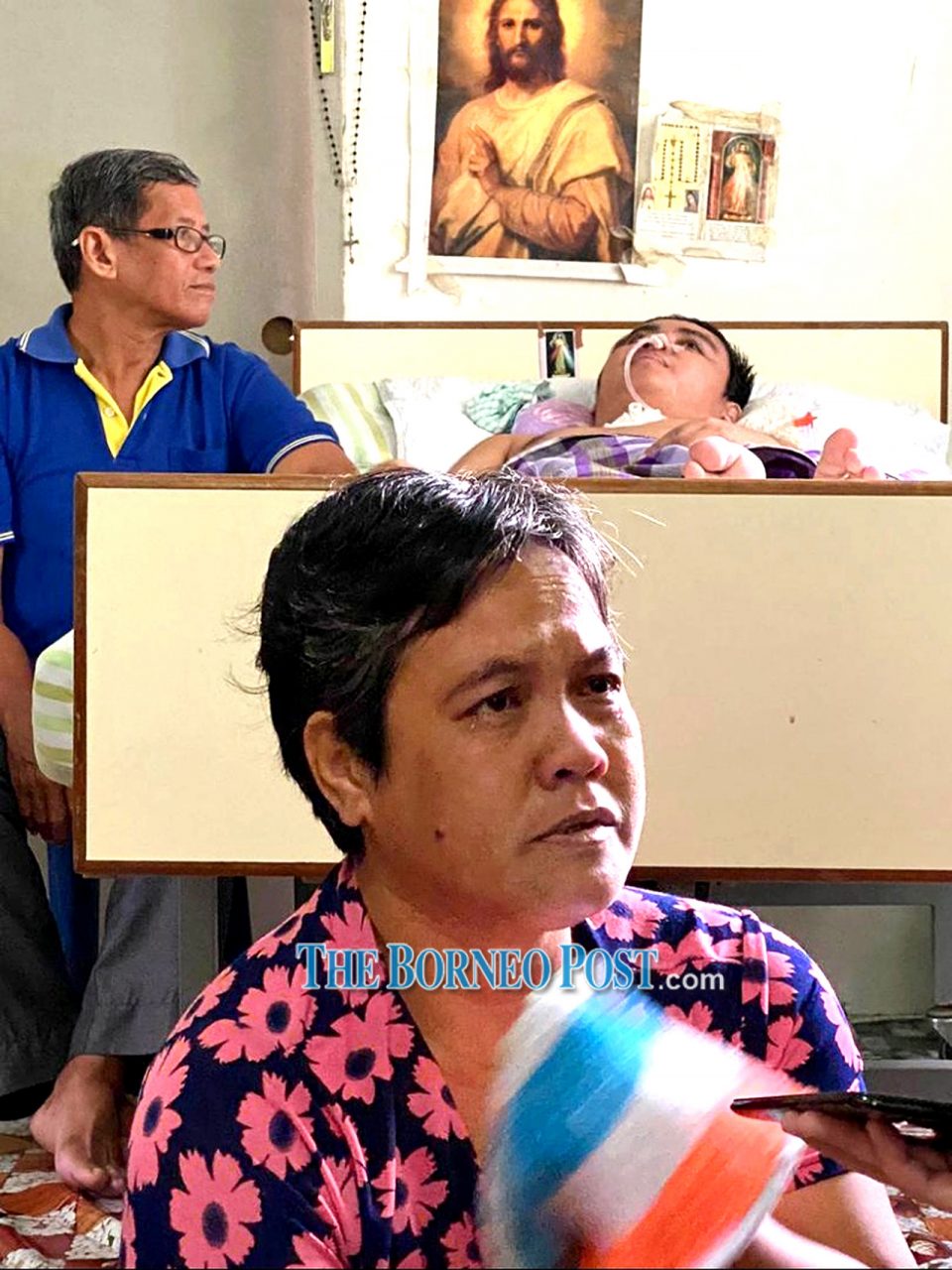 Runin says Ronaido was left paralysed after being knocked down by a van in 2016.

A dream in vain

According to Runin, Ronaido’s ambition is to be a chef as he loves cooking, especially exotic cuisine.

“Now, it appears his dream will never come true. He didn’t even have a chance to sit for his SPM. All I can do now is pray and hope for a miracle that my son will one day get up, walk again and fulfil his ambition.”

She said she continued to be dazed by how a person’s life could change forever in a fraction of a second.

“Ronaido was a healthy young person — never ever got sick enough to be admitted to hospital. The family never expected something like this (accident) to happen. Yet it did. He is now in hospital and when he leaves, he won’t be the same person anymore.

“I must confess I’m selfish to think I see myself actually suffering more than he does. That’s why I feel if I could exchange my life for his, I would.” 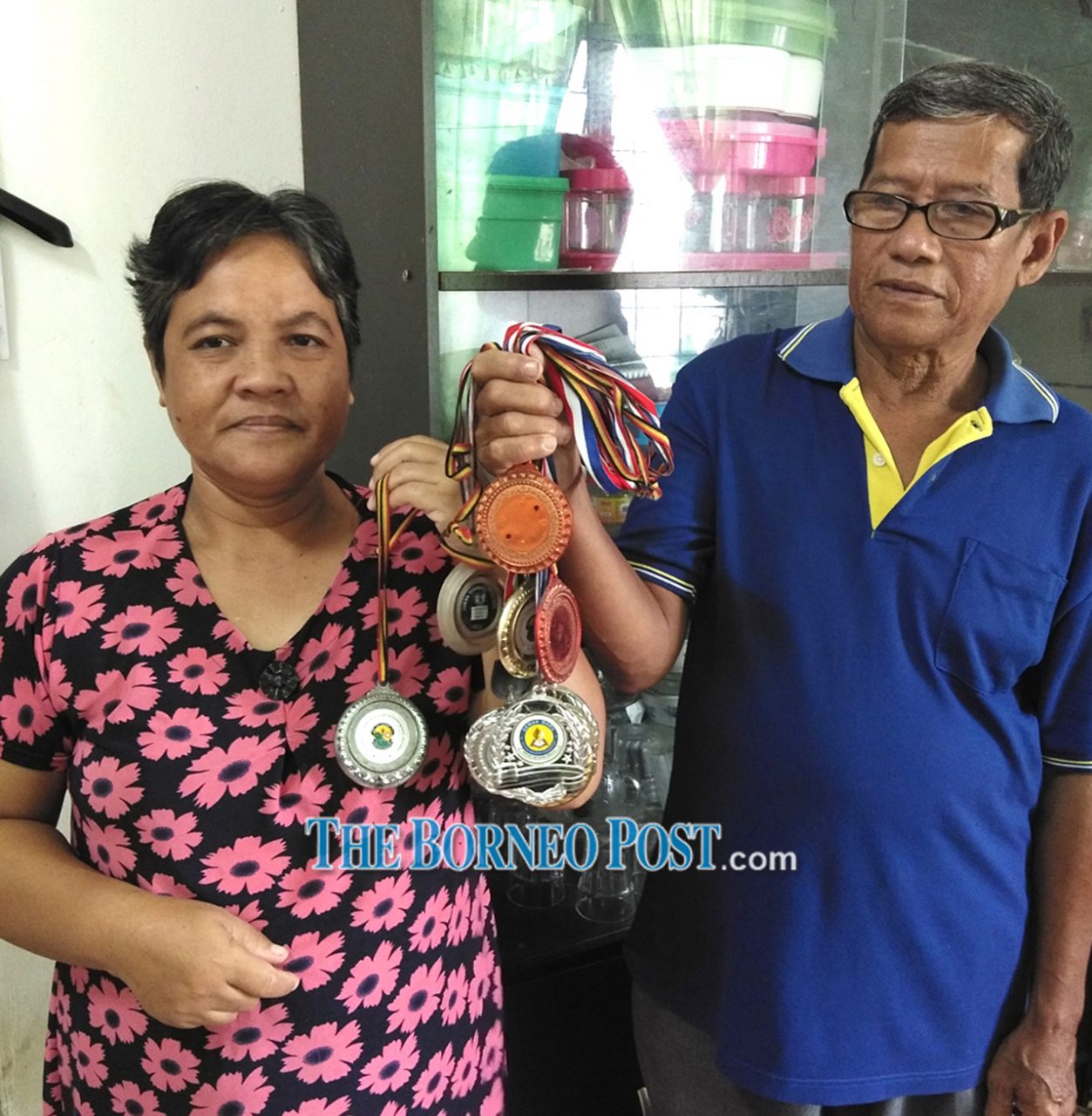 Runin is the sole breadwinner, earning RM5 an hour as a part-time cleaner. Her husband has partial paralysis from stroke. He can only help keep an eye on Ronaido and do simple chores when she is out.

In essence, Runin has to support both her comatose son and her husband. Although she has other children, they are struggling with their own lives and cannot help much.

Ronaido is now unable to speak or show any emotions but Runin believes he is aware of his surroundings. She suspects he has the capability to miss his friends or teachers after they gradually stopped coming to see him from 2017.

Runin never misses praying for a miracle on Ronaido’s birthday (Aug 8) since the accident.

“I dread to think about his future if he never wakes up — and I’m getting old.”

She said she only had a photo of him as a little boy, noting that somehow he wasn’t fond of having his photos taken — not even with the medals he won.

Ronaido survives on a special kind of tube-fed milk which is very expensive. The family does receive help randomly, including from the Welfare Department.

“I’m very thankful for all the help,” she added. 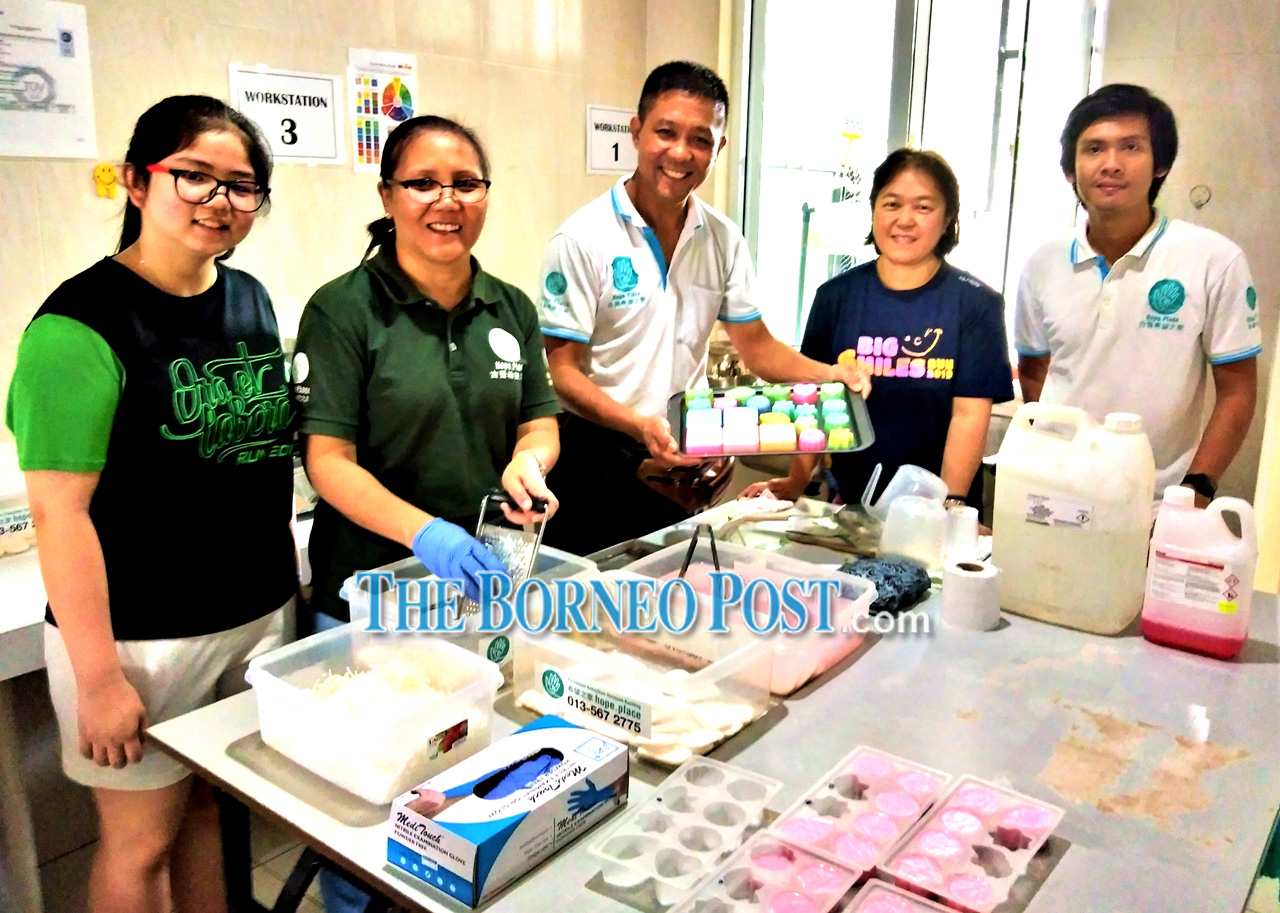 Kelvin, his staff and volunteers showing some of the products processed from used soaps.

Ronaido’s family is one of the 194 now under the care of Hope Place Kuching.

The founder Kelvin Wan said he and some of his staff helpers had developed an emotional bond with the people they were helping.

“Last year, 10 OKUs under our care passed away. Whenever someone we have been helping dies, we feel sad because we already know them and they’re like family.”

Wan said Hope Place had recently launched another channel to help the needy with a new charity centre at TT3 Plaza in Tabuan Tranquility here. This branch named Hope Place Charity Centre (HPCC) is leased from Ibraco for free as part of the developer’s community service.

HPCC has been set up to collect and sell used things, donated by the public. The money raised is used to buy essential items for the poor under its care or finance the Centre’s administration or activities.

Wan welcomes public donations — new or used — as long as they are still in good condition. Among the things commonly donated and sold are second-hand clothes, bags, blankets, household items and toys.

He emphasised donated items must be in good condition, clarifying the Charity Centre is not a place to collect junks for recycling as some apparently thought.

“That’s why we’ve had so many unwanted things dumped here — like spoilt furniture or TVs, among others. Please take note this is not a recycling centre nor a dumping ground for unwanted items.”

Hilton Hotel Kuching has started a soap recycling project — ‘Solution for Life’ — in collaboration with Ecolab and Hope Place. It’s an HPCC initiative.

Ecolab contributes technical expertise on processing soap waste while Hilton Kuching supplies the used soaps to Ecolab every month. The soaps, processed by trained staff, are sold as cheap as from 20 sen apiece.