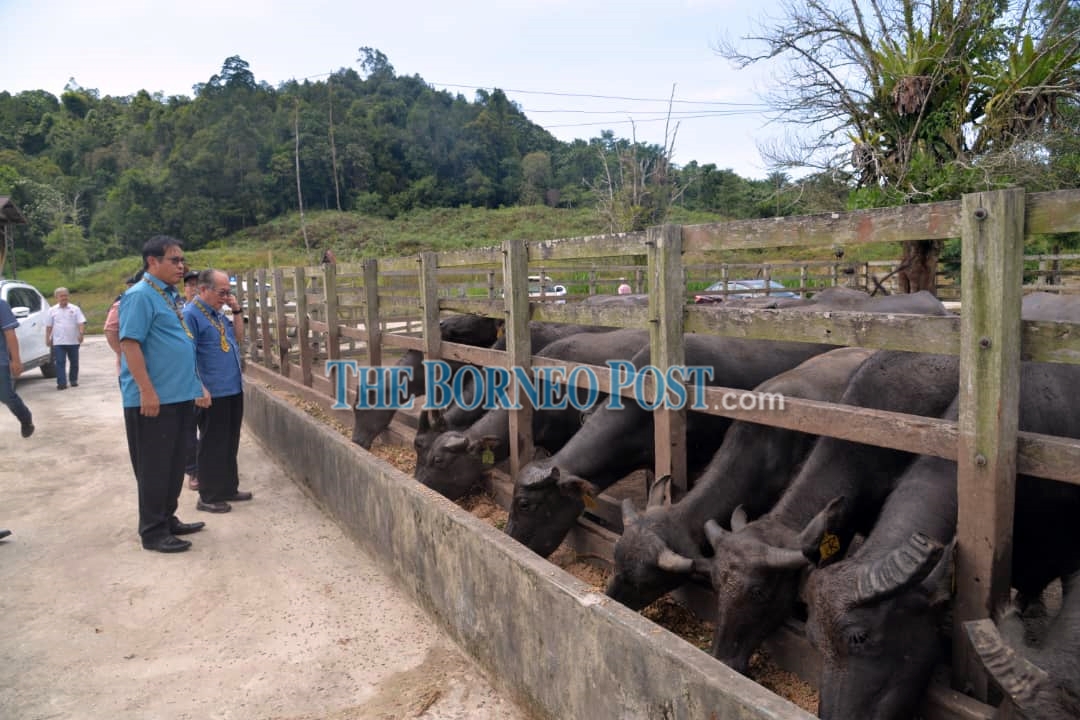 Uggah (second left) and Dr Rahman (first left) take a closer look at the Australian buffaloes during the feeding time.

Uggah said these include bringing in breeding stocks from countries like Australia and India.

In a statement issued after he recently visited the Maragang Buffalo Breeding Station in Lawas, he said the station currently has 477 buffaloes, of which 252 were imported last year from Australia, while the balance are local breed.

With a developed area of 194 hectares out of the total of 488 hectares, this station – managed by Department of Veterinary Services (DVS) Sarawak – is to produce quality swamp buffaloes for breeding purposes for farmers and also serves as training centre.

“Australian breed could grow up to huge size of 800 kilogrammes (kg), compared to local breed at between 300kg and 400kg. We aim to improve our breeding technology including the application of artificial insemination.

“Of course one of the most important factors is to ensure we have enough feed for them,” he said.

Uggah, who is also the Minister of Agriculture Modernisation, Native Land and Regional Development, said the ministry is also focussing on feed development.

He added that the processed oil palm fronds has potential, as Sabah was using it in its industry.

“We have around two million hectares under oil palm and daily, there is a lot of fronds pruning work. We may be accessible to 100,000 hectares, so, one can imagine the amount of fronds generated.

“Furthermore, if we can develop other feed sources from maize, pineapple and other biomass, we can definitely lower the cost for farmers.

“These would help the farmers greatly as well as motivate more youth into the industry, he continued.

Uggah said there was a need to develop intensive farm models, where a five acre site could be used to breed 30 heads.

Uggah said the government want to revive the industry to help contribute to Sarawak’s aim to be a net exporter of food and food products by 2030.

“There is a lot of demand for buffalo meat in the region,” he said.

Previous ArticleMan arrested after over RM3k worth of drugs found in his possession
Next Article Married couple bound, blindfolded by armed robbers during robbery in Kuching