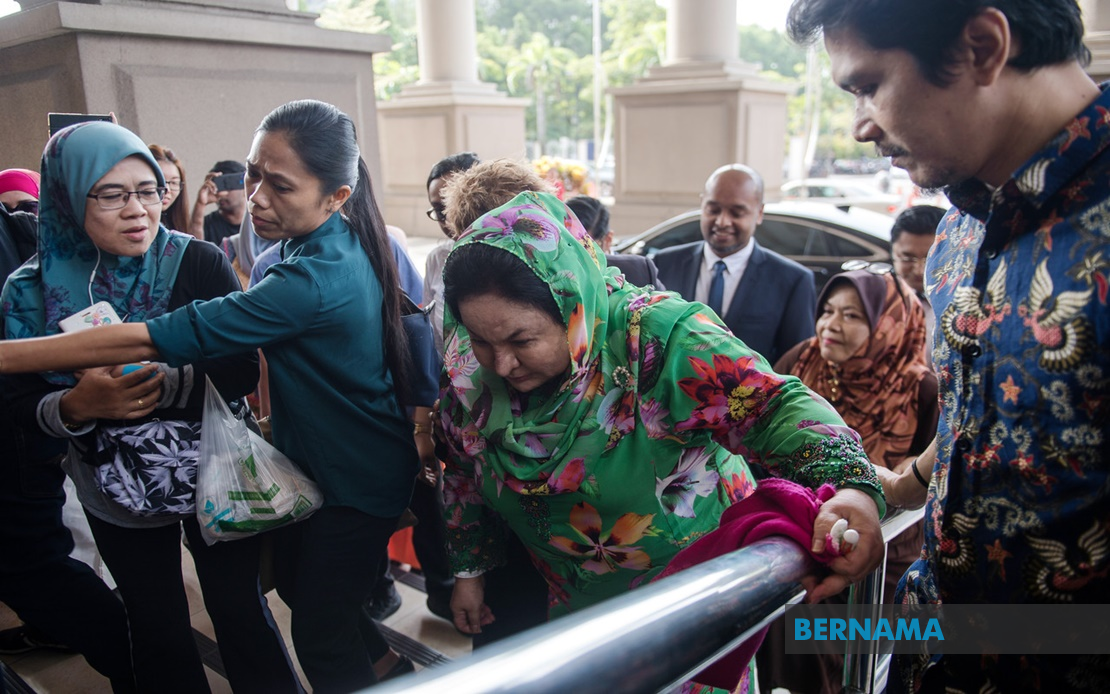 KUALA LUMPUR: The High Court was told today that the bank that was used to withdraw money to pay an alleged bribe to Datin Seri Rosmah Mansor was short on bills on both occasions.

The former head cashier of Maybank’s Medan Tuanku, Kuala Lumpur branch, Azimah Aziz, told the High Court she requested RM5 million in 2016 and another RM1 million in 2017 for Saidi Abang Samsudin who made the withdrawals in cash.

Saidi, 60, allegedly took the cash to pay Rosmah so she would assist Jepak Holdings Sdn Bhd to obtain the Hybrid Photovoltaic Solar System Integrated project and the maintenance and operation of Genset/Diesel for 369 rural schools in Sarawak worth RM1.25 billion via direct negotiations with the Education Ministry.

Saidi had made a request to withdraw RM5 million on December 19, 2016 with the bank, but it only had RM1.2 million in cash on hand.

Azimah said she then made a request with Maybank’s Cash Management department at its headquarters through an E-Cash system on the same day for RM5 million cash in hundred-ringgits denominations.

The money was delivered on December 20, 2016 by Armour Security to Maybank Medan Tuanku and sent straight to its cash room.

“Once Armour Security delivered the money and we counted it, we sent it to the vault at 11.40am as we did not know what time Saidi was going to arrive.

“Around 2pm, I was informed by one of the bank employees that Saidi had arrived so me and Harryade Abe, the assistant bank manager, took the RM5 million in cash from the vault to the cash room,” Azimah told the High Court today as she took the stand as the third prosecution witness.

“I then met Saidi who was with another Malay gentleman in the cash room. Once again, I counted the money, this time in front of them, and when done, I gave the money to Saidi.

“Saidi then proceeded to count the money himself before putting it in a bag he brought with him and left. I did not follow them,” she said.

Then on September 6, 2017 at 3pm, Azimah received a WhatsApp text message that Saidi wanted to withdraw RM1.5 million in cash the following day. Saidi again requested for the bills to be in RM100 notes.

As the bank was short of funds, Azimah made a request with Maybank headquarters to send RM1 million which arrived the following day.

The bank teller working on the day, Nurul Fathiah Baharun, gave Azimah a cheque along with Saidi’s identity card and proceeded to make the order for RM1.5 million through Maybank’s Regional Branch System (RBS).

Upon receiving the order chit, Azimah used that as proof to process the RM1.5 million to be given to Saidi.

“After that, I personally called Saidi to enter the cash room on level one. I knew who he was, since I had dealt with him before.

“As we entered the room, another Malay-looking man followed us in, bringing along with him two black duffle bags. We counted the money and tied them up in 15 bundles of RM100,000 each,” said Azimah.

“I asked Saidi what he wanted to do with the money as is standard practise for banks, to which he said it’s for business purposes.

“Saidi and the Malay-looking man then left the room and I wrote the word “paid” on top of the cheque.”

During cross-examination, Azimah was asked if she felt there was something wrong with the requests by Saidi and if she felt the need to make a report to the authorities, to which she said they usually report any suspicious matters to the Malaysian Anti-Corruption Commission (MACC).

“We do tell the MACC and my bosses, but if you need further explanation, it would be best to ask my boss Harryade.”

Rosmah was charged on November 15, 2018 with having asked for an RM187.5 million bribe or 15 per cent of the contract’s value from the company Jepak Holdings Sdn Bhd’s managing director Saidi Abang Samsudin, and receiving an RM1.5 million bribe from Saidi.

She was charged on April 10, 2019 with receiving a RM5 million bribe in cash from Saidi via her former aide Datuk Rizal Mansor.

On Monday, Rosmah had failed to appear in court, with her lawyers producing a medical certificate to explain her absence, saying that the sick leave was for until February 8.

Lead prosecutor Datuk Seri Gopal Sri Ram had, however, objected to the medical certificate being used to justify her absence from the courtroom, arguing that he too was suffering from some of the medical conditions that Rosmah was said to have.

The trial continues tomorrow at 10am. – Malay Mail