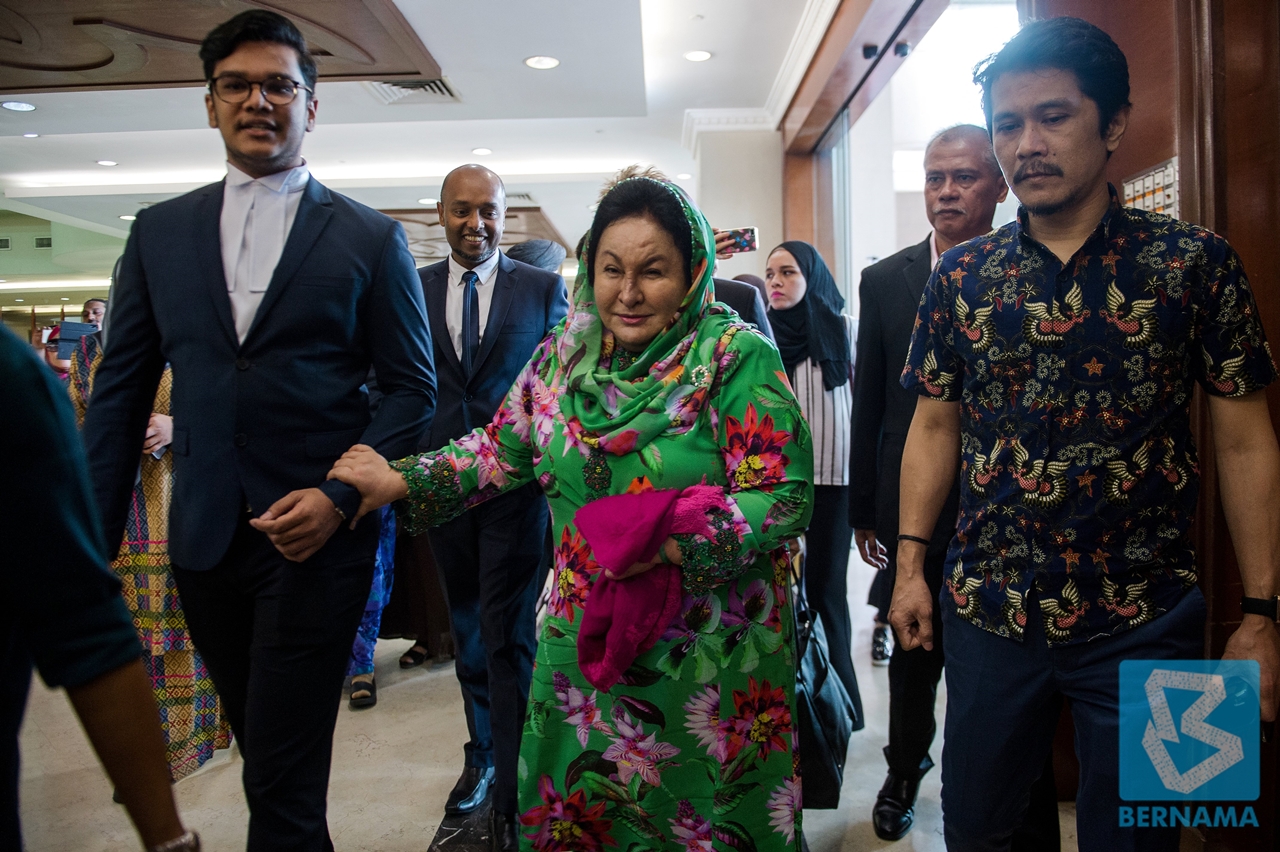 KUALA LUMPUR: The prosecution will prove that Datin Seri Rosmah Mansor had used her influence to receive a bribe of RM6.5 million in cash from a company as an inducement to help the company obtain a solar hybrid project, the High Court was told today.

Lead prosecutor Datuk Seri Gopal Sri Ram said the RM5 million cash had been delivered to the accused’s official residence in Putrajaya and was received by her while another RM1.5 million in cash had been sent to her house at Langgak Duta, here.

He said the payment was contingent on her using her influence to obtain the solar hybrid contract for Jepak Holdings Sdn Bhd.

“Evidence will be led to show the active role played by the accused to obtain the project for Jepak. In return she solicited and obtained a bribe,” he said in his opening statement on the first day of Rosmah’s corruption trial in a packed courtroom before Justice Mohamed Zaini Mazlan.

Explaining the case, Sri Ram said Jepak Holdings is a private limited company where at all times relevant to the charges, Saidi Abang Samsudin was the managing director and majority shareholder of the company.

He said Saidi wanted to obtain work from the Federal Government for his company, specifically, an award of a contract to carry out a solar hybrid project purportedly to benefit some 369 rural schools spread across the interior of Sarawak.

“Saidi sought the contract from the Ministry of Education with his partner Rayyan Radzwill Abdullah. They approached Mahdzir Khalid, the then Minister of Education. A meeting took place between them.

“It was unfruitful for Saidi. He got nowhere. Saidi and Rayyan then approached Aazmey Abu Talib whom they perceived as being close to the accused’s husband in order to obtain support for his request for the contract,” he said.

The senior DPP contended that with Aazmey’s help, Saidi managed to obtain a minute from the accused’s husband on his letter of application supporting it, but that did not help speed up matters with the Ministry of Education.

He said Saidi and Rayyan were bent upon getting the solar hybrid project for Jepak.

“Avenues of success having produced no positive result, they turned to the accused whom they managed to contact through Rizal Mansor.

“Rizal Mansor arranged a meeting between Saidi, Rayyan and the accused. The meeting took place between January and April 2016. It was held in the privacy of the accused’s private residence at Jalan Langgak Duta, here,” he said.

He further said that Saidi wanted the accused’s assurance that she would help Jepak and in return, Saidi was prepared to offer a large sum of money to the accused.

Sri Ram said according to Saidi, at the 2016 meeting, the accused was shown Jepak’s application bearing a minute from the accused’s husband.

“Saidi then made an offer of a political donation to the accused’s husband as a gesture of gratitude for supporting the application.

It is of importance to note that the accused did not hold any position of responsibility in any political party at that time and the accused knew that the so-called “political donation” was meant as a bribe for her, said Sri Ram.

The DPP said after the meeting, the accused incrementally increased the sum of political donation to RM187.5 million which works out to 15% of the value of RM1.25 billion and she used Rizal to make her demands and to negotiate the bribe that was to be paid to her.

“Initially she wanted 17% of the value of the project which works out to a sum in excess of RM 200 million. On Rizal’s advice, she agreed to accept 15%. A sham agreement was drawn up by one Lawrence Tee.

“The purpose of the agreement was to disguise the payment and to conceal the name of the true recipient of the money. That agreement has gone missing. Nobody is certain who has it. Lawrence will testify as to its contents,” he said.

Sri Ram explained that on Dec 20, 2016, after the agreement was executed, Saidi gave the accused RM5 million in cash as promised and the payment was made after the Letter of Award was issued to Jepak by the Ministry of Education.

“The money was delivered to the accused’s official residence in Putrajaya and received by her after confirming with Rizal that the sum was, in fact, RM5 million.

Sri Ram said the solar contract was executed on June 20, 2017, and the Ministry of Education then released a series of payments to Jepak and later, Saidi delivered RM1.5 million in cash to the accused at her Langgak Duta home in September 2017.

He further said direct and circumstantial evidence would be led to prove that the accused was actuated by a corrupt intention at all material times.

“But at the end of the day, their evidence will be found to be both credible and corroborated in material particulars. The prosecution will be able to prove not only that a crime was committed but that it was the accused who committed it.

“Finally, the court will hear evidence of witnesses who may display a bias towards the accused. On the facts of this case, this is inevitable. The prosecution will address the Court on the way in which the evidence of these witnesses is to be treated when we come to make our submissions,” he said.