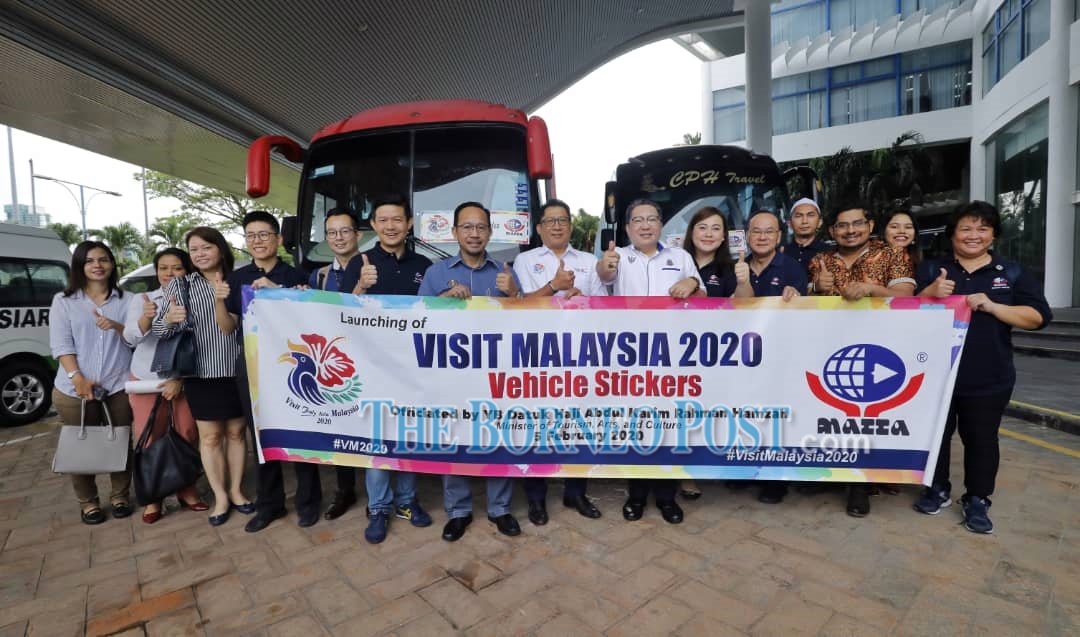 Tsen (sixth right), Wee (seventh right) and representatives of tour agencies giving their thumbs up at the launching of VM2020 vehicle sticker at MBKS Foyer this morning. – Photo by Chimon Upon.

KUCHING: Malaysian Association of Tour and Travel Agents (MATTA) Sarawak Chapter supports the state government’s move to impose a ban on all China tourists from entering the state to prevent the spread of the Wuhan coronavirus in the state, said its chairman Lina Tsen Pei Tsin.

“Yes, we support the state government in banning Chinese tourists from coming into the state for safety reasons. It is not just us being affected, but it is a global thing.

“We hope that this virus will be contained so that people are safe to go anywhere they want,” she said when met by reporters at the launch of Visit Malaysia 2020 (VM2020) stickers on tour buses and coaches at the foyer of Kuching City South Council (MBKS) today.

Tsen said the effect of the novel coronavirus on Sarawak’s travel industry is marginal because most of the tourists are from Canada, Europe and the US.

“Tourists coming to Sarawak are mostly Canadians, Europeans and Americans, including those coming in using cruise liners. They are inclined to Borneo island as a whole and they are into culture and arts.

Tsen pointed out that the reason why travel industry players here do not consider China a big pat of their market segment was due to an insufficient number of direct flights from China to Kuching.

“Actually, for inbound flights, we do not have direct flights to and from China. We used to have flights from Shenzhen to Kuching but it has stopped due to poor passenger load,” she said.