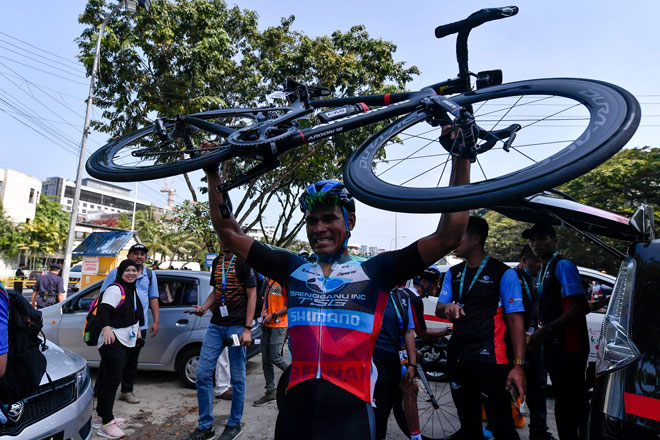 KOTA KINABALU: The absence of his elder brother in the pack had little effect on Terengganu Inc. TSG Cycling Team (TSG) sprinter Mohd Harrif Saleh’s performance as he raced to a podium finish at the Kota Kinabalu International Criterium held at Padang Merdeka here yesterday.

The Kuala Terengganu-born rider emerged as the runner-up of the curtain raiser to the Le Tour de Langkawi (LTdL) 2020 stage cycling race.

The race chief judge declared that the top 10 finishers clocked the same finishing time of 1 hour 42 minutes and 01 seconds after crossing the line in a bunch.

Mohd Harrif, 31, told reporters that he did not expect a podium finish yesterday as the pace was very fast due to the flat route.

“This victory has boosted my confidence to face the LTdL.

“The peloton had managed to catch the leading group within the last five kilometres, and today’s strategy has been successful. Alhamdulillah, I managed to secure the finish,” said Mohd Harrif, also fondly known as Mamat among his teammates.

Asked whether he was confident of securing another podium finish in the race’s first stage in Kuching, today, Mohd Harrif said he felt optimistic.

“l have to see study coach (Jeremy Hunt) plans, and Insya-Allah (God willing), hopefully, luck will be on my side again in tomorrow’s race,” said Mohd Harrif, who sprung a surprise victory during the 2019 LTdL stage from Senawang to Melaka.

The TSG management did not list Mohd Harrid’s brother Mohd Zamri this time around, as the 35-year-old is recovering from his heart surgery at the National Heart Institute (IJN) in September last year.

The LTdL 2020 first stage tomorrow will cover a distance of 96.2 km around the city of Kuching, featuring three sprint zones at the Sejingkat, Kuching Isthmus and during the third passage of the Kuching loop at Padang Merdeka. — Bernama