Wednesday, August 4
You are at:Home»Lite Stories»Catch of the day attracts curious onlookers in fisherman’s market 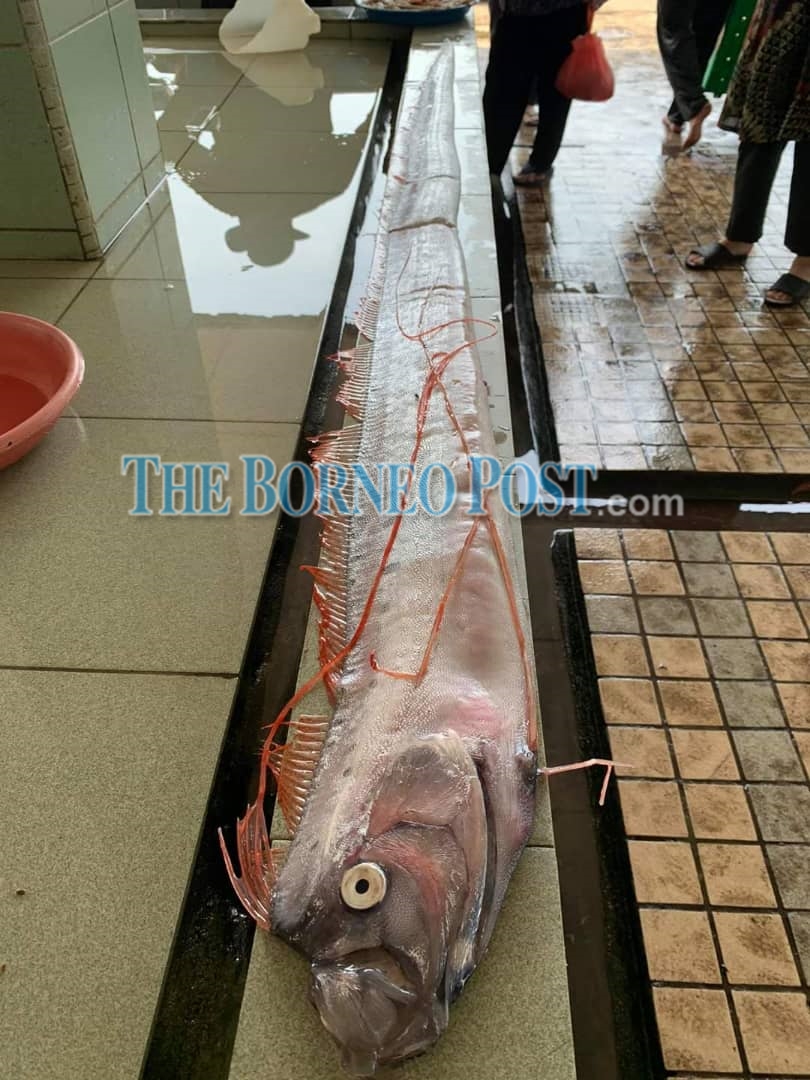 The unusual catch of an over 12-feet long oarfish landed by Kampung Batu Satu’s fishermen.

MIRI: The Kampung Batu Satu fisherman market was a lively, raucous affair after the village’s fishermen landed a giant oarfish.

Over 12 feet long, the oarfish or Regalecus Glesne as it is scientifically known, attracted many passerbys who came to get their fresh seafood supply from the market, which is located at Kuala Baram’s roadside.

The deep-sea species was then placed for selling, after a member of the public who came to the market around 10am took a picture of the unusual catch and shared the picture witha reporter from The Borneo Post’s sister paper See Hua Daily News.

Some say that the flesh of the fish is gelatinous while its taste is similar to Lumek fish (scientific name Bombay Duck).

The Regalecus glesne is a species of oarfish of the Regalecidae family and is an oceanodromous species with a worldwide distribution, excluding polar regions, and other common names include Pacific oarfish, king of herrings, ribbonfish or streamer fish.

Its physical characteristics of being ribbon-like, laterally narrow with a dorsal fin along its entire length, stubby pectoral fins and long oar-shaped pelvic fins, from which its common name is derived, and undulating mode of swimming have led to speculation that it may be the source of many ‘sea serpent’ sightings.

Additionally, Japanese folklore connect the species as a messenger from the sea god’s palace and according to traditioinal belief, if many oarfish wash up on the shore signals a coming earthquake.

With ribbon-like shape, narrow laterally, with a dorsal fin along its entire length, stubby pectoral fins, and long, oar-shaped pelvic fins, from which its common name is derived. Its coloration is silvery with dark markings, and its fins are red.

Its physical characteristics and its undulating mode of swimming have led to speculation that it might be the source of many “sea serpent” sightings.

In addition to that, there is a folklore among the Japanese who connected the species as the messenger from the sea god’s palace.

According to their traditional belief, oarfish may signal a coming earthquake if many of such species wash up to the shore.

Previous ArticleCoronavirus: Malaysia confirms 16th case
Next Article What will it take to wake us all up?