Friday, December 3
You are at:Home»World»Dozens evacuated from thai mall after gunman kills least 20 in mass shooting 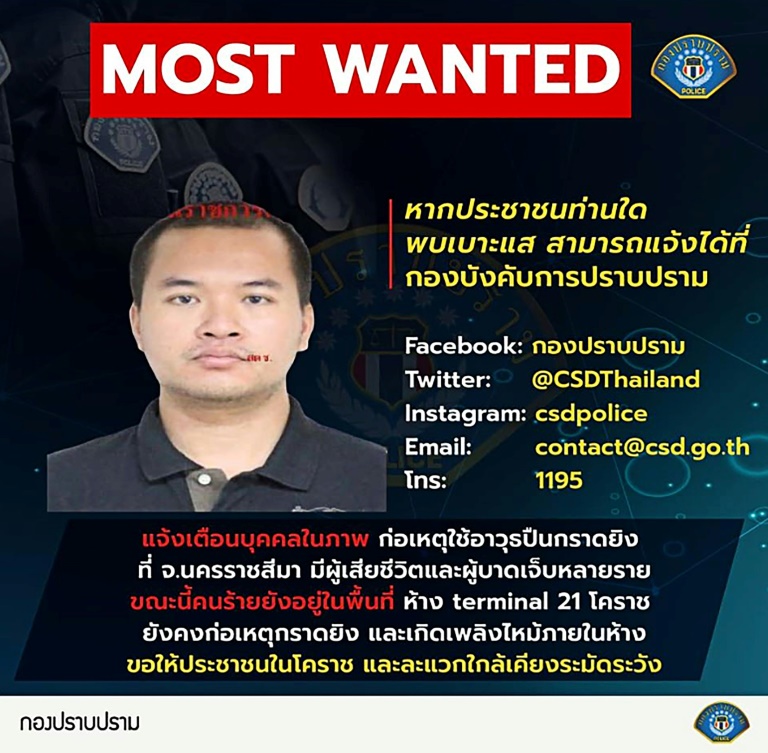 Thai Royal Police put out a wanted poster on their Facebook page for Army Sergeant Major Jakrapanth Thomma, wanted in connection to a deadly attack in the northeastern city of Nakhon Ratchasima. – AFP photo

Dozens of terrified shoppers were evacuated from a Thai mall early Sunday as armed police said they had “taken control” of the ground floor of the complex from a gunman who killed at least 20 people.

But authorities did not give any firm details on the whereabouts of the attacker – a junior army officer named Sergeant-Major Jakrapanth Thomma.

There were fears the shooter could try to hide amongst the panicked crowds.

Police from the Crime Supression Division urged fleeing shoppers to “raise their hands” and identify themselves on the ground floor “and authorities will evacuate you”.

Earlier Jakrapanth relayed his shooting spree through Facebook posts which charted the attack from an army barracks to the mall where an unknown number of shoppers remained trapped.

Hospitals across the country braced for a grim night ahead.

“There are about 20 dead,” Kongcheep Tantravanich, defence ministry spokesman said.

The Thai Health Minister told reporters around 10 people were already in hospital in a “serious condition.”

The bloodshed began Saturday afternoon when Jakrapanth shot three people — among them at least one soldier — at an nearby army barracks.

“He stole an army vehicle and drove into the town centre,” police Lieutenant-Colonel Mongkol Kuptasiri.

There the gunman used weapons stolen from the army arsenal to bring carnage to a town centre, walking into the Terminal 21 mall.

He “used a machine gun and shot innocent victims resulting in many injured and dead,” police spokesman Krissana Pattanacharoen said.

But he throughout the day he posted images of himself and wrote several posts on his Facebook page as the attack unfolded including “should I surrender?” and “no one can escape death”.

In one Facebook video — since deleted — the assailant, wearing an army helmet, filmed from an open jeep saying, “I’m tired… I can’t pull my finger anymore” and making a trigger symbol with his hand.

There were also photos of a man in a ski mask holding up a pistol.

A Facebook spokesperson said “we have removed the gunman’s accounts from our services and will work around the clock to remove any violating content related to this attack as soon as we become aware of it”.

A witness who was inside the mall before the attack told AFP the shopping centre was thronging with shoppers on a long weekend.

“There were loads of people at the mall today,” a 32-year-old from the city said, requesting anonymity.

“I was pretty shocked when I found out because I just left the mall not long before.”

Street lights below the shopping centre were switched off as army and police units sealed off the Terminal 21 mall.

The city – better known as Korat – is home to one of Thailand’s largest barracks in a country where the military is enmeshed in politics and society.

Thailand has one of the highest rates of gun ownership in the world.

In another high-profile case, a two-year-old boy was among three people killed in Thailand when a masked gunman robbed a jewellery shop last month.

Late last year two lawyers were shot dead by a clerk at a court in the east of the country during a hearing over a land dispute. – AFP