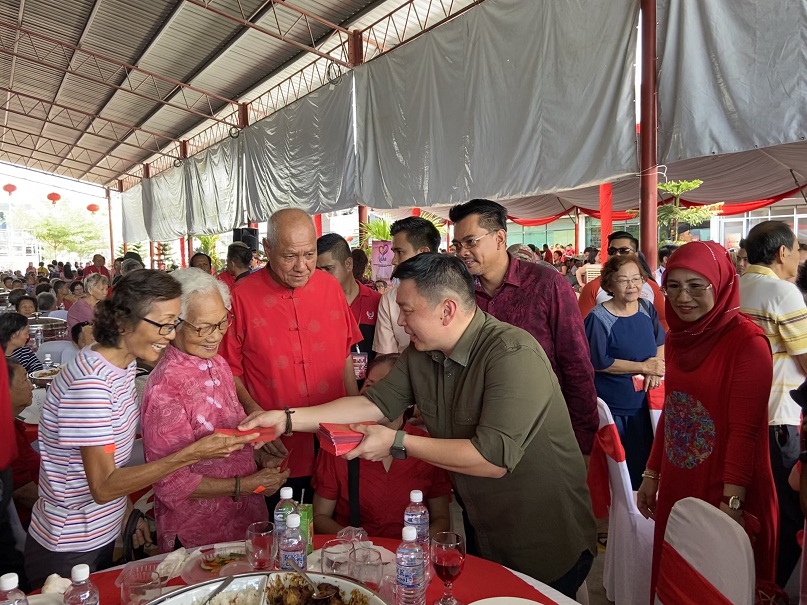 Darell presenting an ang pow to one of the senior citizens at the Sepanggar Chinese New Year Open House yesterday. Also seen is Azis (second right).

SEPANGGAR: The Federal Government will conduct discussions with the relevant stakeholders on how to come up with an economic stimulus package that can mitigate the impact of the 2019 novel coronavirus (2019-nCoV) outbreak.
International Trade and Industry Minister Datuk Darell

Leiking said that he had brought up the matter in the Federal Cabinet together with Finance Minister Lim Guang Eng.

“We will discuss with all the stakeholders on what we can do to stimulate the economy with a package – at least a stimulus package. But it has yet to be refined simply because we need to get the feedback from every industry that was affected.

“I think that the country needs to be wary. While we are concerned about the novel coronavirus, we should also take heed of what are the effects it would bring to our industry,” Darell told this to reporters when met during the P.171 Sepanggar Chinese New Year Open House at BSA Kolombong here yesterday.

“We don’t want our industry to suffer – where there could be a setback in the economy. We hope that the industry players and the employers will keep their company strong and that they don’t lay off workers,” he added.

Recently, the Malaysian Association of Tour and Travel Agents (Matta) called on the Federal Government to introduce a bigger economic stimulus package compared to the ones it introduced in 2003 and 2009.

In 2003, the Federal Government announced an RM8.1 billion economic package to help Malaysians mitigate the impact of Severe Acute Respiratory Syndrome (SARS) outbreak; while 2009, it announced a RM60 billion stimulus package in face of the global economic downturn.

Darell said that he could not disclose the amount for the proposed stimulus package just yet as the Government still has to identify the problems faced by the stakeholders.

“On this stimulus package, we need to talk to each and every industry. It’s not only tourism (that will be affected) but it will also affect the manufacturing industry, service industry, and any other ordinary businesses,” said Darell.

Fifty-two Chinese associations were also present in the event.

Azis in his speech reminded Sabahans not to be influenced by the racial issues stirred up by the irresponsible individuals with personal agendas.

“They (the irresponsible individuals) want to divide and rule? Once we are divided, they will take advantage to achieve their own goals for Sabah.

“We as Sabahans must ensure that these people will not succeed at what they are trying to do,” said Azis.

He stressed that Sabah is in safe hands under the leadership of Parti Warisan Sabah president Datuk Seri Shafie Apdal and Datuk Darell Leiking – a duo that he likened to Batman and Robin?