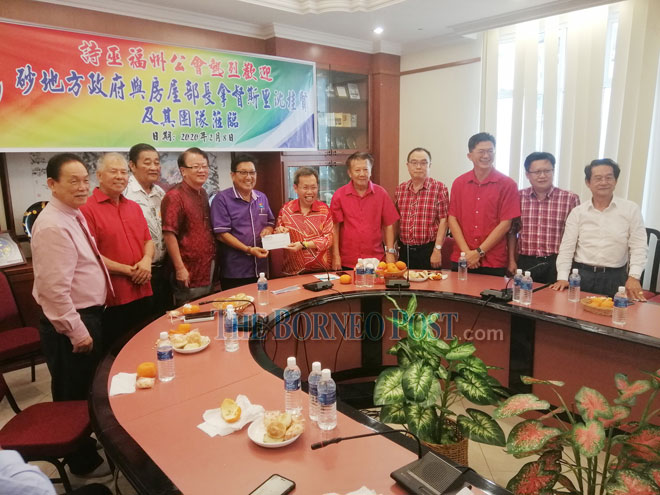 Ying (fifth left) hands over an appeal letter for financial assistance to Dr Sim while others look on.

He said the Foochows were not only hardworking but also very enterprising in making things happen.

“Indeed, they contributed a lot to the growth of the state’s economy, and such enterprising spirit ought to be emulated,” he said during his first visit to the Foochow Association premises at Jalan Salim here yesterday afternoon.

Dr Sim said the Foochows had a long history in Sarawak, dating back some 100 years, and it was through the laborious and hardworking attitude of their forefathers that had eventually turned them into a successful group.

He said many philanthropists came from the Foochow community, and their contributions towards the state development were something to treasure and appreciate.

Touching on the coronavirus outbreak, Dr Sim reminded the people to wash their hands and maintain a hygienic lifestyle.

“Unless the patient is suffering from certain symptoms, otherwise I do not see any necessity to wear the mask. So it’s better to reserve the masks for those who really require them.”

Earlier, Ying, in his brief remarks, said Sibu Foochow Association was one of the biggest associations in the country, boasting some 8,000 members.

He said the association was formed in 1947 by a group of pioneering Foochows aimed at looking after the welfare and interests of the Foochows who came here from China seeking greener pastures.

“Today, 73 years down the road, the association has grown into a big family with members touching the 8,000-mark.”