Wednesday, May 27
You are at:Home»Entertainment»South Korea hails top prize for ‘Parasite’ at Oscars 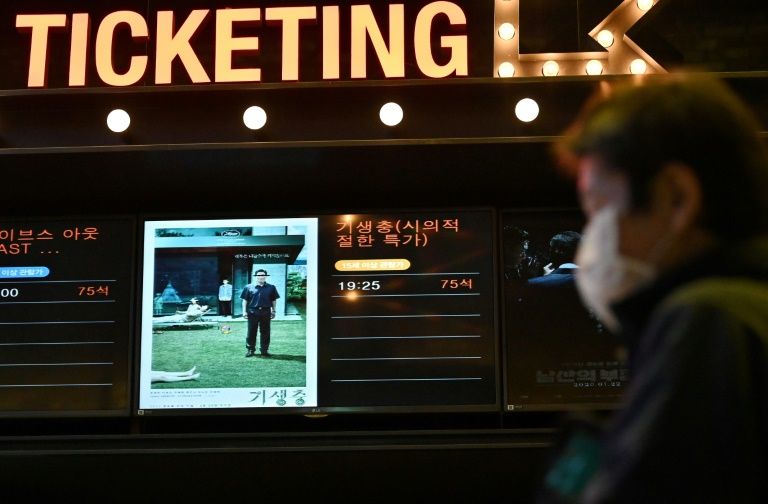 A man walks past a screen showing a poster of Bong Joon-ho’s film ‘Parasite’ at a cinema in Seoul on the day the movie won the Oscar for best picture . – AFP photo

South Koreans reacted with joy and stunned disbelief Monday to the historic best picture Oscar for “Parasite”, with one film fan suggesting the feat should be recognised with a public holiday.

Even President Moon Jae-in got in on the act, saying he was overjoyed to see South Korean cinema receive world recognition.

“I extend my gratitude especially for giving a sense of courage and pride to the (Korean) people,” Moon said.

“I am very proud of director Bong Joon-ho and the cast, as well as the staff members.”

“I am in tears,” one wrote on Twitter. “I’m so proud of Bong Joon-ho. It’s amazing to hear acceptance speeches in Korean.”

Another joked: “Shouldn’t today be declared a public holiday?”

Along with a congratulatory tweet, US ambassador Harry Harris posted a photo of what looked like jjapaguri — an instant noodle dish featured in “Parasite”, where it was unusually garnished with sirloin steak.

The success of “Parasite” comes despite the global dominance of the English language in the 92-year-history of the Academy Awards.

Actor Sandra Oh, the Canadian-born daughter of South Korean immigrants who was among the award presenters in Los Angeles, tweeted her congratulations, saying: “So so proud to be Korean”.

Darcy Paquet, a Seoul-based film critic who wrote the English-language subtitles for “Parasite” said: “I’m so happy… this isn’t real.”

“I hope that all Korean filmmakers can share in this moment and be proud, because it’s the tremendous hard work and professionalism of the industry as a whole that makes a movie like ‘Parasite’ possible.”

“I’ve been following his work for the last 20 years, and I can confidently say he is a true artist,” she told AFP.

“I’m very happy for him as a fellow cineaste in South Korea, as Bong has always been a respected colleague who always remained a socially conscious, outspoken citizen even outside the film industry.”

Shim Woo-hyun, a 31-year-old film fan in Seoul, said: “I heard the news while eating tonkatsu at a food joint, and I was just speechless.

“I screen-captured the news immediately and shared with people through my mobile messenger. I will never forget today’s tonkatsu.” – AFP