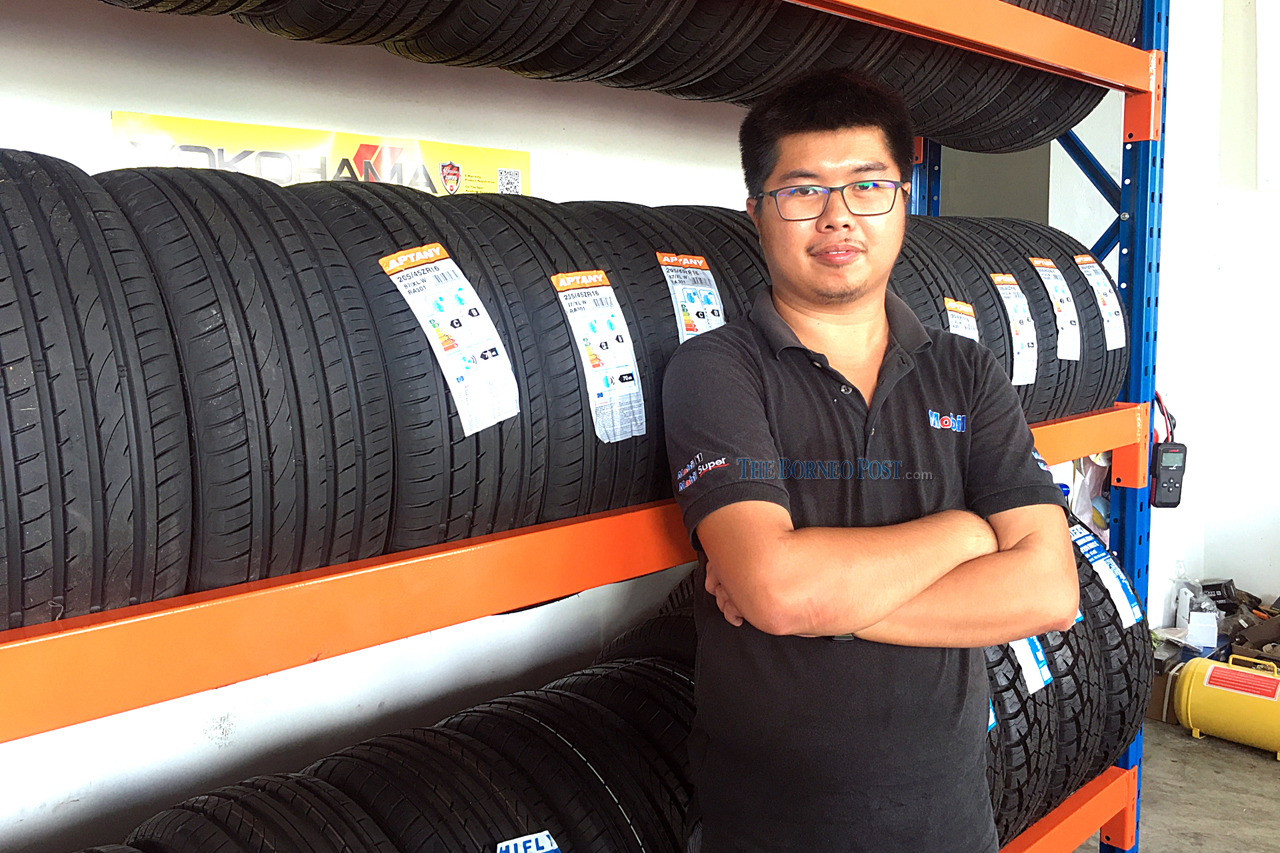 Chung says unlike in Peninsular Malaysia, Sarawak has to pay extra for the shipping and logistics of imported tyres.

KUCHING: Several business owners here are urging the Sarawak government to hold off the implementation of State Sales Tax (SST) on tyres imported into the state.

For one of them, Dream Wheels Centre Sdn Bhd owner Jeshua Chung, his business can only manage a thin margin from sales of tyres even before the implementation of the tax.

This is because, unlike in the peninsula, Sarawak has to pay extra for shipping and logistics.

“In the peninsula, the tyre vendors can obtain stocks directly from the wholesalers or factories (located) just in their backyards.

“But we in Sarawak have to bear with the shipping and logistics costs,” he told The Borneo Post when met at his shop along the Kuching-Samarahan Expressway near here yesterday.

Chung cited an example, where a tyre of a specific brand and type would cost RM180 in the peninsula, but that same variety would cost more than RM190 in Sarawak due to the extra shipping charges.

He believed that should the SST be implemented, that same tyre could cost more than RM10 per piece.

Moreover, he said ‘the poor Sarawak vehicle owners’ would have to deal with bad road conditions that would affect the lifespan of the tyres on their vehicles.

Chung had observed that since brand new tyres had been getting more and more expensive, many Sarawakian vehicle owners would look for cheaper alternatives to replace their damaged tyres, like buying second-hand varieties or just patching up their old ones and continuing to use them beyond their lifespan.

“This will compromise safety and would lead to greater consequences,” he lamented.

Additionally, Chung also called upon the state government to run a more extensive study first before imposing the SST on tyres imported into Sarawak because not only it could affect businesses, but could also compromise safety of road users.

In this respect, he said he had also received the circular from the state Treasury Department – he would have to file the SST returns the latest by the end of this year, since his shop had only been operational for barely a year.

Another tyre shop owner in Tabuan Jaya here pointed out that unlike in Peninsular Malaysia, Sarawak did not have a huge demand for new tyres and thus, his shop had been importing small volumes of tyres.

Nevertheless, he said his shop would still have to cover the expensive shipping and logistics costs.

“Because of this, the cost of tyres in Sarawak is already higher than those in the peninsula – not yet including the SST,” said this shop owner, who requested anonymity.

He also said in the midst of the coronavirus outbreak in China, the cost of importing tyres from the republic had also increased due to limited stocks produced and shipped from there.

“This is also making the prices of the majority of our tyres more expensive,” he lamented.

According to Treasury Department Sarawak’s circular, imported tyres would be charged five per cent SST per piece, while those attached to vehicles being imported into Sarawak would be charged based on the size of the vehicles.

The circular also stated that businesses dealing with tyres and selling imported vehicles must register as taxable persons in accordance with Section 10(1) of the State Sales Tax Ordinance 1998, and Regulation 3 of State Sales Tax Regulation 1998 – failing which the company would be guilty of an offence and liable to a fine of RM20,000; in the case of continued offences, a further fine of RM2,000 for each day would be imposed during, which the offence would still run.

The circular also instructed business owners to fill in a form to be submitted in duplicates to the Comptroller of the State Sales Tax at Treasury Department Sarawak, on or before Jan 31 this year.