Tuesday, July 14
You are at:Home»News»Sarawak»Tip-off leads to discovery of power theft at entertainment outlet in Miri

A member of SEB’s meter inspection team inspects the mains wiring inside the ceiling of the premises at Marina Square.

KUCHING: A recent inspection on a night entertainment outlet at Marina Square in Miri uncovered meter tampering and power theft at the premises.

The joint operation involved the Electrical Inspectorate Unit (EIU) of the Ministry of Utilities, the meter inspection team from Sarawak Energy Bhd (SEB) and also the police.

According to SEB, the technical team from its utilities arm Syarikat Sesco Bhd (Sesco) had conducted surveillance on the premises following public tip-off.

“Upon further investigation, we found that the operator had been illegally tapping electricity from the incoming mains wiring of the supply distribution board. We also discovered illegal direct tapping cables by-passing three electricity meters, which were hidden within the pathway ceiling.

“The meter registered lower power consumption than the actual usage of its daily business operations, recording monthly bills between the range of RM1,500 to RM1,800 per month – an amount unrealistically low for a business of this nature.

“All tampered meters and cables were seized as evidence and a police report was lodged against the operator, who would be called to assist in the investigation.

“The EIU and State Attorney-General (AG) will commence legal action against the premises owner for stealing electricity – a charge under Section 33(5) of Electricity Ordinance,” said SEB in a statement. 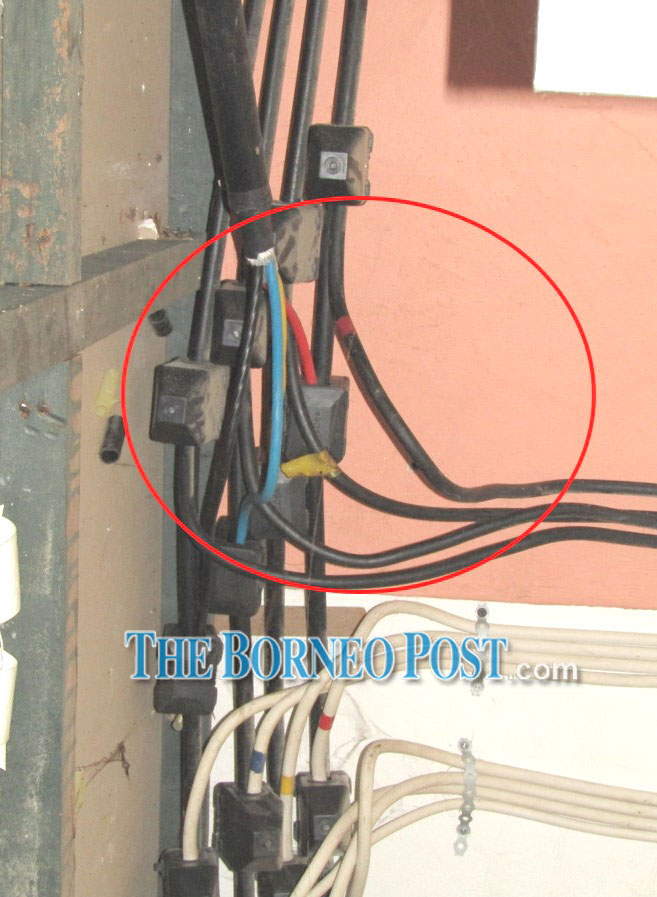 The circled area indicates the direct-tapping cables, hidden inside the gypsum board ceiling.

SEB is mandated to recover arrears or estimated unpaid amounts from the detection of theft by the account-holders.

Power theft is a crime, which carries a penalty of RM100,000 and/or five-year imprisonment upon conviction.

“It is also a dangerous act that endangers lives and damages customers’ properties, including electrical appliances, which could lead to fires.

“SEB will continue to carry out meter inspections and investigative operations throughout Sarawak together with the Ministry of Utilities and the police to curb this dangerous activity.

“Customers are reminded not to trust service providers claiming to be able to reduce electricity bills or allow premises owners enjoy limitless electricity supply through meter-tampering.

“All members of our meter inspection teams are trained to detect tampered meters, including fake meter covers,” added SEB.