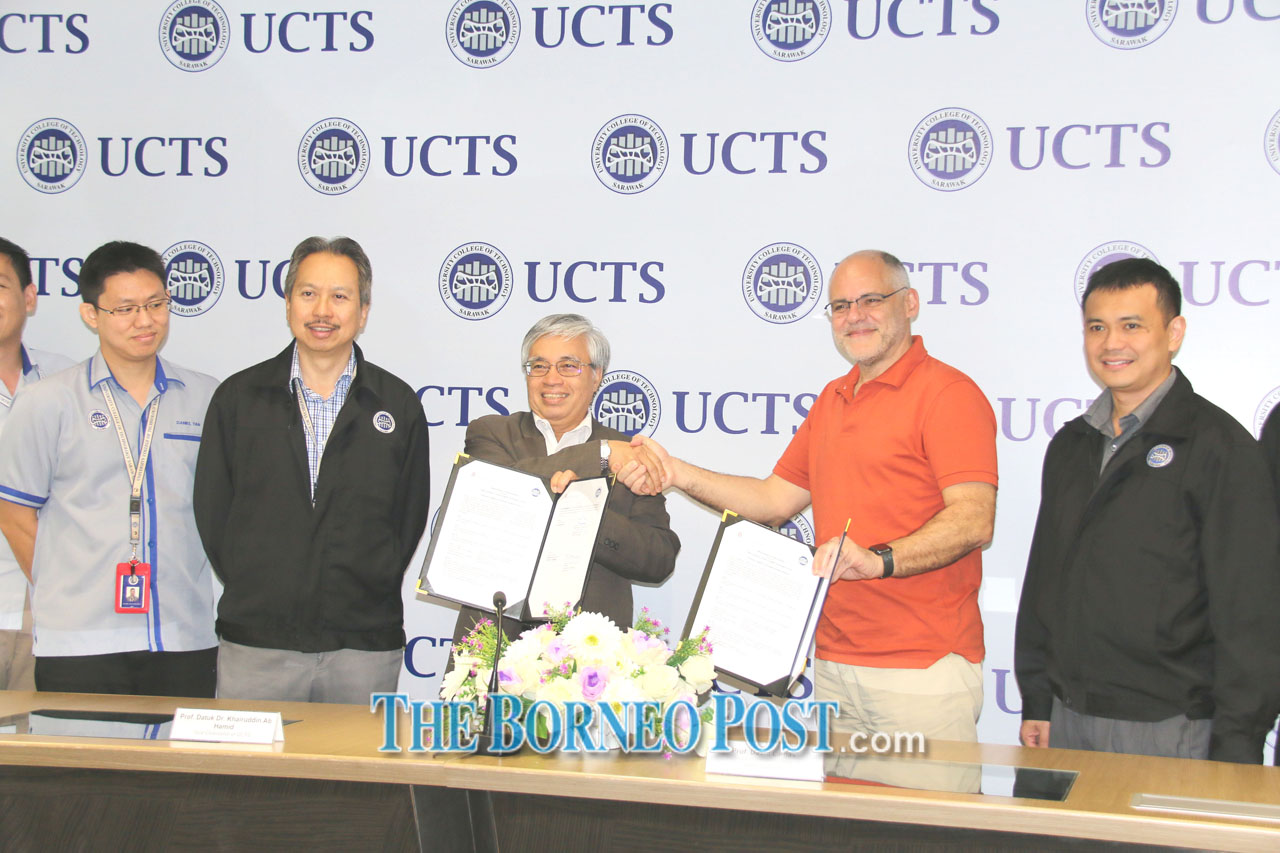 Khairuddin and Lamas (second right) exchange the MoU documents after the signing ceremony.

SIBU: The University College of Technology Sarawak (UCTS) has set another major milestone with the signing of a memorandum of understanding (MoU) with a university in Estonia.

The collaboration signifies UCTS as being the first institution of higher learning from Malaysia to become an international partner with Tallinn University – the third largest public university in Estonia.

The objective of the MoU is to enhance relations between both institutions via joint initiatives such as exchange programmes involving studies and researches, as well as teaching staff and students.

It is also aimed at exchanging information about conferences, seminars and other scientific events of mutual interest.

Speaking prior to the ceremony, Khairuddin said the MoU would enable both parties to explore future collaborative activities slated for supporting Sarawak’s transformation into digital economy, especially in the education sector.

“As a state-owned university, it is our commitment and obligation to support Sarawak government’s initiatives in enhancing the quantity and quality of knowledge-workers and skilled workforce, especially in the fields of digital technology, engineering, technical and vocational training,” he said, as he thanked the School of Computing and Creative Media (SCM) and the Advanced Centre on Sustainable Socio-Economic Development (ACeSSeD) of UCTS for initiating the collaboration with Tallinn University.

He also said UCTS would look forward to working together with Lamas in research and development (R&D) of digital learning ecosystem – one of the main focus research areas in Tallinn University under its School of Digital Technologies.

Adding on, this was seen during a visit by a Sarawak delegation, led by Chief Minister Datuk Patinggi Abang Johari Tun Openg, to Estonia in September 2017 during which, they got to observe the implementation of various e-government initiatives at Estonia’s E-Government Academy (eGA) in Talinn.

“Our Chief Minister was very impressed with the visit – he immediately announced that Sarawak should aspire to become the ‘Estonia of Southeast Asia’.

“Therefore, he expressed his keen interest for Sarawak to collaborate with Estonia in relevant areas slated for transforming Sarawak into a digital economy.

“Additionally, Sarawak is also keen on collaborating with Estonia in other areas such school education system, higher education, and R&D.”

According to Khairuddin, Tallinn – being the capital of Estonia – is listed among the ‘Top 10 Digital Cities’ in the world.

Estonia is also the birthplace of many successful digital technology companies and agencies such as Skype, Transferwise, and North Atlantic Treaty Organisation (Nato) Cyber Defence Centre of Excellence – it has the highest number of start-ups per person among other European countries.

Tallinn University was established on March 18, 2005, by the Estonian Parliament by combining existing institutions.

It is the largest university of humanities in Tallinn, and the third largest public university in Estonia.

It houses almost 7,000 students – 9.5 per cent of them are international students – and about 800 employees, including
nearly 400 researchers and lecturers.