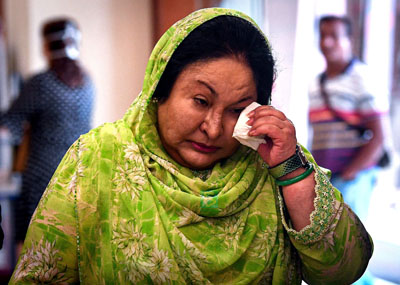 Justice Mohamed Zaini Mazlan reprimanded Rosmah’s lawyer Datuk Jagjit Singh after he repeatedly asked Mahdzir about the allegation that had received a bribe of RM50,000 as reported in a local daily and about his detention by the Malaysian Anti-Corruption Commission (MACC).

“You have already covered this extensively. Why are you repeating the same questions?” the judge asked, which prompted another of Rosmah’s defence counsel Datuk Akberdin Abdul Kader to interject, saying: “(Because) it involves millions of ringgit.”

The judge then asked Jagjit how long he would need to complete his cross-examination and the lawyer said: “Not too long.”

Justice Mohamed Zaini then decided to adjourn the proceedings to the afternoon, but as everyone was leaving the courtroom, Rosmah was seen refusing to leave the dock.

Rosmah’s counsels then asked the judge to resume the proceedings and to allow the afternoon proceedings to be adjourned on grounds that she was unwell.

The court allowed for the trial to continue today.

Earlier, during cross-examination, Mahdzir, 59, said he was not aware that Jepak Holdings Sdn Bhd managing director Saidi Abang Samsudin and his partner Rayyan Radzwill Abdullah had been detained by the MACC.

The witness also disagreed with Jagjit’s suggestion that during the recording of their statements, Saidi and Rayyan had told the MACC that there was a payment of RM50,000 made to him (Mahdzir).

Mahdzir also denied that he was held on remand by the MACC in relation to the allegation, and disagreed with Jagjit’s suggestion that he (Mahdzir) would not be charged if he cooperated with the Attorney-General’s Chambers by testifying as a prosecution witness in the case.

Rosmah, 68 is accused of soliciting RM187.5 million and receiving a bribe of RM6.5 million from Saidi through her former aide, Datuk Rizal Mansor in exchange for helping Jepak Holdings obtain a RM1.25 billion project to provide solar energy to 369 rural schools in Sarawak. — Bernama