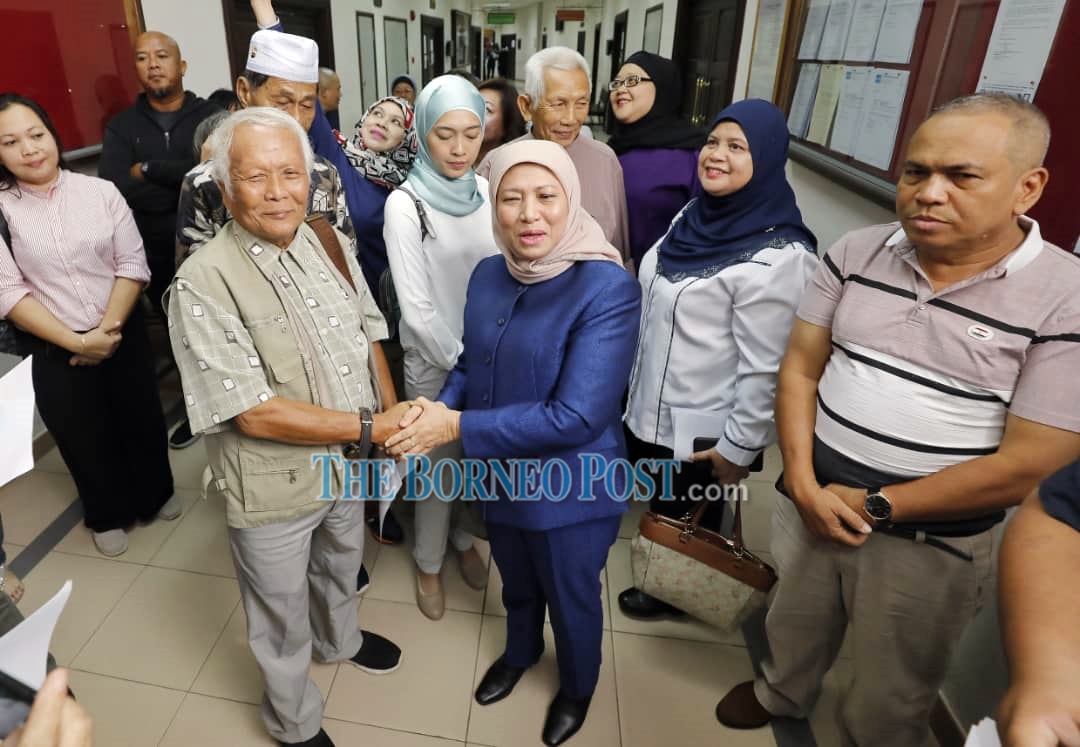 Joseph (left) shakes hands with Nancy upon leaving the courtroom. – Photo by Chimon Upon.

KUCHING: A defamation suit in the Kuching High Court has brought two opposing sides together as friends.

“We have become friends. Today we found a new friend. We found each other because of this case,” said Nancy when met outside the courtroom.

She said she forgave him as she believe that everyone must be given opportunities to redeem themselves, however, there are consequences for defamation.

“While we live in a democratic society that embraces the freedom of expression, we must also understand that such freedom is not absolute, and mustn’t be abused at the expense of others.”

“In this case, I was falsely accused on Friday, May 10 on his personal Facebook account of barring the Tuai Rumah of Sg Bulu (Buluh), Sadong Jaya from hosting a federal minister, and also interfering in the decision of the Tuai Rumah as a non-Dayak, implying that I was stirring up racial discohort, which promoted the invitation of this suit.”

“I am pleased that Mr Joseph Tawi has come to the realisation of his defamatory and false statement where he admitted his wrong doings and retracted with an apology as registered,” she said.

She added that it was good of him to appologise, and not that apology is something she asked for, but more for her own dignity. This was because she knew that she did not do anything that had been alleged and went all out for it and now, Joseph knew that.

“Sarawak is a land that symbolise unity, a multi-cultural, multi-ethnic, multi religious group. We have found each other, found a new friend in each other.”

“It (the case) caused me a lot of distress and my constituents. They are like family to me.”

Joseph on the other hand said he regretted what he has done and appologised to Nancy, which the latter accepted.

“Instead of becoming enemies, we become friends. There is nothing to worry.”

On May 10 and 13 last year, Joseph on his personal Facebook account alleged that Nancy abused her power in directing the Tuai Rumah of Sg Bulu in Sadong Jaya, not to welcome a Federal Minister to the Gawai Dayak celebration last year, and not to co-operate with the newly elected Pakatan Harapan Federal Government.

Both parties have arrived at an amicable settlement where Joseph (Defendant) agreed to apologise to Nancy (Plaintiff) verbally in the open court during yesterday’s hearing and pay costs of RM25,000 with initial sum of RM10,000 to be paid within 30 days.

Joseph also agreed to publish statement of apology on Facebook to Nancy, as well as one copy in The Borneo Post and one copy in the New Sarawak Tribune, within three days from the hearing, and also to remove those Facebook posts.