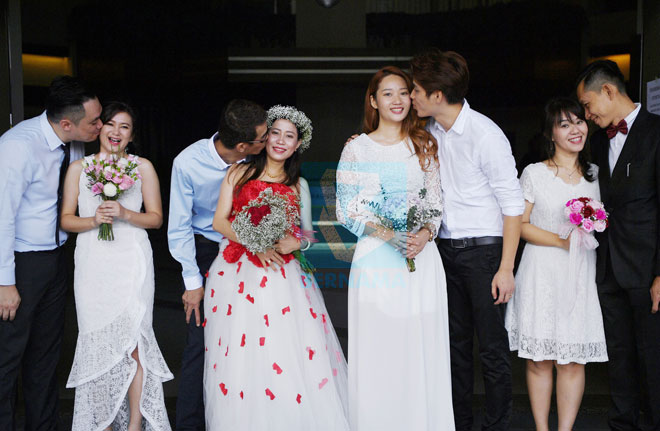 Grooms and brides in a group photo at the National Registration Department’s headquarters in Kuantan yesterday. — Bernama photo

KUANTAN: Businessman Jenson Phua had a good reason when he asked his girlfriend of four years, Christin Loong, to register their marriage yesterday.

Apart from the fact that it’s Valentine’s Day yesterday, Phua, 40, said this day of love will enable him not to forget to celebrate their wedding anniversary in the years to come!

“I have to confess, sometimes a man tends to forget when it comes to dates. We deliberately chose to get married on Valentine’s Day, so I will not have an excuse not to celebrate our anniversary in the future”, he told Bernama when met at the National Registration Department’s (NRD) state headquarters here yesterday.

Phua and Loong were among nine couples who registered their marriage on Valentine’s Day in a simple but memorable ceremony witnessed by Pahang NRD director Juzilawati Kamarudin.

For Tan Mooi Fong, 36, Valentine’s Day this year is the most special compared to previous years, as her secondary school sweetheart Hau Wei Fei, also 36, became her husband yesterday.

Wearing a white dress, Tan said Hau usually planned a romantic dinner on Valentine’s Day but this year, “he kept bugging me to get married and said I would be doing him a big favour as he would remember the date”.

The customary romantic dinner will be replaced by a simple lunch today “with people who have taken time off to be part of our journey as husband and wife”, she added.

Chew asked Wong to be his girlfriend on the same day six years ago, and thought it would be an ideal day to start their new chapter as a married couple.

Meanwhile, Julizawati said in total, 13 couples registered their marriage in Pahang yesterday, comprising the nine in Kuantan, as well as two in Jerantut and one each in Cameron Highlands and Rompin.

On normal working days, the department usually registers one to two marriages, while the numbers increase on special days such as Valentine’s Day.

The director also said that applications had been received from 11 couples who wish to register their marriage on Feb 22 because of the attractive date, while the department also expects to be busy on May 20, a date synonymous with love among the Chinese because the pronunciation of the date in Mandarin is very similar to the pronunciation of the phrase ‘Wo Ai Ni’ (I love you). — Bernama