Monday, February 17
You are at:Home»Uncategorized»Put aside political differences for benefit of S’wak, says Chong 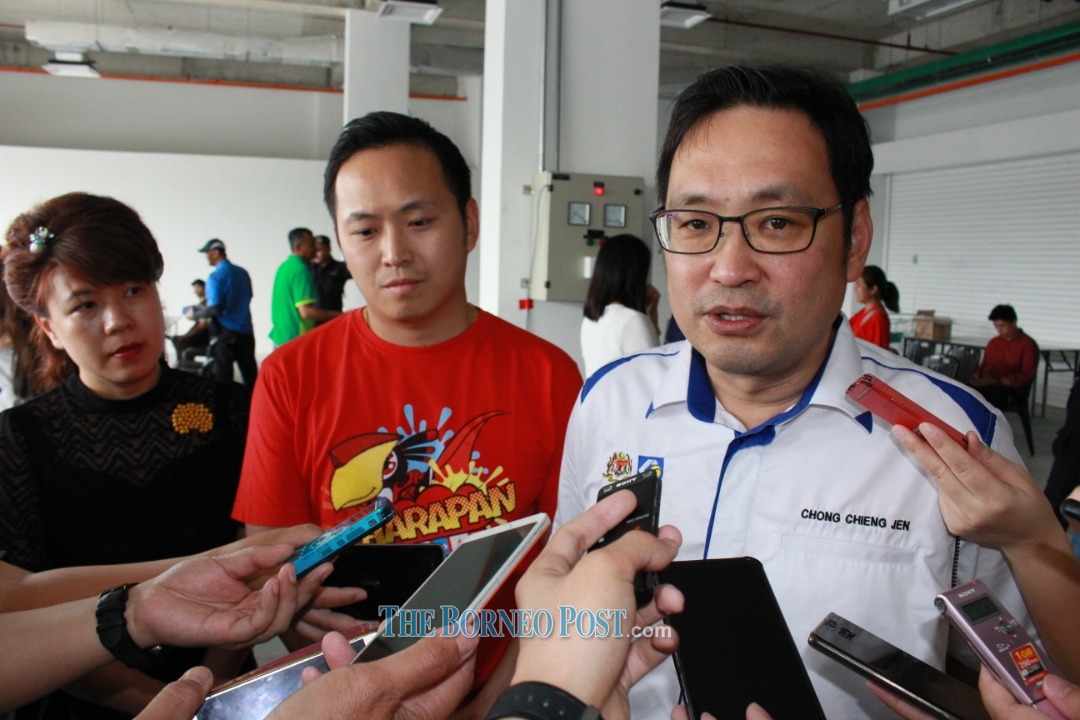 Chong (right) speaking to the press while accompanied by his special assistant Michael Kong (second right) and Pending assemblywoman Violet Yong (left) during the distribution event.

KUCHING: The state government should put aside their political differences so that federal initiatives can be implemented in the state, opines Deputy Minister of Domestic Trade and Consumer Affairs Chong Chieng Jen.

He said this would allow the people of Sarawak to reap the benefits from initiatives organised by the Pakatan Harapan-led (PH) government, such as the distribution of MyFreeview digital television decoders.

“Whatever differences in political opinions (there may be), when it comes to the implementation of (federal) government projects, all these political differences need to be put aside,” said Chong at the distribution of  decoders at Aeroville Mall, Jalan Stutong Baru here today.

He cited the cancellation of a similar distribution event of the MyFreeview decoder, that was supposed to be held at the end of February, despite being approved initially where he claimed the reason behind the approval’s retraction was that the event was organised by the federal government.

Chong said that another case was when a similar myFreeview decoder distribution event at Sibu Community Hall was planned, but the request was not entertained by the state government.

“The non-cooperation from the state government for us to carry out our federal government’s initiative is only making life difficult for people of Sarawak,” said Chong.

As a result, he said a decision was made to engage with the private sector in the state to facilitate the delivering of federal government’s projects, instead of approaching state government’s authorities.

Learning from past experiences, the PH Sarawak chairman remarked the event held at Aeroville Mall today is much orderly and smoothly, where numbers of police personnel could be seen monitoring the distribution.

Eligible members of the public can head to Aeroville Mall today and tomorrow (Feb 16), or go to Emart Batu Kawa on Monday (Feb 17) and Tuesday (Feb 18) to receive the digital television decoders for free between 9am to 4.30pm.

A total of 5,000 units of myFreeview digital television decoders have been prepared for the four-day event, starting today.

Those eligible are listed recipients of the Bantuan Sara Hidup (BSH) B40.

Previous ArticleCovid-19: Over 25,000 doctors from all over China converge in Hubei to fight outbreak
Next Article Australian bushfires extinguished, but climate rows rage on