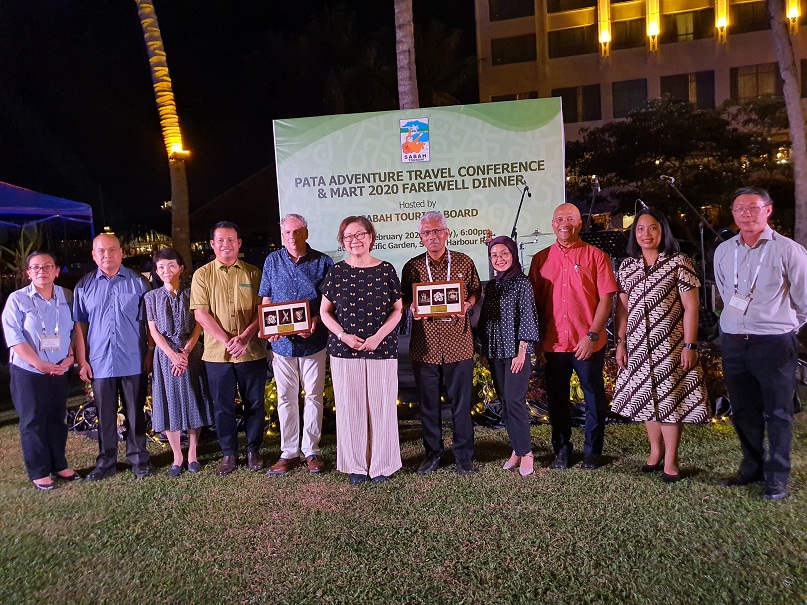 Christina (centre), flanked by Mario (on her right) and Zulkifly, with other guests after presenting tokens of appreciation. Fourth from left is Jamili.

She said the Sepilok Orangutan Rehabilitation Centre in Sandakan is a fine example of such emphasis and was initiated in the 1960s to rehabilitate orangutans for their eventual return to the wild.

“The centre is successful and has continued its mission until today.

In addition, we have the Sun Bear Conservation Centre also located in Sepilok, and the Bornean Elephant Sanctuary in Kinabatangan,” Liew, who is also Minister of Tourism, Culture and Environment, said at the
Farewell Dinner for PATA Adventure Travel Conference and Mart 2020 on Friday. (PATA stands for Pacific Asia Travel Association).

According to her, a sanctuary for pangolins to be located in the Tawau Hills Park is in the pipeline.

Liew said the Government’s most recent approval for the State Elephant Action Plan (2020-2029) was a clear manifestation of its commitment to conservation of the declining elephant population in the state.

“The Plan seeks to protect and conserve the remaining elephant population in the state, estimated at between 1,500 and 2,000, and prevent their extinction,” she explained.

Previous ArticlePrioritize safety to avoid recurrence of Sandakan boat tragedy – Yusof
Next Article Taib: Sarawakians urged to do their bit to help others in need