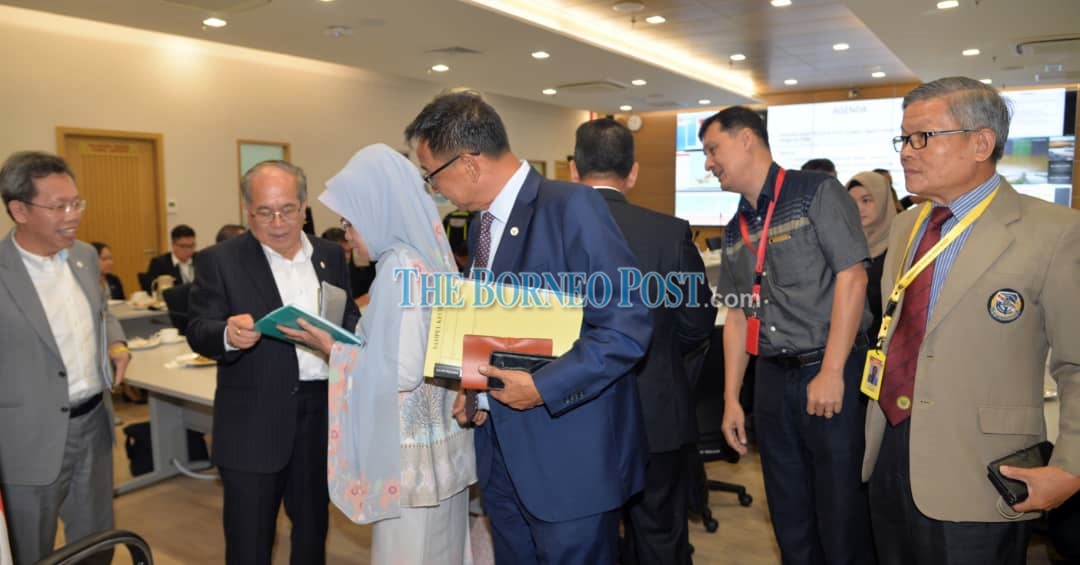 Uggah (second left) going through a matter with Dr Sim (left), Fatimah and Abdul Karim, while others look on.

“I wish to inform all that the forms are given free,” he said, adding that the State Disaster Management Committee have so far given away more than 800,000 of the forms.

Uggah, who is also the State Disaster Management Committee, is glad that arrivals to the state, including foreign nationals, have been truthful in filling in their forms.

He said he was told by the Immigration Department that so far their officers have not detected any false declaration on the travelling history.

“They had counter-checked the declaration against the owners’ passports.

“If the owners concerned had been to China recently, it will show in the passport through the China immigration stamping,” he said during the second meeting of the committee to update on the Coronavirus Disease 2019 (Covid-19) today.

Meanwhile, Uggah added the state has received three new thermo scanners from the Ministry Of Health.

“Two had been installed at the Kuching International Airport and the Sibu Airport where they are now being used.

“The remainder is for the Immigration, Custom and Quarantine Station at Sungai Tujoh where it is being installed and will be operational by February 18,” he said.

The three are in addition to the two existing thermo scanners in Kuching International Airport and Miri Airport for international arrivals.

The State Disaster Management Committee will further provide two more for installation soon at the Sibu and Bintulu Airports.

The State Disaster Management Committee is also advising employers wanting to bring in their workers from China to inform them in advance.

Uggah said all these workers needed to undergo 14 days of self-quarantine.

“The employers will have to provide the quarantine centre. But the bottom line is any workers who has flu must seek immediate medical attention at government hospitals.

“They should not wait for symptoms associated with Covid-19 like fever, coughing or breathing difficulty to develop,” he said.

On local events involving a big group, Uggah said they could continue.

“But those involving foreign nationals from China will not be allowed until further notice,” he said.