Sunday, September 20
You are at:Home»News»Sabah»Eight rooms, staff quarters of resort destroyed in fire 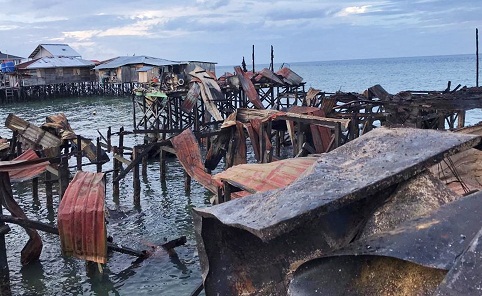 The resort’s properties at Mabul Island that were destroyed by the fire on Tuesday evening.

SEMPORNA: Eight rooms and 10 staff quarters were destroyed in a fire at Uncle Chang’s Sipadan Mabul Dive Lodge near Mabul Island, on Tuesday.

The Sabah State Fire and Rescue Department Operations Centre in a statement yesterday said the centre received the distress call at 5.40 pm, following which 11 members of the Semporna Fire Station headed by Kadir Halalan boarded a cavalier boat and moved to the location.

However, the firefighters failed to reach to the site and had to return to the pier due to the windy and stormy weather, the statement said.

According to the statement, the PGO Sabah also contacted the Malaysian Maritime Enforcement Agency and the Royal Malaysian Navy for marine asset assistance to bring the firemen to the location, but due to the strong winds and sea conditions, this had also failed.

“The fire was believed to have originated from one worker’s house to the other houses, and resort workers and villagers used diesel water pumps and fire extinguishers to put out the fire. They also had to demolish a bridge to prevent the fire from spreading,” he added.

However, no injury or loss of life were reported.

A team from the floating station and an investigation team from Tawau were able to reach the scene at 8.40am yesterday to monitor, evaluate and investigate the fire.