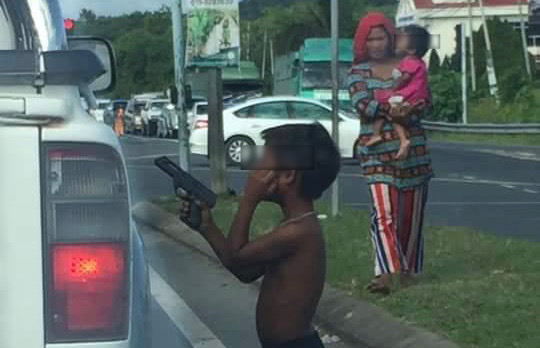 The boy with a toy gun while begging at Bandar Sri Perdana traffic light.

LAHAD DATU: Police have detained four Palauh women and 11 of their children for not having any identification documents.

District police chief, ACP Nasri Mansor said all the women aged between 24 and 31 were detained while begging for money at the traffic light in Bandar Sri Perdana and Taman Aman Jaya about 10.30am.

Nasri said his men launched Ops Kesan/Ops Cantas after receiving an information about a photo of a Palauh kid holding a toy gun while begging for money at the area.

The team later rushed to the scene and conducted inspection, and four women with five boys and six girls were later detained for not having any documents.

“Initial investigation found that a Palauh kid was holding a toy gun which was given by his mother to play with other children,” he said.

According to Nasri, all the individuals were brought to the Lahad Datu Police headquarters for further action.
Nasri said they would get confirmation on the status of their documents and travel recrods for the individuals from the Immigration Department.

He added that investigation was still ongoing under Section 6(1)(c) of the Immigration Act 1959/63.