Tuesday, December 1
You are at:Home»News»Crime»Man sets fire to SUV during return journey to Sambas 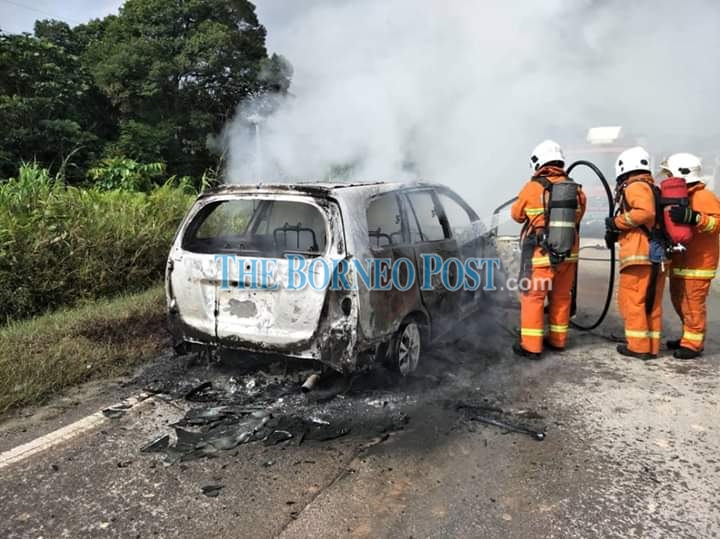 SARIKEI: A sports utility vehicle (SUV) bearing an Indonesian registration plate, was totally destroyed after it was allegedly set on fire by a mentally challenged passenger.

Sarikei District Police Chief Supt. Awang Arfian Awang Bujang said the driver was driving back to Sambas in Kalimantan with the 28-year-old male passenger when the latter started the fire at Sungai Nyelong Bridge 2, about 20 kilometers from here this morning.

He said the driver had crossed the border into Sarawak from the Indonesian province just to fetch the passenger who was working in a palm oil plantation in Sibu at the request of the passengers family as he was said to be mentally-challenged.

“Based on our initial investigation, the passenger had suddenly started the fire with a lighter while the car was moving,” said Awang Arfian.

He said the passenger, who has been detained for further investigation, would be referred to the hospital to ascertain his mental health.

Awang Arfian said the police has not received an official report from the the driver and as such has not classified the case.

Meanwhile, Sarikei District Fire and Rescue Department Chief Mahmudin Narudin said that on receiving a distress call at 9.20am, they deployed a team of 11 firefighters to the scene.

However, when his men arrived about 20 minutes’ later, the vehicle was completely engulfed and it took his men 15 minutes to douse the fire.