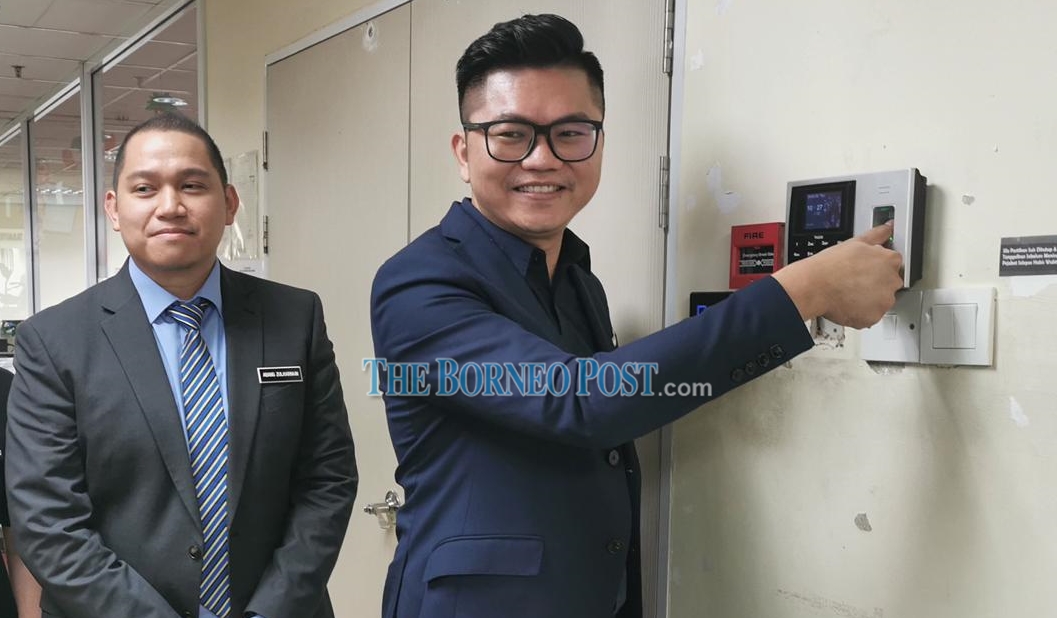 Wong places his thumb on the biometric fingerprint time clock while reporting for his first day on duty as the new LPKP Sarawak chairman. With him is Abang Zulkarnain. – Photo by Roystein Emmor

He explained that the subsidy programme will go towards elevating bus services in Sarawak as well as ensure proper and complete planning of the state’s public bus network.

“I have been tasked by the (federal) Ministry of Transport to look into the state’s public transport network in all major cities and towns in Sarawak starting with the public bus service.

“LPKP has an important role to play because in addition to issuing license for commercial vehicles, we also have the duty to ensure that the public bus service routes available in Sarawak are beneficial for the people,” he told a press conference after reporting for duty at CVLB Sarawak headquarters at Bangunan Sultan Iskandar here today.

The Padungan assemblyman said the current bus services provided in cities and satellite townships in the state were relatively poor.

Furthermore, he pointed out that despite the 227 stage bus licenses issued by CVLB Sarawak at present, it does not seem that there are over 200 buses in operation in the state.

“Are they (license holders) really using the license to run the bus? That is the problem we want to look into.

“Can you imagine over 200 bus licenses issued in Sarawak, which I believe it’s not enough but we can’t even feel the effect of the 200 over [buses],” he said.

Though Wong does not have the figure for the number of buses in operation, he gave his assurance that CVLB Sarawak will look into this issue seriously.

When asked on why the stage bus licenses were issued in the first place if the license holders were not carrying out the bus services, he believed that they met the conditions required to obtain the license.

“That was the previous application and once the conditions are satisfied, normally CVLB will issue the license. I believe that is the practice.

“But I feel that we should do more than that and not just be a licensed issuing body but we have to make sure the license issue is effective in benefiting the people,” he said.

In view of this, he stressed that proper planning of the state’s public transport network must be taken into consideration.

“It is through planning that we know what kind of license or what are the rules to enforce when we issue the licenses.

“We will not issue licenses blindly but intelligently. We will do it in more foresight in which we need to foresee what will happen and what is beneficial to the people as a whole when we issue the licenses,” he said.

He also said he has instructed his officers to arrange for a meeting with all stakeholders to obtain their feedback on what issues or difficulties they are facing in relation to CVLB’s jurisdiction.

CVLB Sarawak has three offices in the state namely in Kuching, Sibu and Miri which handle all applications related to commercial vehicles such as bus, school bus, taxi, lorry and e-hailing services.

It has issued a total of 49,991 commercial vehicle licenses in the state thus far.