Saturday, January 23
You are at:Home»Columns»Just another point of view»Beware the Ides of March – my 15 minutes of fame

IT was Andy Warhol who said that everybody will have his 15 minutes of fame in the future.

The term 15 minutes of fame is a “short-lived media publicity or celebrity of an individual or phenomenon”. The expression was inspired by Warhol’s words “In the future, everyone will be world-famous for 15 minutes”, which appeared in the programme for a 1968 exhibition of his work at the Moderna Museet in Stockholm, Sweden.

This is my story of my personal 15 minutes of fame, which occurred four years ago in 2016, on March 15, 2016, when as the ‘fixer’ for the ABC News (Australia) film crew of Linton Besser and Louie Eroglu, we were taken in for questioning by the law for eight hours. 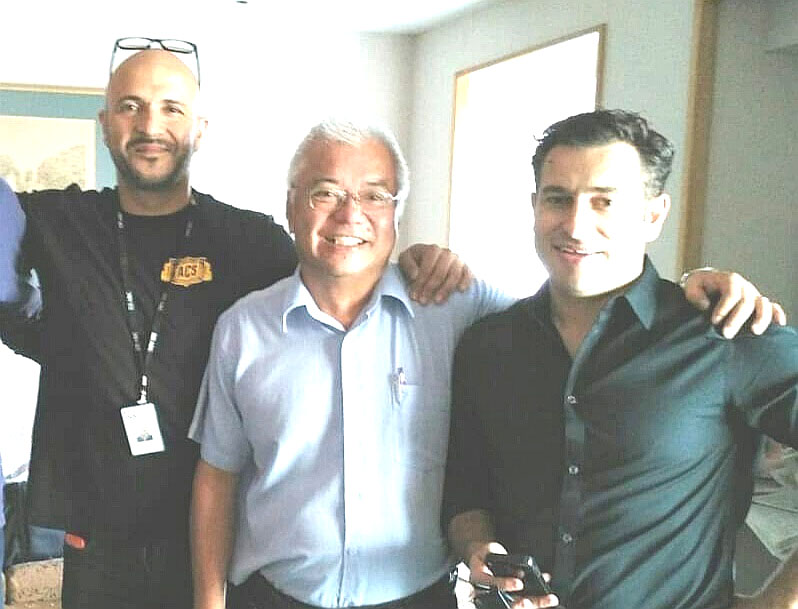 (From left) Eroglu, Ong, and Besser.

It started with a phone call the day before from my good friend Alan D’Cruz in Kuala Lumpur; Alan is well known for fixing news agencies and documentarians from all over the world whenever they come to Malaysia for filming current news stories and feature documentaries. He had a two-man crew from ABC News from Sydney, who were on their way to Kuching to film an interview segment to complete their very high profile ‘4Corners’ special feature called ‘State of Fear’ about the 1MDB financial scandal and the involvement of then Prime Minister Najib Razak.

Najib was scheduled to pay a walkabout visit that evening at Kampung Semaba, a small Malay kampung along the Kuching-Serian road, just off the main Pan Borneo Highway at Mile 7. I was their guide and fixer.

There was a sizable crowd at the local community hall when we arrived at around 8pm. We had waited a few minutes before Najib himself had arrived with an entourage which had included the IGP and the Commissioner of Police Sarawak. Security was very tight. The ABC news crew were set up along the path that he was going to take. As he alighted from his transport and was walking towards the hall to make an address, Besser – the investigative journalist for ABC News – had managed to briefly stop him by asking aloud “Mr PM, can you tell us about that RM2.6 billion that’s in your bank account?” Najib was rather shaken, had paused briefly and looked at Besser and video journalist Eroglu, then red-faced had walked briskly away towards the hall.

All hell broke loose then – and never for a minute could I imagine what happened right then and there – the head of police of Padawan Ng Ah Lek and his men had quickly surrounded the newsmen and demanded to know what they were doing, how they got there, and what permission did they have for asking Najib such a question. I was just a stone throw’s away in the crowd having just had a quick word with Datuk Dr Sim Kui Hian, who was there as well. I wanted to collar him for a short interview later. It was not to be.

Besser and Eroglu immediately sensed something was amiss and I had to speak with the police there to say that they were an ABC News team here to cover the night’s events and had not meant any harm but were only doing their jobs. I told him they were under my care. We quickly went back to our van and took off, and while inside the vehicle discussed among ourselves and thought it best that they take the next flight out instead of staying the night as was their original plan.

I had given my contact number to the police in charge and when we arrived at the airport, a call came through saying that we were required to go to the Padawan Mile 7 police station for questioning. Of course I told them we’d be there after we had checked in at the Four Points by Sheraton (now Century Hotel) near the airport. Upon arrival at the hotel a few minutes later, there were policemen already waiting to ‘escort’ us to the station; we followed.

It took a while before the head of the station had attended to us, no doubt getting his instructions from his superiors. At about 10.30pm, I was brought in and personally questioned; I told him the exact sequence of events which had involved my escorting and guiding the newsmen for the Najib encounter. The ABC News crew meanwhile had called their head of operations in Australia, who in turn had called Americk Sidhu, their legal retainer in Malaysia. Americk was in Kuala Lumpur and he had asked me to contact Albert Tang in Kuching to represent us.

We were at the police station for eight hours till 4.30am the following day, just being questioned. Ng had earlier told me that I could leave and go home as I was no longer required after my questioning; in turn I had replied that the news crew was under my personal care and their safely and well-being were my responsibility and concern – there was no way I would leave them on their own at the station; I told him that I would stay with them till they were allowed to leave.

The police personnel at all levels had acted with the most professionalism and I take my hat off to them, especially Ng, who has since retired.

This small ‘international incident’ of an Australian news crew who came to Kuching to ‘interview’ Malaysia’s scandal-tainted prime minister and were ‘detained’ by the law in the process – had already made major world headlines from CNN in the USA to BBC in the UK, to all the major news channels around the world. ABC News itself covered the story by sending in their nearest news crew based in Jakarta, who flew in the very next day and stayed till the duo were allowed to fly out four days later!

My 15 minutes of fame was beamed around the world with news footage of Besser, Eroglu, Tang, and myself – coming out of the police station, at the hotel lobby, and at the airport. Family and friends were shocked to see me on their television sets in Europe and Australasia, and had called to express their concern on my welfare.

Warhol was right after all – we all do get to have our 15 minutes of fame, but he never said it could also be dubious infamy! Eroglu and I are still in contact to this day. He still works at ABC News.