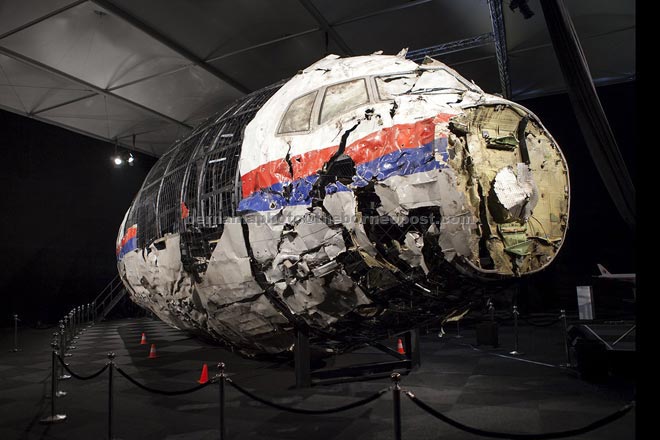 File photo showing the downed MH17 plane that has been reconstructed. — Bernama photo

THE HAGUE: The Dutch Safety Board has praised the Malaysian team for their cooperation in recovering the black box of MH17 from the crash site in the conflict-torn eastern Ukraine in 2014.

Senior aviation investigator in charge Gijsbert Vogelaar said the black box was a critical piece of evidence in the board’s investigation to identify the cause of the plane crash.

“The Malaysian people did a very good job to get the recorder (black box),” he told members of the Malaysian media here during a special meeting in the run-up to the MH17’s trial, scheduled to commence tomorrow (March 9).

Vogelaar said several Malaysia Airlines pilots and crew members were invited to listen to the black box recordings to facilitate the investigations.

“Later, we had another captain of Malaysia Airlines to listen to the conversations recorded (by the black box) because he knew the (MH17) pilot personally. It was very hard for them (Malaysia Airlines pilots and crew members) to (listen to the recordings), but they did a good job,” he said.

The team that was tasked with entering the crash site was led by Colonel Mohd Sakri Hussin who was then the National Security Council principal secretary.

A black box consists of two boxes – a cockpit voice recorder and a data recorder.

The flight data recorder records a stream of flight information while the cockpit voice recorder stores conversations and other noises made in the cockpit.

Meanwhile, a member of the board Marjolein van Asselt said the outcome of their investigations could not be used as evidence in the trial, and the board members also could not be called as an expert witness in the proceedings.

“We have led the investigations and our work is done. I’m now an ordinary citizen when the trial starts.  We can follow the proceedings but we are not, in any way, involved in the trial. We have already interpreted our mandate to the maximum,” she said.

“Our report and the outcome of our investigations cannot be used in the trial. We are not here for blame and liability,” she said.

She added that the trial would not bring back those who were killed in the incident but instead would reopen the old feelings of the loved ones.

“As for me, I can say I would look at it with mixed feelings,” she said.

The criminal proceedings against four men accused of shooting down the plane will commence before the District Court of The Hague at the  Schiphol Judicial Complex (JCS) in Badhoevedorp.

Flight MH17 was travelling from Amsterdam to Kuala Lumpur before it was shot down while flying over the conflict-hit eastern Ukraine. The incident killed all 298 people on board, including 15 crew members. – Bernama

Previous ArticleTransport Ministry to meet PM over compensation for next-of-kin of MH370 victims
Next Article Muhyiddin agreed to 3 conditions set by GPS to be in federal govt, says Abang Johari