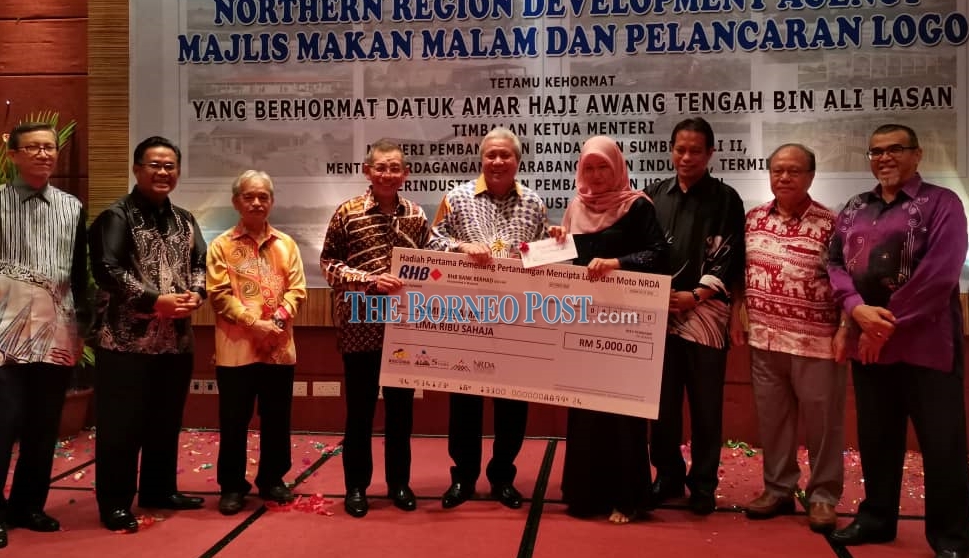 Awang Tengah presenting the mock cheque to the representative of the logo design winner as others looks on.

“The Chief Minister told me that he wished that he had used the NRDA model of repairing and upgrading schools for the RM700 million already paid upfront, where NRDA has already tendered out 54 projects now,” he said at the launch of the agency’s logo and motto at Hotel Seri Malaysia on Sunday night.

NRDA roped in all stakeholder, including school headmasters and principals, community leaders, consultants and government agencies for a brainstorming lab before undertaking technical design and fast-tracking projects roll out.

The holistic approach included value management labs in Kuching and stakeholders brainstorming session to identify schools and the type of repairs and upgrading needed.

Awang Tengah said NRDA, together with Upper Rejang Development Agency and Highland Development Agency (HDA) have a big responsibility to repay the trust of the Chief Minister and meet his high expectations of delivering the projects with RM1.5 billion funds allocated to them respectively for two years.

NRDA has been given the added responsibility as implementing agency for the coastal road project between Miri and Lawas to provide the missing link in the Pan Borneo Highway project, linking Brunei.

All the three agencies are under Regional Corridor Development Authority (Recoda) which is chaired by the chief minister, and the RM4.5 billion were allocated over and above the normal budget under the 11th Malaysia Plan.

The state government has already put in place a comprehensive development masteplan for Limbang Division for the short, medium and long term plans for Lawas and Limbang districts.

The masterplan would be tweaked and fine-tuned to adapt to the changes with the introduction of coastal road and its impact as NRDA move to maximise the strengths and advantages of this region in boosting the socio-economic development of the region.

“We have strategic location, highlands, lowlands, people, cultures and other advantages which we must tap to realise our true potential in Limbang and Lawas,” he said.

Ismawi said Recoda as the authority of one of Malaysia_s economic corridors will strive to be on par with its peers.

He said it has undertaken innovative steps and introduced fast-track implementation model to roll out the many projects tasked under Urda,HDA and NRDA.

“With this model, tender can be called using preliminary engineering design where surveys can be carried out using Laidar system,saving time to get SPA (State Planning Authority) approval for road alignment and building siting, he said.

Consultants of various disciplines were appointed and work were parcelled out in packages to speed up the implementation processes.