Wednesday, December 8
You are at:Home»Business»Oil plunges most since Gulf War on Saudi-Russia standoff, virus 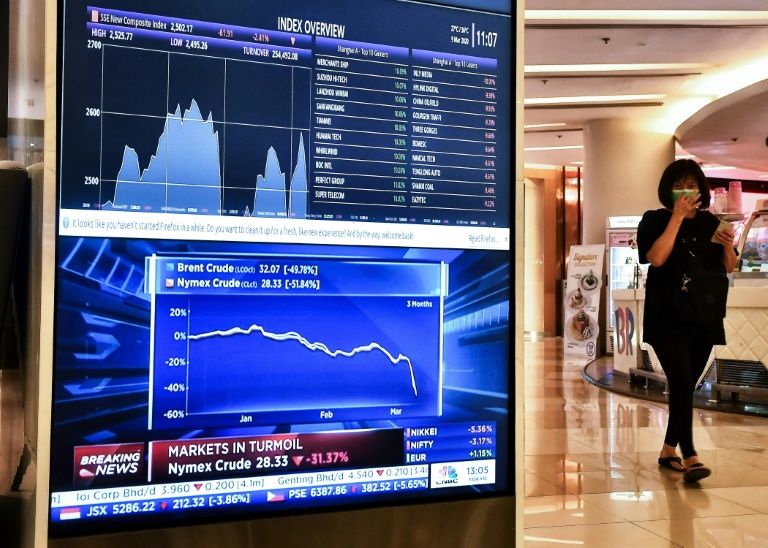 The collapse in oil prices could have far-reaching consequences, observers warn, from battering revenues in energy-dependent countries, to triggering the cancellation of oil exploration projects and even sparking global deflation. AFP Photo

Saudi Arabia had been pushing for a large reduction in the face of a dramatic coronavirus-fuelled slump in demand but Russia balked, preferring to stick with what it had in an effort to preserve income.

The stand-off sparked ferocious trade as the world’s benchmark crude contracts, Brent North Sea and WTI, each nosedived as much as 30 percent, before recovering slightly.

In earlier Asian trading hours, WTI had hit $27.34 per barrel, the lowest level in more than four years. Brent struck a similar low at $31.02.

Saudi’s “price drop might be a shot across the bow to bring producers, notably Russia, back to the negotiation table” over production cuts, said Harry Tchilinguirian, a commodities analyst at BNP Paribas.

At a meeting last week of the Organization of Petroleum Exporting Countries, cartel kingpin Saudi Arabia headed a push to reduce output — but non-member and major oil producer Russia refused, looking to preserve its own market share.

Incensed by the move, Riyadh responded Sunday by driving through the biggest cuts to Saudi prices in 20 years — while raising output, unleashing pandemonium on crude markets.

“The fall-out between the two heavyweight producers caused an earthquake in the oil market,” said analyst Tamas Varga at oil broker PVM Associates.

Saudi Arabia cut its price for April delivery by $4-6 a barrel to Asia and $7 to the United States, with Saudi oil giant Aramco selling its Arabian Light at an unprecedented $10.25 a barrel less than Brent to Europe, Bloomberg reported.

At the same time, the kingdom said it would hike its own oil production to more than 10 million barrels per day from April.

“In doing so, Saudi Arabia has launched a new price war for market share,” Commerzbank said in a note to clients.

“Thus the oil market risks seeing a massive oversupply also in the second quarter, especially as demand is likely to remain badly hit for some time yet due to the COVID-19 pandemic.”

The International Energy Agency (IEA) warned meanwhile that the world is set for its first annual decline in oil consumption in more than a decade owing to the impact of the coronavirus outbreak.

Further carnage on world crude markets is reminiscent of an oil price war that erupted in 2014 that sent a barrel crashing to less than $30.

Global stock markets, already sliding on coronavirus fears, saw a very sharp sell-off Monday as the oil, energy and mining majors all tanked, taking everything else with them. – AFP