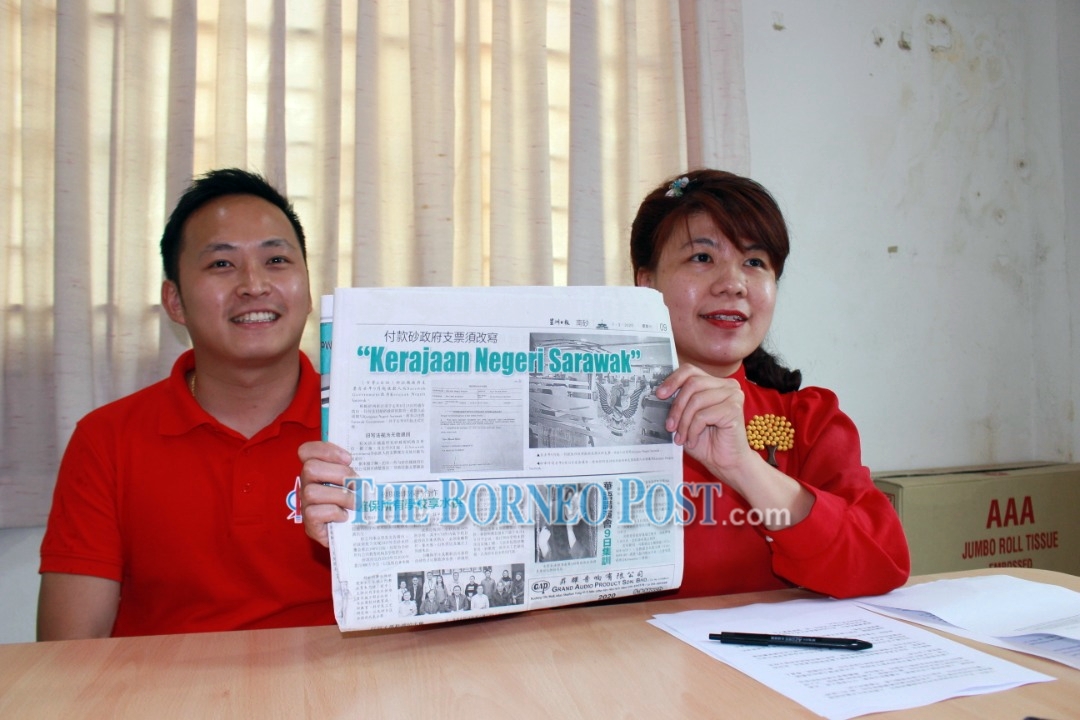 KUCHING: Pending assemblywoman Violet Yong has questioned the rationale behind a recent circular requesting all cheque payments made to the Sarawak government indicate ‘Kerajaan Negeri Sarawak’ as payee instead of ‘Sarawak Government’ as practiced previously.

Yong was perplexed by the changing of the payee’s name from English to Malay language, especially given it was done without any official announcement being made to the public pertaining to the change.

“Such an act in essence is an erosion of the rights as enshrined under the Malaysian Agreement 1963 (MA63) in particular the status of English as the second official language of Sarawak,” said Yong at Sarawak Democratic Action Party (DAP) headquarters here today.

Yong was responding to a local Chinese daily’s news report that a circular dated Aug 15, 2019 was issued by the Sarawak State Accountant pertaining that all cheque payments to the state government should indicate ‘Kerajaan Negeri Sarawak’ as payee.

The DAP state lawmaker specifically pointed out the insertion of the word ‘Negeri’ – which means ‘State’ in English” – in the payee’s name of the cheque payable to state government, as it has “downgraded” the status of Sarawak as founding territories of the Federation of Malaysia.

She added that cheques payable to the state government written with ‘Sarawak Government’ as payee had been practised since the Brooke era until recently.

“The latest circular regarding the matter goes against what the Gabungan Parti Sarawak (GPS) coalition government has been championing all this while, such as returning the rights of Sarawak under MA63,” she said.

She questioned the purpose behind the changes and asked the state government to revert to the previous practice of indicating ‘Sarawak Government’ as payee, instead of “Kerajaan Negeri Sarawak”.

“I urge the state GPS government to immediately retract the circular and maintain the previous practice, whereas all cheques made payable to the state government be issued in favour of ‘Sarawak Government’,” said the Pending assemblywoman.