Sunday, October 17
You are at:Home»News»Uggah: Masterplan for Native Courts to be submitted to Sarawak govt in October 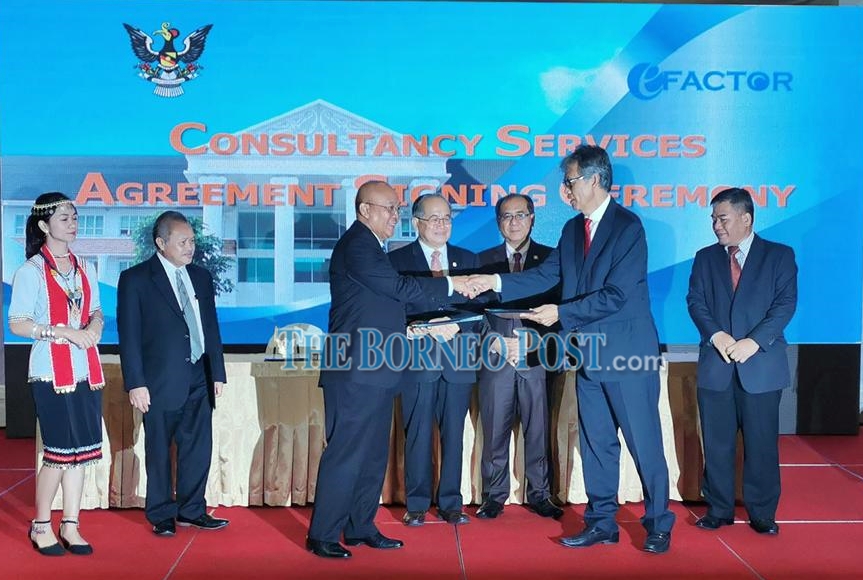 KUCHING: The masterplan for the Native Courts of Sarawak is expected to be submitted to the Sarawak government in October this year, says Deputy Chief Minister Datuk Amar Douglas Uggah Embas.

Following the submission, he said the government will consider and implement the recommendations in order to transform and elevate the Native Courts into independent and autonomous judicial institutions much like the Syariah and Civil Courts.

“This will help the native communities in Sarawak to progress more systematically with greater confidence in tandem with the overall development of the state,” he said at the Consultancy Services Agreement Signing Ceremony between the Sarawak government and The E-Factor Sdn Bhd for the Study on the Restructuring and Elevation of the Native Courts of Sarawak at a leading hotel here today.

He said a study on the restructuring and elevation of the Native Courts of Sarawak had commenced on Jan 6 and is expected to be completed on Oct 9 this year with the Office of the Chief Registrar, Native Courts of Sarawak appointed by the state government to administer and coordinate the study as well as to serve as the secretariat for the Steering and Technical Committees.

The nine-month study is primarily aimed at enhancing the relevance and status of the Native Courts in the administration of justice pertaining to native laws and ‘adat’ of the native population in Sarawak.

“We hope that the findings and recommendations of the study will in time provide the basis and justifications for restructuring the current organisational set up including the legal and institutional capability and address other issues which affect the transformation of the Native Courts of Sarawak.

“Therefore, part of the study will also look at the causal factors that impact positively and/or negatively on the ways of life of the natives, in terms of their ‘adat,’ custom and usage,” said Uggah, who heads the study’s steering committee.

The Agriculture, Native Land and Regional Development Minister said the attributing factors could be in the form of dynamic forces of politics, the economy, society, technology, environment and legislation.

“This contributes to inevitable changes within the Native Courts in terms of its jurisdictional powers and functions, the administrative structure and its capacity.”

He also said that the study will need to strike a balance between the duality of the native world and their world views within the contest of introduced public policies.

“The study will employ various methods for data and information gathering including field surveys, interviews, discussions through workshops, labs and focus groups, site and department visits as well as conducting comparative study aided by desktop research and literature reviews,” he said.

He added that the study will also look into the Syariah Courts of Sarawak, the Civil Court, the Maori Land Court in New Zealand, the National Native Title Tribunal in Australia, the Sabah Native Courts and others to gain further insights on common principles, learnings and good practices that can be considered as strategic initiatives in the preparation of the masterplan for the native courts of Sarawak.