Sunday, November 28
You are at:Home»News»First OSEIC in state expected to begin operations in June 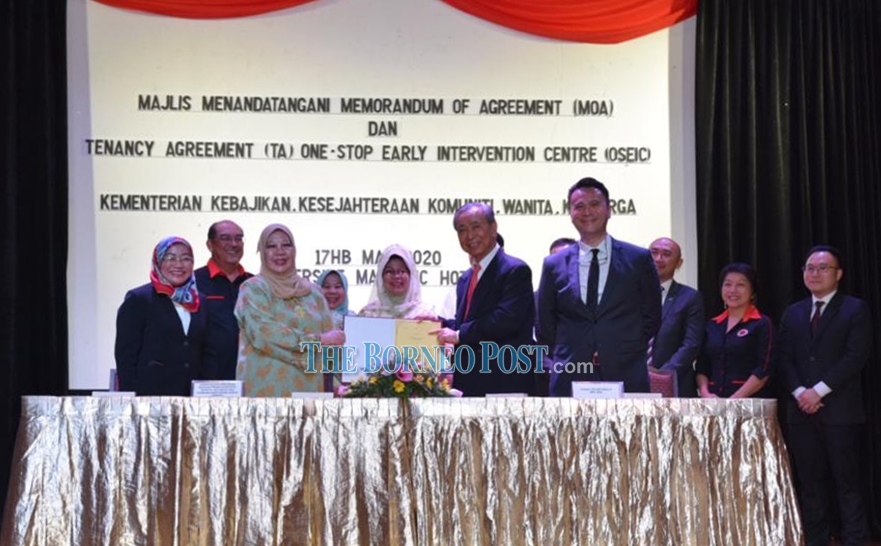 Fatimah (centre) and others present witnessing the exchange of documents between Chong and Saadiah. — Photo by Roystein Emmor.

KUCHING: The first One-Stop Early Intervention Centre (OSEIC) in the state is expected to begin operations in June this year.

Welfare, Community Well Being, Women, Family and Childhood Development Minister Dato Sri Fatimah Abdullah said that the OSEIC would be handled by the Society for Parents of Children with Special Needs (Pibakat).

She added that it was a joint development between the state government and Petronas through its corporate social responsibility programme.

“The OSEIC, which will be situated at Metrocity in Jalan Matang here, is still in the renovation process and is expected to be completed at the end of May this year.

“The facility will provide services such as early diagnosis, early intervention, rehabilitation and early education that is suitable for children with autism spectrum disorder, Down syndrome and learning disabilities.

“Thus it will be outfitted with a diagnosis centre, early intervention centre, pre-school, a play area and therapy centre for children up to the age of six years old who have been diagnosed with certain disabilities before they enter pre-school,” Fatimah said in a press conference after witnessing the signing of a Memorandum of Agreement and Tenancy Agreement for the OSEIC here yesterday.

Touching on the signing ceremony, Fatimah said that the ceremony was meaningful because she believed the OSEIC would give a longterm positive and sustainable impact not just for children with special needs but their parents and the community at large.

“We will emphasise on early intervention because we truly want this to be a one-stop centre and we believe that when intervention is given at the early stages, the rate of successful rehabilitation for children with special needs is much higher,” she explained.

Fatimah said that if the children receiving early intervention and rehabilitation at the OSEIC showed positive changes in their behaviour and capability of being self-sufficient, they could be recommended to enter mainstream schools.

She also emphasised the importance of children with special needs being integrated with their normal counterparts, as she believed that an inclusive education could help them learn and socialise better.

“This is a win-win situation for normal children because they can learn the traits of children with special needs, especially with the help and support of teachers,” Fatimah said.

Fatimah also wished to thank Petronas and Chong Kia Hoi Realty Sdn Bhd for helping the state government realise their dreams of having the first OSEIC in Sarawak.

“We hope that this kind of cooperation, especially from Petronas, can continue because the state government wishes to establish a vocational institute in Sarawak specifically for children with special needs in the future,” she added.