Saturday, May 15
You are at:Home»News»Longhouse in Miri imposes RM2,000 fine on outsiders to safeguard community from Covid-19 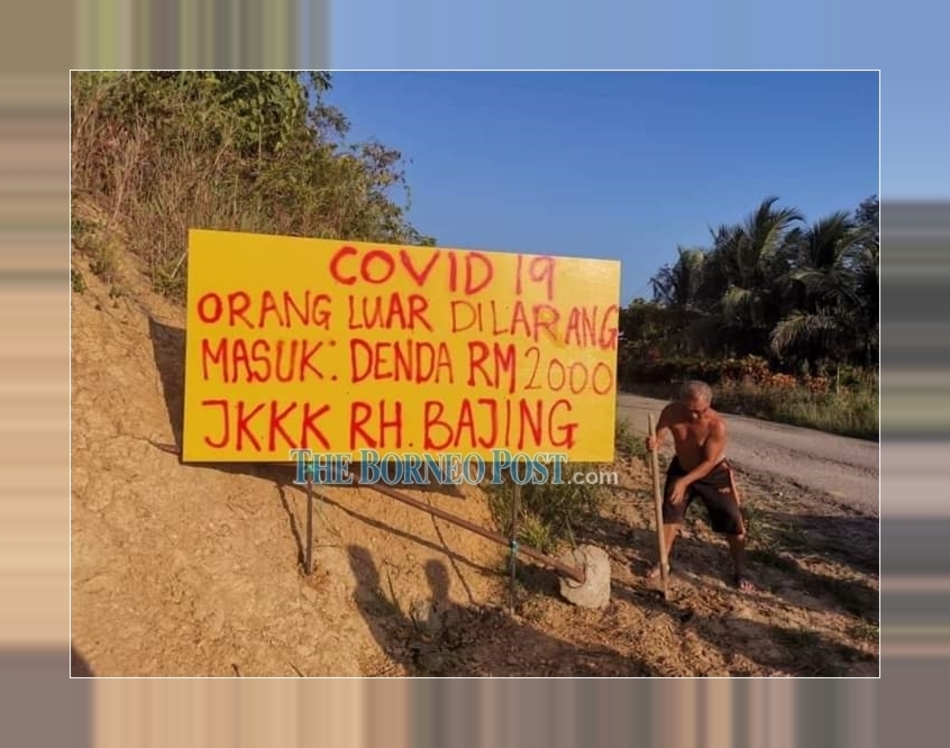 Rumah Bajing residents have put up a sign to deter people from entering the longhouse while the MCO is in effect.

BINTULU: The Village Security and Development Committee (JKKK) of Rumah Bajing, in Batu Niah, Miri is going the extra mile to curb the spread of Covid-19 by imposing a RM2,000 fine for outsiders who visit their longhouse during the Movement Control Order (MCO) period.

Longhouse chief Tuai Rumah Bajing Lingga when contacted said it was part of their own initiative to support the MCO to protect their people in the 51-door longhouse.

“We are not allowing the entry of outsiders, especially from other towns, including salesmen, into our longhouse except for any urgent matters or an emergency situation,” he said.

Bajing, 64, said he had instructed longhouse residents to stay home if there was no urgency for them to go out.

“We are very serious about this because we don’t want this virus to spread and affect our people in the longhouse; we have over 300 people staying here,” he said.

He added that prior to the MCO, the residents had managed to ensure that their food supplies were sufficient during this critical period.

“So far our people have complied with the order and we have also urged other longhouses to do the same to avoid the spread of the virus,” he said.

He said there are over 60 longhouses in the Niah area and complying to the MCO is very crucial to protect their communities.

Bintulu Resident Jack Aman Luat, when asked to comment on the initiative by Rumah Bajing on whether it was allowed to be implemented by other longhouses in Bintulu, said the action taken by the longhouse complimented the MCO.

“Ibans do have what they call ‘adat geliga’ when they organise functions such as Gawai celebrations, weddings and funerals, whereby they imposed a fine or ‘tunggu’ for breach of the adat/custom.

“In this case, I don’t want to say its allowed or not but at the end of the day it is their decision to do so,” he said.

“The RM2,000 fine to me is a deterrent measure to safeguard their community and adhere to the MCO,” he said.

Asked on the level of compliance among members of the public on the MCO today, he said so far the feedback was positive as people were starting to comply with the order.

Jack assured that the police, Bintulu Development Authority enforcement units and other relevant authorities are moving actively on the ground to monitor the situation.

“The Information Department is doing a good job going around the town of Bintulu, Tatau and Sebauh on mobile vehicles announcing the dos and don’ts of the MCO,” he added.

Previous ArticleSMC instructs hawkers at Sibu Central Market to trade on rotation during MCO
Next Article 10,553 from Sri Petaling tabligh gathering have been tested for Covid-19 – Dr Noor Hisham