Sunday, September 20
You are at:Home»Health & Environment»Covid-19 pandemic ‘accelerating’: WHO chief 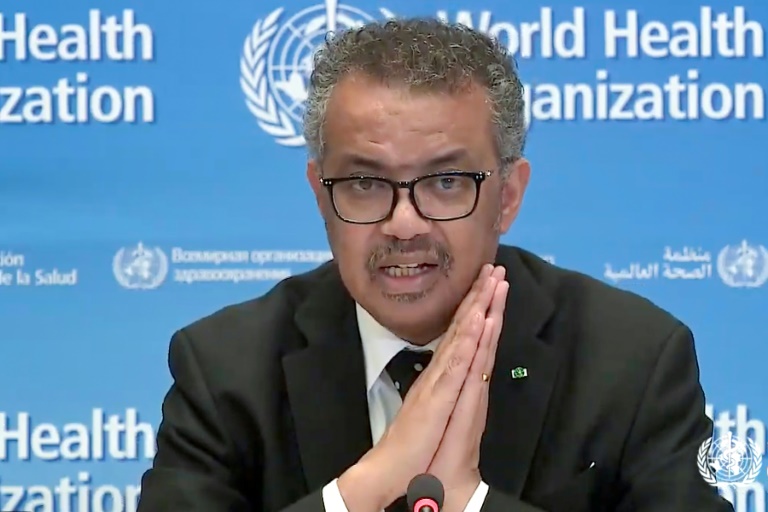 WHO chief Tedros Adhanom Ghebreyesus says the coronavirus pandemic is “accelerating” but its trajectory can still be changed. – AFP photo

The new coronavirus pandemic is clearly “accelerating”, the World Health Organization warned Monday, but said it was still possible to change its trajectory by going on the attack.

The remarks came as the number of deaths soared past 15,000, with more than 341,000 people infected worldwide, according to a tally compiled by AFP from official sources.

He said it took 67 days from the beginning of the outbreak in China in December for the virus to infect the first 100,000 people worldwide.

The number of officially recorded cases is believed to represent only a fraction of the true number of infections, with many countries only testing the most severe cases in need of hospitalisation.

“We are not helpless bystanders. We can change the trajectory of this pandemic,” Tedros said.

“You can’t win a football game only by defending. You have to attack as well,” Tedros said.

Physical distancing could buy time by slowing down the spread, “but they are defensive measures that will not help us to win,” he warned.

“To win, we need to attack the virus with aggressive and targeted tactics,” he said, reiterating a call for “testing every suspected case, isolating and caring for every confirmed case and tracing and quarantining every close contact.”

Tedros and Infantino launched a joint campaign aimed at spreading the message of how to protect against infection so as to “kick out coronavirus”.

In a social media video clip, football stars from around the globe spelled out five simple steps to take on “hands, elbow, face, distance and feel.”

Barcelona and Argentina icon Lionel Messi said: “For your face, avoid touching your eyes, your nose and your mouth. This can prevent the virus from entering your body.”

Despite wanting to go on the attack, the WHO chief acknowledged that a number of countries were struggling to take more aggressive measures due to a lack of resources and access to tests.

Tedros praised the great energy being put into research and development to find a vaccine and of drugs to treat Covid-19.

But he said that “there is currently no treatment that has been proven to be effective against Covid-19,” and warned against the use of drugs not shown to work against the disease.

“Using untested medicines without the right evidence could raise false hope and even do more harm than good,” he said.

Among other things, countries are looking at using antimalarial drugs as a treatment against the new coronavirus.

Tedros said there were “alarming” reports of large numbers of infections among health workers.

Protecting them from the virus should be a top priority because otherwise “many people will die because the health worker who could have saved their lives is sick,” he said.

Tedros said 10 million people had so far signed up to the WHO’s English-language health alert messaging service on WhatsApp, with Arabic, French and Spanish versions coming this week.

He said he would be asking G20 leaders in the coming days to work together better to “fight this pandemic in the strongest terms”.

Meanwhile after Japanese Prime Minister Shinzo Abe said it “may become inevitable” that the Tokyo 2020 Olympics, scheduled from July 24, are postponed, the WHO said it was offering risk advice to the International Olympic Committee (IOC) and the Japanese government.

“I believe a decision will be made very soon regarding the future of the Games,” said WHO emergencies director Michael Ryan.

“We have every confidence that the Japanese government and the IOC will not proceed with any Games should there be dangers to athletes or spectators.” – AFP