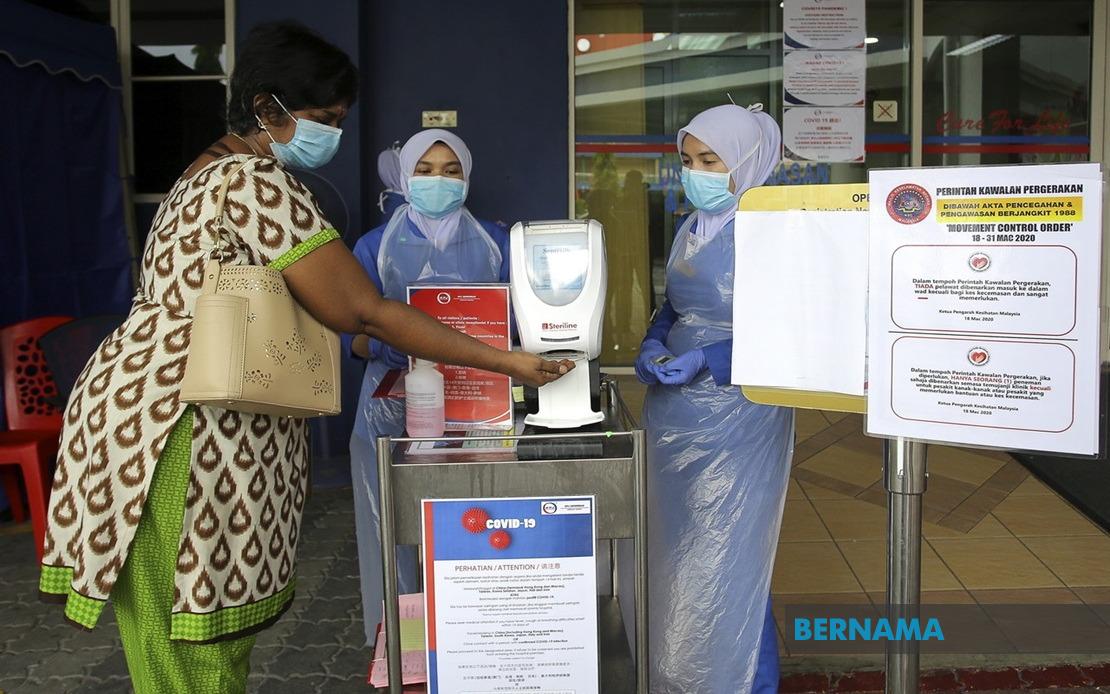 The government will increase its capacity to conduct health screening on a larger scale to curb the spread of the virus in the country. – Bernama photo

PUTRAJAYA: Recognising the possibility of Covid-19 outbreak, which has hit the world today, including Malaysia, likely to worsen, the government will increase its capacity to conduct health screening on a larger scale to curb the spread of the virus in the country.

“The government expects new cases will continue to be recorded in the near future. Therefore, the Ministry of Health has made the preparations. This includes providing 3,585 beds at 34 hospitals nationwide for Covid-19 patients.

“Currently 34 per cent of the hospital bed capacity has been utilised, with the remaining 66 per cent to accommodate more patients.

“In the event of an increase in the number of Covid-19 positive cases beyond the capacity of the hospitals, several places have been identified to serve as temporary isolation and quarantine centres,” he said in a special message broadcast on television at noon.

Muhyiddin said efforts to prevent the spread of Covid-19 to continue until it could be contained by completely severing the entire infection chain.

Emphasising that the movement of the people must remain under control, he said the government’s strategy was to find, screen, isolate and treat Covid-19 patients.

“This strategy will be successful if people are not exposed to this virus through daily interactions.

“Therefore, everyone must be mentally and physically prepared to sit quietly at home for a longer period of time,” he said.

According to the briefing by the Ministry of Health and the National Security Council, the Prime Minister said there was an ongoing upward trend of new Covid-19 positive cases and expected to continue for some time before it began to decline.

Muhyiddin, who announced that the Movement Control Order (MCO) has been extended until April 14 (to combat the spread of the infection), said that Covid-19 outbreak had changed human lives overnight, not only in Malaysia but also worldwide.

The infection of Covid-19 was so rapid that as of today 422,829 people have contracted the virus worldwide with 18,907 deaths.

In Malaysia, as of noon today, the number of positive cases has increased to 1,796 cases, an increase of 172 new cases and death toll has risen to 17 including a doctor.

The current implementation of MCO to run from March 18 to 31, with its enforcement being enhanced on March 22 when Malaysian Armed Forces personnel are deployed to assist the police in ensuring people’s compliance. Thus far, MCO which enters its eighth day has recorded 95 per cent compliance.

Expressing his gratitude to Malaysians for showing a high level of compliance to MCO by staying at home to cut the infection chain, the Prime Minister also said that he believed the people have the ability to adapt to the situation and not be discouraged from moving forward.

“You follow my instruction. You know that this is good for you, your family and the people around you. Your awareness and sincerity in abiding by the rules imposed by the government during this Movement Control Order period is highly commendable,” he said.

Welcoming people’s efforts to adapt to the changes creatively and staying at home for a longer period of time, Muhyiddin also expresses hope that Malaysians will be steadfast and patient.

“Yes, as we often hear, when the going gets tough, only the tough gets going. When things get tough, only the strong will be able to face it,” he said, before concluding his speech by reciting a prayer. – Bernama