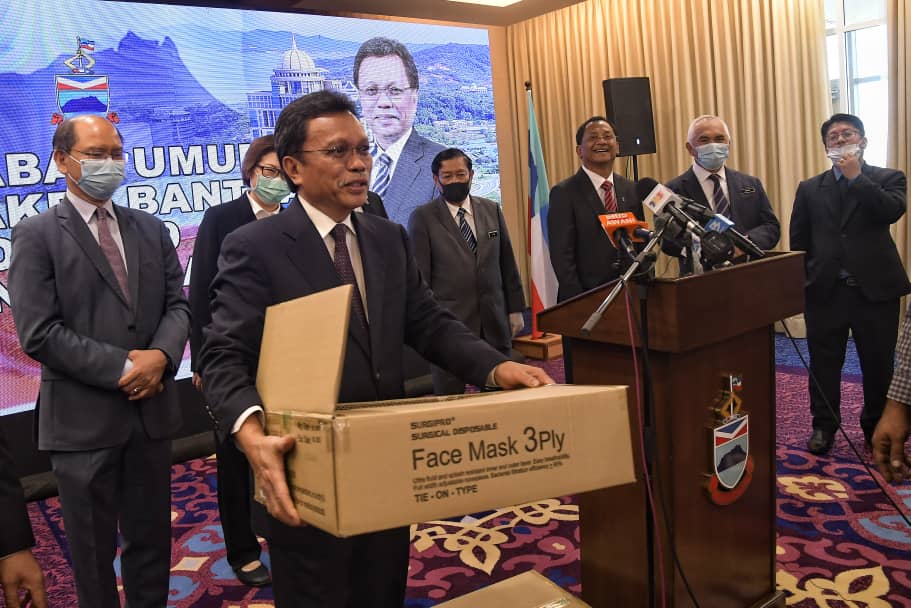 Shafie, carrying a box of face masks at the press conference attended by several Sabah Cabinet ministers, said the State Government had allocated RM50 million to fund all emergency expenditure related to Covid-19, including the provision of face masks, hand sanitizer and protective garments.

KOTA KINABALU: The Sabah Government will be implementing 15 measures under its Sabah Covid-19 Assistance Package worth RM670 million.

Chief Minister Datuk Seri Panglima Mohd Shafie Apdal said this yesterday when announcing the stimulus package which is aimed at reducing the burden and difficulties of the community due to the Covid-19.

The steps are categorized under three groups that focus on frontliners, the people at large and industries in Sabah.

He said that the State Government had allocated RM50 million to fund all emergency expenditure related to Covid-19.

Under this endeavor, the State Government will ensure the frontliners consisting of doctors, nurses, health services staff and immigration have the necessary equipment that are critical as they go about their duties.

These consist of face masks, hand sanitizer and protective garments.

“This is important to ensure the Covid-19 pandemic is controlled and curbed more effectively,” he said.

Shafie also said that RM10 million would be allocated for food assistance and other needs of those working as frontliners.

“The Sabah Government is touched by the commitment of our frontliners who continue to work and implement the measures taken by the government to stop the spread of the Covid-19,” he said.

With regard to the assistance to the affected members of the community, Shafie said that RM20 million had been allocated to these groups of people.

He said that this funding was inclusive of RM18 million to help provide food to villages in Sabah that are affected.

Meanwhile, RM2 million will be used to help and reduce the financial burden to sustain their daily needs, including the provision of food for students in Sabah and in Peninsular Malaysia following the Movement Control Order (MCO) which took effect from March 18.

At the same time, the Sabah government is also allocating another RM20 million as special assistance allowance to the poor and hardcore poor.

He also announced that RM80 million had been set aside to help the low-income group or B40 group as well as other groups that are affected.

The fund is targeted at Sabahans working in Peninsular Malaysia numbering about 30,000 people.

The fund is also targeted at taxi drivers numbering 13,132 people; farmers, fishermen and breeders numbering 169,630 people; mountain porters numbering 339 people; as well as the vulnerable group consisting of the elderly, orphans and people with disability (62,638 people); and single mothers (6,500 people) throughout Sabah.

In addition, Shafie also announced a 30 percent discount on Quit Rent for this year, which is expected to benefit 232,774 individuals; 9,184 companies; and 402 in various other categories.

He said that those who had paid the Quit Rent this year can get a rebate next year.

He said house assessments would also be reduced by 20 percent this year, a move which benefits 97,641 taxpayers in Kota Kinabalu and 221,470 at other local governments.

Again, those who have settled their house assessments will be able to get a rebate next year.

“Hawkers will also be exempted from paying their hawkers’ licence this year, he said. There are 26,227 hawkers throughout Sabah.

The State Government has also agreed to exempt the payment of all domestic water bills for the period of three months starting April, this year.

He said a discount of 30 percent would also be given to electricity bills for a period of three months starting next month.

The discounts shall involve a State fund of RM11.5 million per month or RM35.65 million for three months.

He said the move would benefit 512,000 users or 98 percent of electricity users throughout Sabah and Labuan.

Those living at houses under the People’s Housing Programme (PPR) will also be exempted from paying rental for a period of six months starting next month.

The exemption will incur a cost of about RM21.1 million to the State Government.

Shafie also said that due to the change of government at the federal level, the monthly allowance payment to Village Community Management Committee or MPKK has been affected in Sabah.

“The State government has decided to adopt a proactive step to ensure all MPKKs continue to receive their allowance,” he said.

A total of RM30 million in fund had been allocated for the payment of the allowances for a period of 10 months, including the month of March, he said.

He also announced that all daily waged earners appointed by the Sabah Government and unable to work during the MCO would also receive salaries.

And to strengthen businesses and improve the quality infrastructure and basic rural amenities, the Chief Minister also made the following announcements.

Shafie said that an allocation of RM40 million had been prepared for the Micro Credit Scheme for small business owners/operators.

He said that the micro credit funding comes with a low interest rate of two percent and is prepared by the Sabah Credit Corporation.

The funding is expected to help around 20,000 small business operators/owners throughout Sabah.

Another allocation of RM200 million is to improve rural infrastructure and basic amenities.

A RM50 million funding for Small and Medium Industries in Sabah (Sabah SME Fund) which offers loans with interest rate as low as 3.5 percent.

Shafie said since the government had decided to render its assistance, he hoped SMEs in Sabah would look after the welfare of their staff during this challenging period.