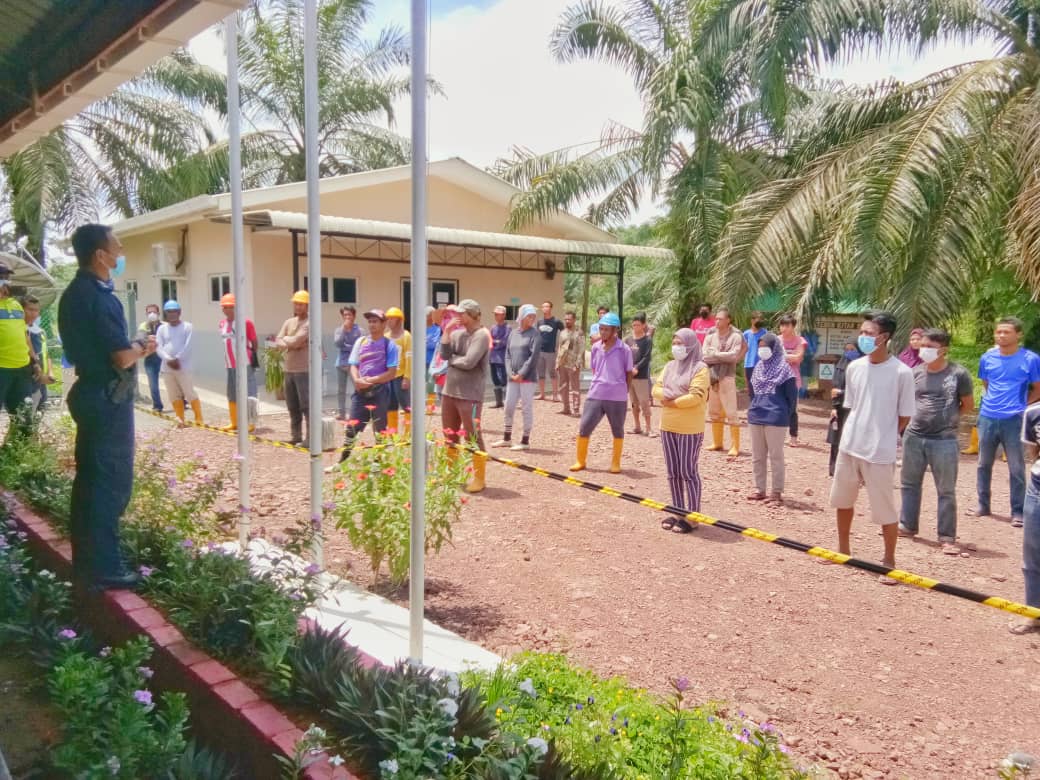 ACP Nasri speaking to plantation workers in Jalan Segama who were found to be still working.

LAHAD DATU: The police here have urged the management of oil palm plantations, especially in this district to cease operations and comply with the Movement Control Order (MCO).

District Police Chief, ACP Nasri Mansor said that in line with the order from the government, the plantations here must be shut down from March 25 to 31 while the palm oil factories were ordered to cease operations from March 27 to 31.

Nasri said the decision was made to control the movement of plantation workers as there are workers from the plantation in Tawau, Lahad Datu and Kinabatangan who tested positive for Covid-19.

“Today (Thursday) we inspected a plantation in Jalan Segama and found that the plantation was still operating and did not comply with the MCO.

“Some 25 workers, including 18 men aged between 20 and 47, were later briefed and given warning to comply with the MCO.

“We have also called their plantation managers and advised as well as warned them to cease the operations as well as comply with the MCO,” he said, when met after inspecting one of the plantations in the district.

Nasri said inspection and monitoring would be carried out by police and action would be taken against the companies or those who failed to comply with the MCO.

He said action would be taken against those who failed to comply under Section 22(b) of Prevention and Control of Infectious Diseases Act 1988 (Act 342) and Section 186 of the Penal Code.

Meanwhile, police here detained a man who escaped from the police roadblock in Kinabatangan on Tuesday.

Nasri said the Kinabatangan police provided information on the driver of a Proton Exora that escaped from police. The vehicle was later stopped at a roadblock in Jalan Tamoi.

“Inspection on the car found a 40-year-old man with his wife and their two children. Further inspection also found that the vehicle used a fake registration number.

“Police later found that the regustration number belonged to a Proton Perdana registered under the suspect’s name,” he said.

Nasri said investigation was carried out under Section 108 (3)(f) of Road Transport Act 1987.

He added the suspect as well as the seizure were later handed to Kinabatangan Police headquarters for further investigation under Section 26 of Police Act,” he said.