Wednesday, April 8
You are at:Home»News»Sabah»MCO: Two jailed, fined in Sabah for obstructing cops 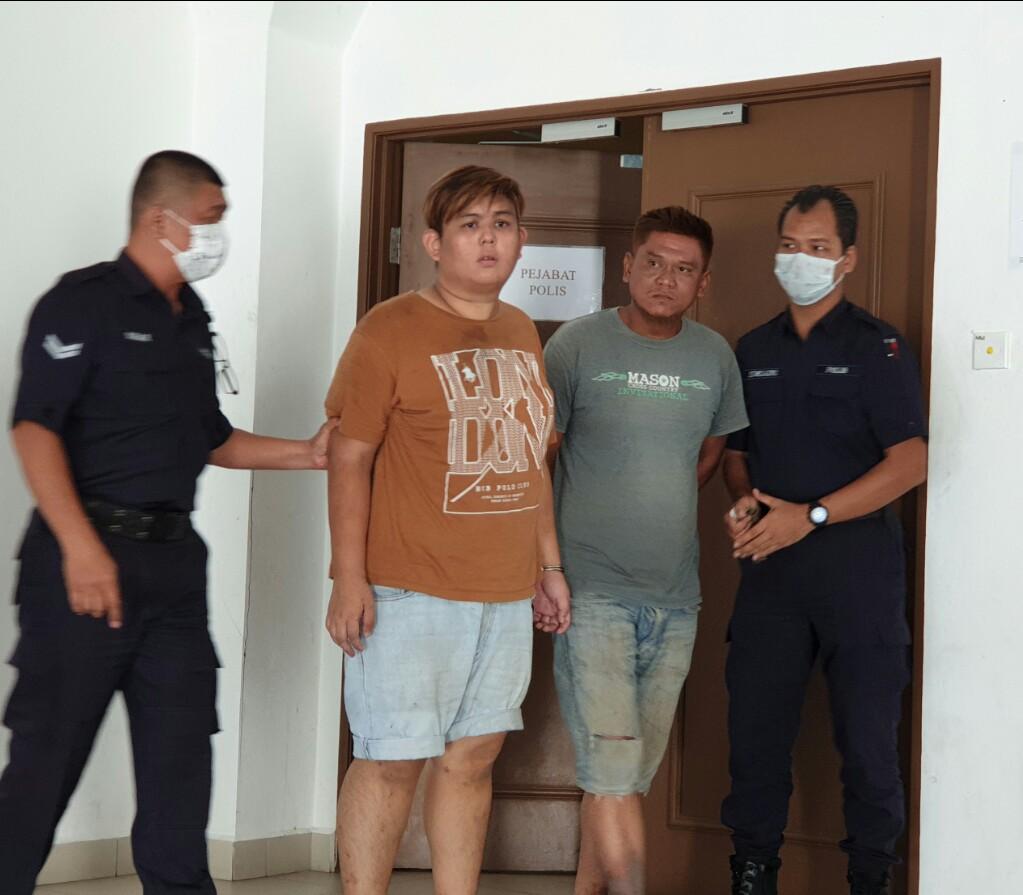 Yong (second left) and Injimar (second right) after they were sentenced yesterday.

Yong Tze Hou and Injimar Abu Gafar were sentenced to 10 months in jail and RM6,000, in default, 10 months in jail respectively after they pleaded guilty before magistrate Stephanie Sherron Abbie to their charges under Section 186 of the Penal Code.

The indictment provides for a jail term of up to two years or a fine or both, upon conviction.

For the first case, the 26-year-old Yong was arrested between Jalan Kampung Cenderakasih and Jalan Bukit Bendera on March 25.

The facts of the case stated that at about 1.30am on the day of the incident, a mobile police station van saw a car driven by the accused in a suspicious manner.

The police van approached the car after which but the accused fled immediately.

The police personnel for Ops Payung Luyang chased after the accused, and at the same time they informed personnel from Kota Kinabalu operation room and requested assistance.

Soon after eight vehicles joined the police van to chase after the accused.

The police personnel pursuing the accused told him to stop his car but he just ignored the instruction.

The police overtook the accused’s car and saw a woman in the front passenger seat whom they believed was holding a baby.

The chase lasted about an hour after the accused’s car ran out of fuel.

Investigation revealed that both the accused and the woman were friends and that the accused was sending the woman to her husband’s family house to inform family members that her husband was not returning home.

Her husband was allegedly arrested for not having any valid travel document.

The investigation further showed that when the van approached the accused’s car, the accused became panic which caused him to speed off to flee.

A check was conducted on the ownership of the car which was registered under the name of the accused’s family member.

In pleading for a lenient sentence, the accused requested a fine and apologized to the police and public for acting silly that day without thinking twice of his action.

In reply, the prosecution pressed for a deterrent sentence on the grounds that the accused had taken unnecessary risk by doing what he had done which endangered the life of his passenger, a baby and himself.

The prosecution explained that the police was forced to take risk under so many heath presumption for example somebody with Covid-19 was moving from one place to another point that might further spread the disease.

The prosecution added that the accused was lucky that the police did not use force against him.

However, an unnecessary manpower had been utilised just to chase him.

Meanwhile for the second case, Injimar, 33, was apprehended at Mile 7, Jalan Tuaran on March 23.

The facts of the case stated that when the police were doing their duties, Injimar did not cooperate and he had no diving licence for which a traffic summons was issued against him.

There was a passenger inside his car when he was asked to come out of the car for allegedly driving without any valid travel document.

The accused became angry after the passenger was asked to come out which prompted te accused to confront the police and uttered harsh words while punching the bonnet.

In mitigation, Injimar pleaded for a lenient sentence and claimed that he got angry that day because his wife had asked him to buy some dishes but ended up being rude when police conducted a check on him.

In reply, the prosecution urged the court to impose a deterrent sentence against the accused and submitted that the accused could have avoided all the problems if he had complied with police instructions.

The prosecution also said that under the current situation, the public must abide by the authorities instructions.

The court also ordered Injimar to be referred to the Immigration Department for further action.