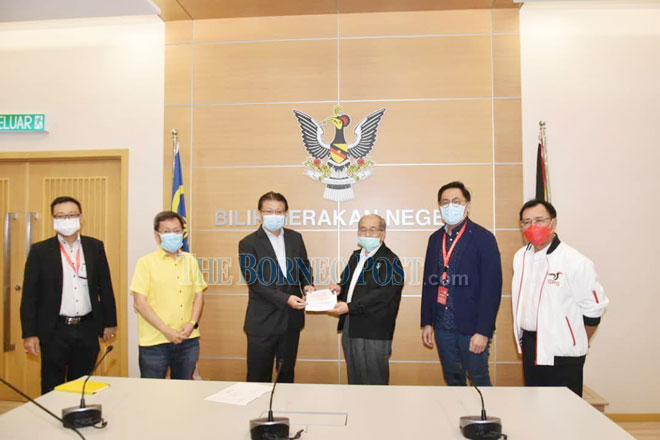 Ngui (third left) hands over the cheque to Uggah (third right) as others look on.

The cash contributions from Sheda comprised RM65,000 from the headquarters, RM20,000 from its Kuching branch, and RM5,000 respectively from Sibu, Bintulu and Miri branches.

Ngui said Sheda salutes the multi-pronged initiatives of the Sarawak government in fighting against this pandemic in the spirit of ‘Jaga bena-bena Sarawak tok’ (Taking good care of Sarawak).

He also explained the cash contributions, which was Sheda’s corporate social responsibility initiative, was specially to help the front liners, in specific the Sarawak medical teams as they battle the spread and fight against the Covid-19.

On behalf of Sheda, he hoped this goodwill gesture will also boost the spirit of the front liners and reinforce the people’s appreciation and acknowledgement of their commitment, dedications and contributions.