Tuesday, February 7
You are at:Home»News»Sabah»166,000 face masks arrive from China
For the freshest news, join The Borneo Post's Telegram Channel and The Borneo Post on Newswav. 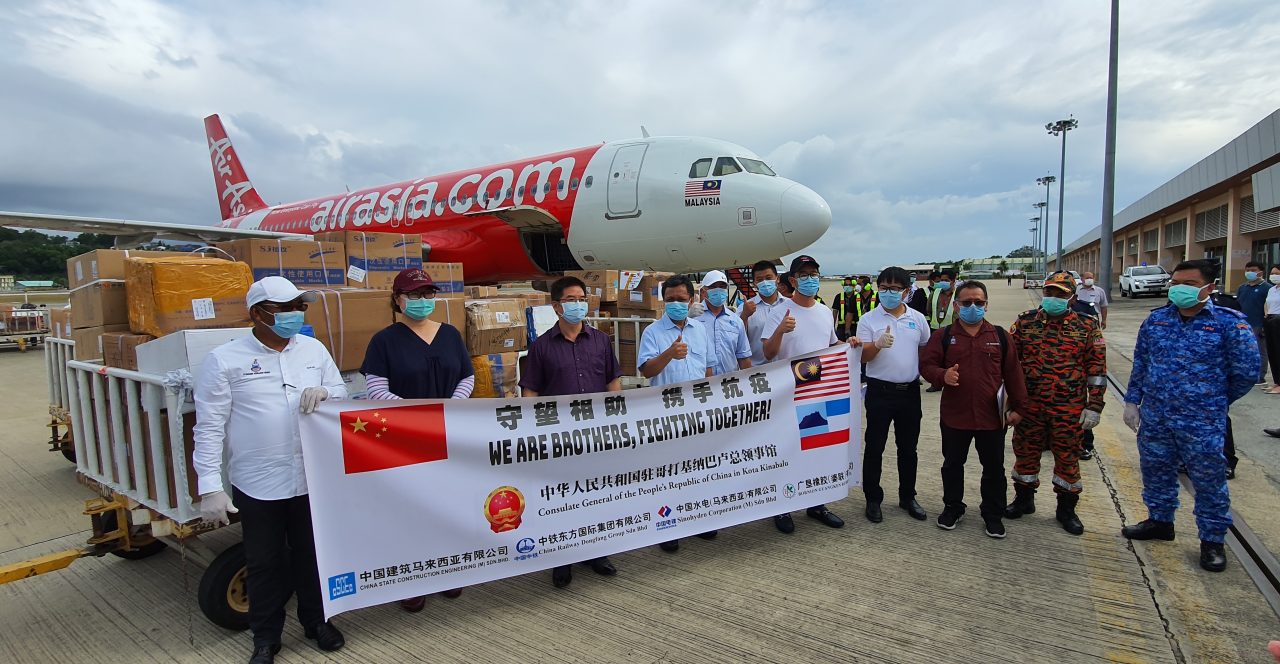 From left: Safar, Liew, Liang, Shafie, Yusof, Wong (seventh left) and others in a photo next to the boxes of face masks donated by the Consulate General of the People’s Republic of China in Kota Kinabalu and four Chinese enterprises.

KOTA KINABALU: Some 166,000 face masks donated by the Consulate General of the People’s Republic of China in Kota Kinabalu and Chinese enterprises to the State Government had arrived at the state capital via charter flight from Guangzhou, China yesterday.

On behalf of the State Government, Shafie thanked the Consulate General of the People’s Republic of China in Kota Kinabalu and the Chinese Government for not only assisting Sabah in terms of the protective equipment, but will also be sending several experts on the novel coronavirus (Covid-19) soon.

He said the contributions reflected the close cooperation between the State Government and the Chinese consulate general.

Shafie added that Foreign Minister Datuk Seri Hishammuddin Tun Hussein had given the green light on the medical expertise from China to guide and train local healthcare workers in overcoming the pandemic.

He said the Chinese experts would be placed in Universiti Malaysia Sabah (UMS) where they have access to laboratory.

“I am aware that Mr Liang had also gone out of his way to expedite the process of getting the charter flight from Guangzhou to Sabah in a short period of time.

“Without his intervention, it would otherwise be a long process.”

Liew, who is also the Minister of Tourism, Culture and Environment, expressed her deep gratitude to the people of China for their care and support during this difficult time of the Covid-19 pandemic.

“Rest assured, the State Government will make full use of these medical supplies for the benefit of the Sabah people,” she said.

Meanwhile, Liang said the State Government and people of Sabah have rendered precious support to China during its most difficult time during the Covid-19 outbreak.

“To thank the people who once helped us, the Consulate General in Kota Kinabalu has immediately taken action to purchase face masks and protective equipment when the Covid-19 pandemic has spread to Sabah,” he said.

Liang said the consulate only handed over face masks yesterday while other protective equipment such as surgical masks, hand sanitizers and protective garments would be delivered in the next batch.

“The consulate has also communicated with different local governments of China to join our effort.

“I am sure more resources will be delivered to Sabah soon.”

He said the consulate was also facilitating Sabah organizations to source protective equipment from China.

“I hope these resources will help Sabah’s battle against Covid-19, and convey China’s appreciation to the State Government and the people of Sabah in giving us courage and strength to fight the pandemic.”

Liang also said that a large consignment of protective equipment and medical supplies donated by the Chinese Government to Malaysia had arrived in Kuala Lumpur.

In addition, he said the Chinese Government had decided to send a medical team to Malaysia upon our country’s request to share their experience of the Covid-19 pandemic.

Furthermore, he said Malaysian and Chinese experts have weekly video conferencing to discuss the pandemic and he hoped that Sabah would join in the meeting as well.