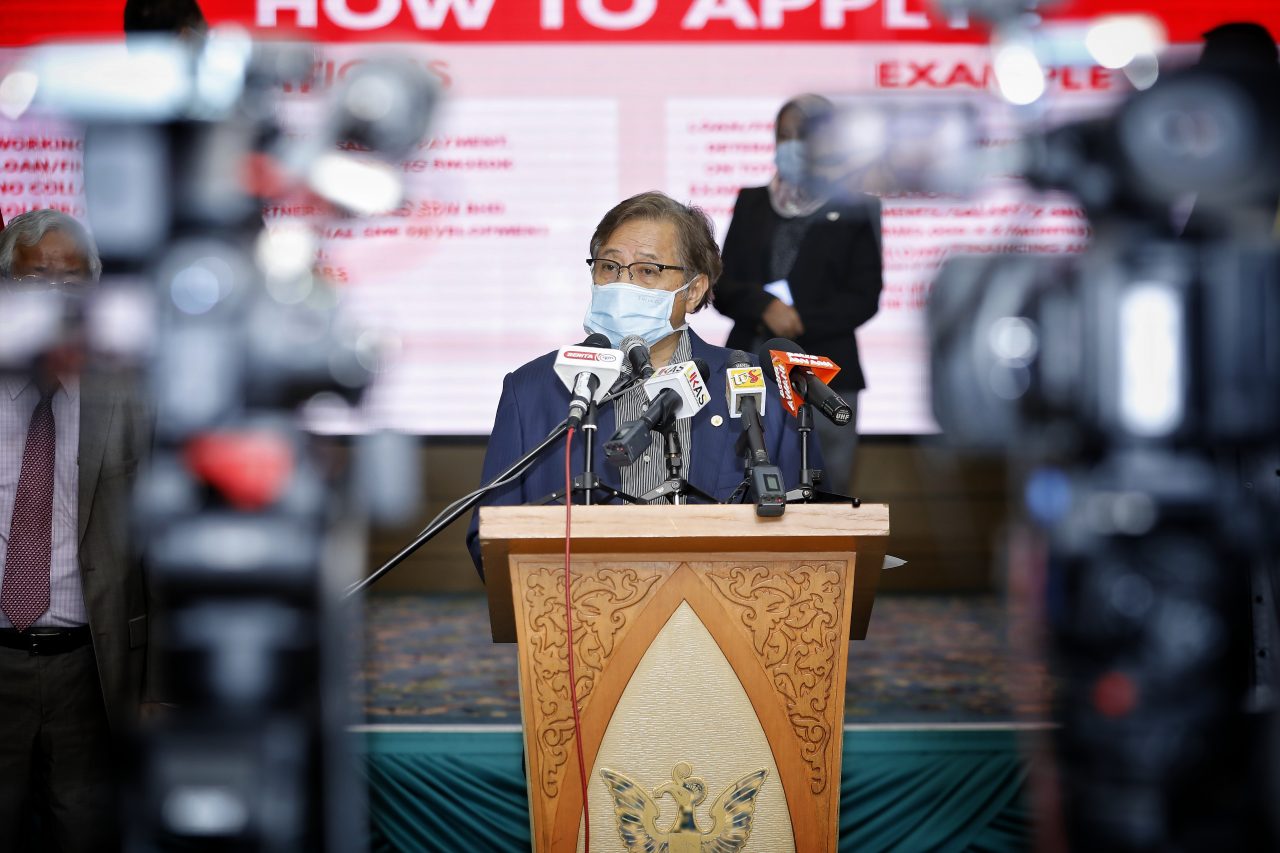 Abang Johari speaking during the press conference where he announced the Bantuan Khas Sarawakku Sayang aid package. – Photo by Chimon Upon

Chief Minister Datuk Patinggi Abang Johari Tun Openg said the state government, in collaboration with Maybank, Hong Leong Bank, RHB Bank as well as the Special Relief Fund (SRF) under the Bank Negara Malaysia (BNM), had agreed to absorb the interest costs due to be released to SMEs in the state.

“The interest free loans of RM1 billion will be made available for our SMEs. The financial implication for the interest rates subsidy over the three and a half years is RM80.7 million.

“The scheme will benefit more than 40,000 SMEs throughout Sarawak,” he announced this during a press conference held at Wisma Bapa Malaysia in Petra Jaya here today.

Abang Johari said SMEs needed to apply for the loans directly from any branches of either Maybank, Hong Leong Bank or RHB Bank.

He said all SMEs have an option to apply for either Islamic or conventional loan for the scheme.

The conditions were listed as working capital in respect to salary payment; interest free loan amount from RM20,000 to RM500,000; no collateral required; sole proprietorship, partnership and Sdn Bhd; and businesses in operations three years and more.

“For SMEs in operation for less than three years, they can still opt to apply for the RM50 million Micro Credit Scheme through the Ministry of International Trade and Industry, Industrial Terminal and Enterpreneur Development Sarawak (Mintred), which I have announced in the first BKSS on March 23,” he said.

Abang Johari said the loan amount “is to be based on total staff salary for six months”.

The Sarawak government is also offering a Special BKSS Grant amounting to RM1,500 per entrepreneur for each hawker and petty trader registered with the local authorities, he announced.

“This will benefit more than 65,000 petty traders and hawkers throughout Sarawak. The grant will be paid out to the respective qualified entrepreneurs through Sarawak Pay account in two tranches.

“The overall cost of the grants to be borne by Sarawak government is RM98.4 million,” he said.

To ease the financial burden of Micro Enterprises, he said the government will facilitate the sector in deriving the full benefits from all the assistance that had been announced.

“Among the measures is to zero-ise the two per cent interest rate for three and a half years under existing Micro Credit Scheme by Mintred.

“The Micro Credit Scheme is operated by Agro Bank Berhad and Sarawak Economic Development Corporation (SEDC) with a maximum loan size of RM50,000 at zero per cent interest rate for each enterprise.

“I hope our entrepreneurs would take opportunity of this scheme to apply through SEDC and Agrobank counters. A total fund size made available for this measure, amounting to RM50 million, will cost the Sarawak government RM3 million,” he explained.

Abang Johari said the BKSS 2.0 would inject a total of RM1.1 billion of liquidity into Sarawak’s economy and help drive domestic business activities.

He added that this involved the expenditure by Sarawak government amounting to RM182.12 million.

“I wish to stress here that it is not necessary for the Sarawak government to table an Additional Supply Bill for all the aid packages that have been announced.

“This is because the funds are already made available via the Contingency Fund as approved by the DUN in the 2020 Budget,” he said.

Abang Johari pledged that the Sarawak government will continue to be transparent in its spending and all actions taken are based on the provisions of the law.

“The Sarawak government will continue a prudent financial practice and good fiscal discipline to ensure that the state’s financial position remains strong and manageable,” he added.