Saturday, January 22
You are at:Home»News»Nation»Compound for violating MCO remains at RM1,000 – Ismail Sabri 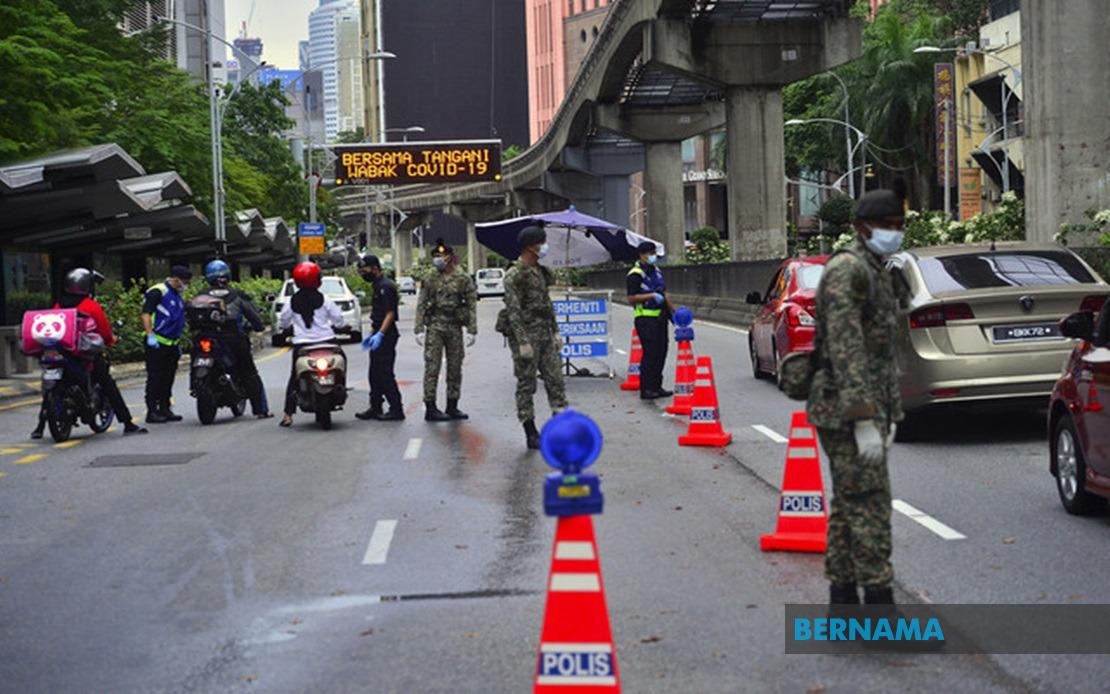 Police conducting a road block at a location in Kuala Lumpur. – Bernama photo

He said that, so far, the Prevention and Control of Infectious Diseases Act 1988 was still in force for such offences and that it had to be amended in Parliament for the amount to be increased.

“It’s true that many are wondering why the amount is lower compared to that in other countries. We have discussed it. But the Act is clear and the rules are clear, that the penalty is RM1,000. If it needs to be changed, it must be raised in Parliament.

“Police too have a choice. Whether to issue a compound or take the offenders to court. So, the prison sentence and so on are decided by the court,” he said after chairing the Special Ministerial Committee on MCO meeting today.

Ismail Sabri said the Royal Malaysia Police (PDRM) arrested 1,220 people for not complying with the MCO yesterday and 854 were issued the RM1,000 compound fines.

A total of 345 people were remanded while another 21 were put on police bail.

“A total of 2,156 compounds have been issued, with the total cumulative arrests of those who violated the MCO from March 18 to April 11 being 8,125 individuals,” he said.

He also said that as of yesterday, PDRM and the Malaysian Armed Forces (MAF) had conducted checks on 435,361 vehicles at 783 road blocks nationwide.

He explained that 48,123 spot checks were also carried out nationwide, with 6,158 premises inspected.

Meanwhile, Ismail Sabri reiterated that compulsory quarantine would definitely be implemented on all Malaysians entering the country through international entry points via land, sea and air throughout the country.

“Quarantine centres have been set up at all international entry points and they will be screened before undergoing compulsory quarantine,” he said.

He explained that as of yesterday, a total of 163 quarantine centres were operational compared to 156 on Friday and that 12,359 individuals were now in compulsory quarantine.

He said a total of 835 Malaysians returned home yesterday and were put under compulsory quarantine.

Meanwhile, Ismail Sabri said the Housing and Local Government Ministry had carried out 1,413 COVID-19 general sanitation operations in 89 zones, including in 25 red zones, since March 30.

He said that among the areas disinfected were 987 government buildings, 602 public places, 599 business premises and 115 supermarkets.

“Yesterday, a total of 122 sanitation operations were carried out, covering 51 zones in 13 states, including 38 areas in Johor and 23 in Pahang. Government buildings (103), public places (37), business premises (71) and supermarkets (eight) were disinfected.

“A People’s Housing Project (PPR) and 17 common areas of low and medium low cost strata schemes in Selangor’s red zones were also disinfected, thus a total of 38 PPRs, comprising 37,686 units, have been disinfected,” he said. – Bernama