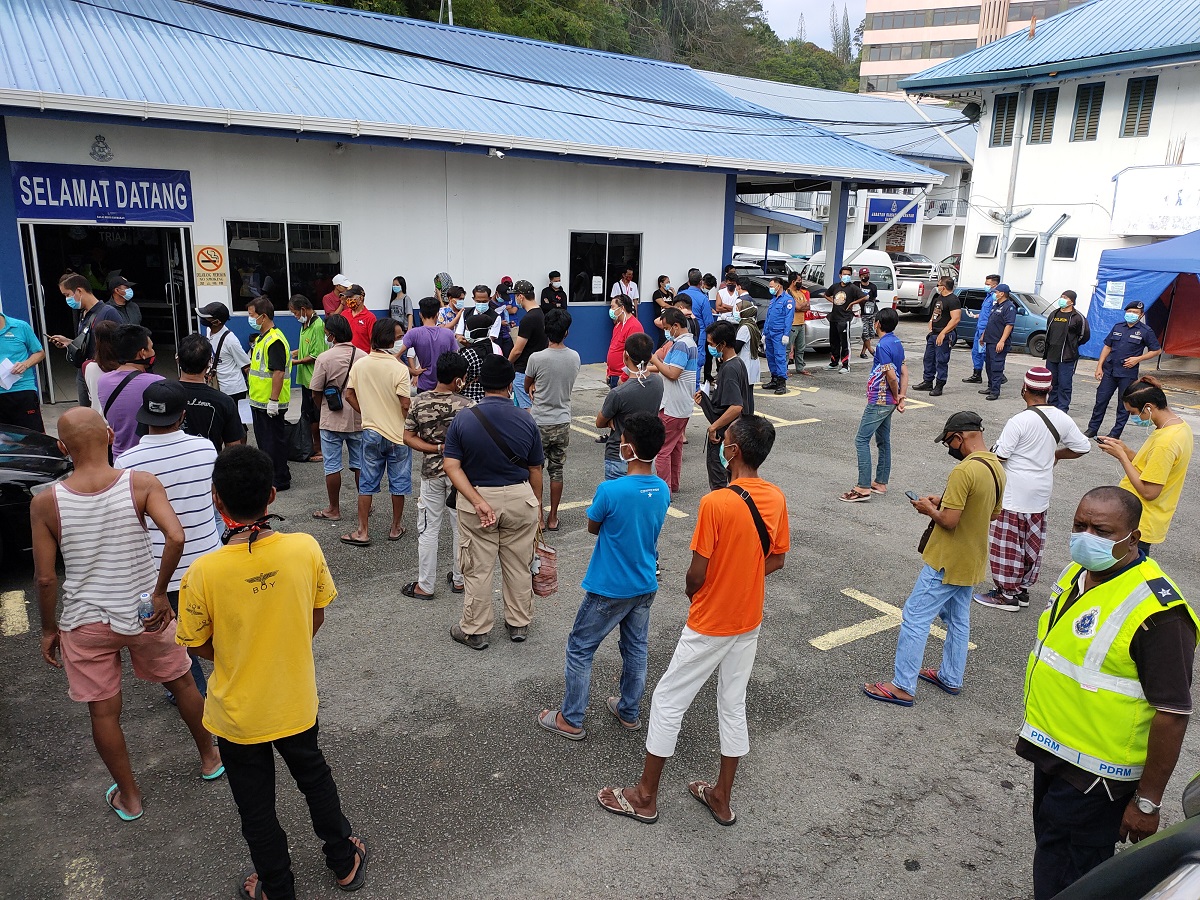 The 55 people who were detained for defying the Movement Control Order at Sandakan Police Station.

KOTA KINABALU: More than 100 people were detained by police here and in Sandakan on the first day of the third phase of Movement Control Order (MCO).

Fifty-two people were detained by police here, and most of them at roadblocks around the state capital while a number of them were detained by mobile patrol police, said Kota Kinabalu police chief ACP Habibi Majinji.

“During phase one and phase two of MCO, police only advised the public to stay home and limit their movement outside.

“But in phase three of the MCO, we will take an aggressive approach by detaining anyone violating the order, which is detaining and charging them in court,” he said when met at a roadblock at Jalan Kepayan yesterday.

Habibi said that during the phase three the police would thoroughly check all vehicles at their roadblocks.
“This approach is taken to ensure the public will not simply go out amd move freely withour any reason.

“If they are unable to give any valid reason to be out on the streets, we will detain them for investigation,” he said, adding they could be charged under the Police Act and the Prevention and Control of Infectious Diseases Act 1988.

To date, a total of 104 people have been detained by police in the state capital for violating MCO when it was first implemented on March 18.

Meanwhile, Habibi said the police were monitoring the personal ‘cash on delivery’ services during the MCO period.

Habibi said there had been several complaints regarding the personal ‘cash on delivery’ services which turned out to be an excuse for those involved to go out and to avoid being detained by the police.

“At several roadblocks, they would tell police that there are delivering food that have been ordered but upon a thorough inspection, we found that there was no such order for food.

In Sandakan, police detained 55 people who were seen wandering around town without any valid reasons from 3pm to 4.30pm during an integrated Covid-19 operation, yesterday.

Sandakan District Police Chief ACP Mohd Azhar Hamin, who led the operation, revealed that out of the 55 people, 38 were Malaysians and the rest were foreigners.

“The detainees will be handled by Crime Investigation Department at Sandakan Police Station in town to investigate whether they had valid reasons to be wandering around town during Movement Control Order (MCO) period.

“We will investigate if they are really looking to buy daily necessities, or they are just going out to wander around. If the excuse given is not acceptable, then action will be taken against them (they will be charged in court),” he said.

Out of the 55 detainees, seven are women.

A total of 54 personnel from four enforcement agencies were involved in the operation here, including the police, Sandakan Municipal Council (SMC), Health Department, and Civil Defence Force.

Azhar urged the public to obey the MCO so that the infection chain of Covid-19 could be broken.

Such operation would be conducted continuously until the end of MCO, he told a press conference held at Sandakan police station after the Covid-19 operation.

Meanwhile, a photo of a blocked road in Jalan Cecily that had its barricade removed was shared in social media.

On this, Azhar urged all not to pass through that road because the police had done so in the interest of the the public.

“People who removed the barricade are selfish and had done so for own interest. The police have blocked the road for the good of the community.

“We understand that instructions following MCO could be very complicated, especially in terms of movement. However, we do not intend to make things complicated for the people, we are only doing this for their benefit.

“Hence, let’s work together and break the infection chain of Covid-19,” he said.

Azhar said stern action would be taken against individuals who were caught removing police barricade at closed roads here.

Meanwhile, SMC President, Wong Foo Tin said that those found wandering around outside without valid reasons would be detained immediately and be charged in court without any compromise.

“There will be no compromise. Those who are sitting at the roadside to chat, those who are wandering without purpose will be detained and charged in court. People are reminded to stay at home,” he said.