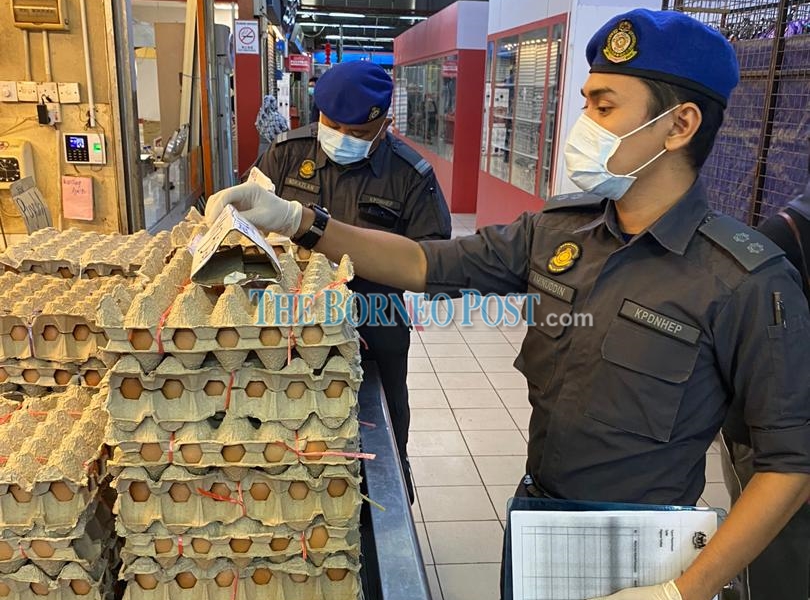 A KPDNHEP enforcement officer is inspecting one of the business premises.

KUCHING: The Ministry of Domestic Trade and Consumer Affairs (KPDNHEP) Sarawak has yet to enforce the Movement Control Order (MCO) Maximum Price Scheme.

According to a statement from KPDNHEP Sarawak today, the scheme was still being studied by the ministry’s top management in Putrajaya.

“Daily inspections are done to ensure the necessities as well as food and drinks are sold with reasonable prices during MCO. Inspections are also made to ensure traders do not take advantage by raising the prices,” it said.

He said the scheme would ensure control over the prices of 12 daily essentials such as chicken, chicken eggs, cooking oil, wheat flour and kembong fish.

“The details of the scheme will be announced by KPDNHEP,” he said.

Meanwhile, KPDNHEP Sarawak had inspected 4,495 premises covering urban and rural areas during the MCO between March 18 and April 19.

As of April 19, 22 cases were being investigated with a total of RM2,451 worth of goods seized and RM1,650 in compounds under various offences were issued.

“Out of the 22 cases, nine were investigated under the Price Control and Anti-Profiteering Act 2011; seven cases under the Weights and Measures Act 1972 , Consumer Protection Act 1999 (two cases) and the Control of Supplies Act 1961 (four cases),” it said.

“Traders who are found to raise the prices above the profit margin, the ministry will take stern action under Section 14 of the Price Control and Anti-Profiteering Act 2011.

“The Individuals, if convicted can be fined up to RM100,000 or jailed for not more than three years or both. For companies or organisations, they will be fined up to RM500,000 if found guilty,” it said.

They can also visit any of the ministry’s nearest office for actions to be taken.