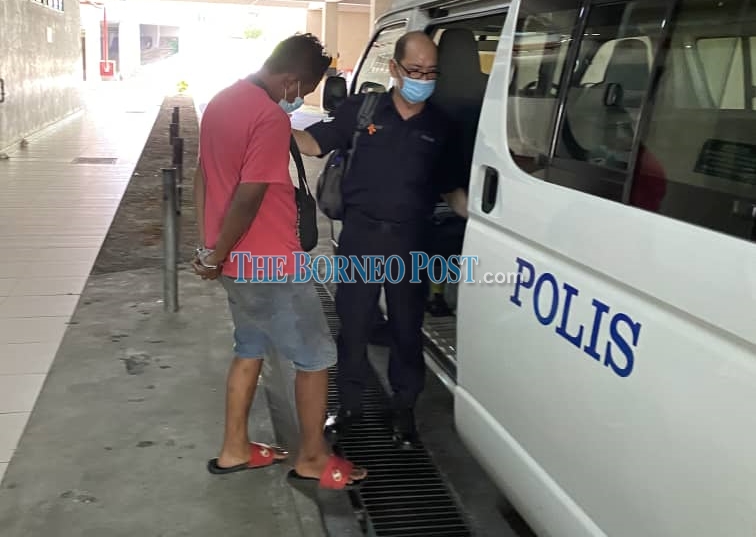 Affandi being escorted into a police van after failing to pay the fine.

KUCHING: A 28-year-old man has been fined a total of RM1,700 by the Magistrate’s Court here today for violating the Movement Control Order (MCO) and obstructing a civil servant from carrying out his duty.

Affandin Jol @ Julaihi was ordered to pay a fine of RM700 or a seven-day jail term in default for violating MCO by Magistrate Sandy Yvette Freddy today.

“The accused is also fined for another RM1,000 or two months imprisonment in default under Section 186 of the Penal Code for obstructing a civil servant from carrying out his duty,” said Sandy.

The accused pleaded guilty to both charges when they were read out to him.

According to the fact of the case, the accused was charged with obstructing a police personnel from carrying out his duty during a roadblock at Jalan Sultan Tengah, here.

Upon inspection, Affandin tried to escape and the police had to use minimum force to arrest the accused.

On the same day, the accused failed to provide a reasonable reason when venturing out of his home at Kampung Rampangi and headed to Jalan Sultan Tengah areas, an identified hotspot for Covid-19. The excuse given by the accused was he wanted to buy cigarettes.

As a result, Affandin was charged under Regulation 3 (1) of the Prevention and Control Infectious Diseases (Measures within the Infected Local Areas) Regulations 2020.

Also at the same court were 21 individuals who pleaded guilty for violating MCO and all of them were fined between RM600 and RM800.

Deputy public prosecutor Ruthra Raj prosecuted while all of the accused were not represented.