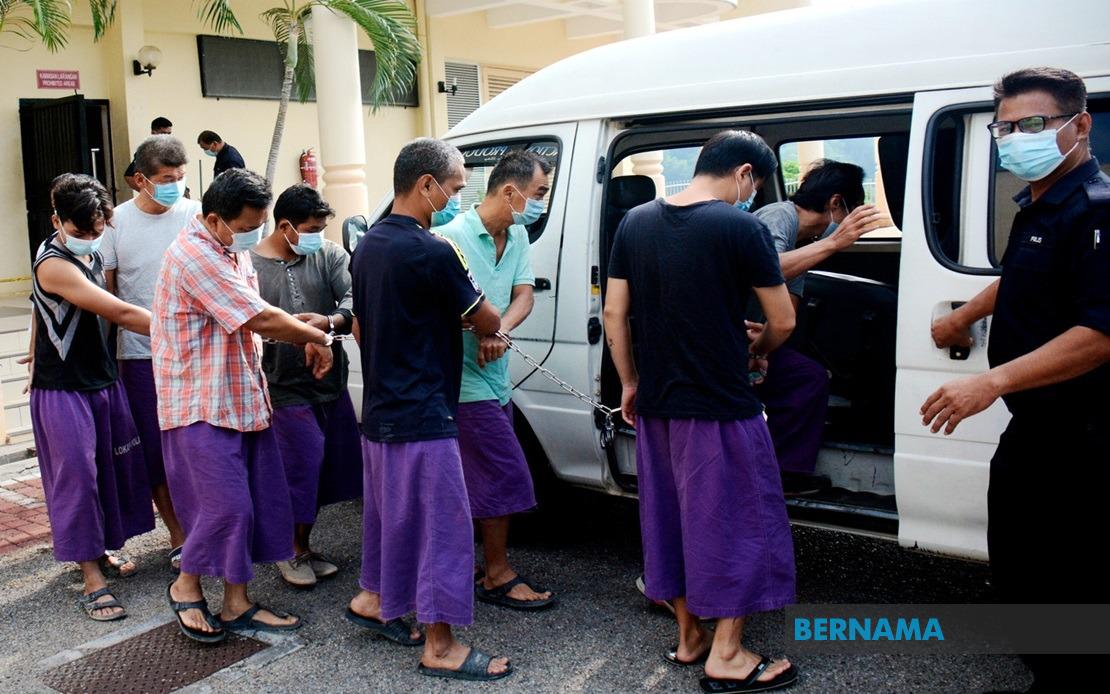 MCO violators are led away by the police. Bernama Photo

KUALA LUMPUR: A total of 185 individuals were charged in several states today for violating the Movement Control Order (MCO).

In PAHANG, 14 individuals were charged in the Raub Magistrate’s Court, with six of them including a foreigner fined RM700 in default 14 days’ jail for mining gold at the Kekal Tersang Forest Reserve in Batu Talam on April 16.

Another eight aged between 32 and 52 were fined RM600 in default 10 days’ jail each for opening stalls selling perishables at the side of the road in Kampung Gali Tengah yesterday morning.

In KEDAH, 23 men were handed a seven-day prison sentence and fined RM1,000 by the Sungai Petani Magistrate’s Court for loitering and other offences committed between March 27 and April 13, while the director of a recycling firm was jailed seven days and fined RM10,000 for allowing two of his employees to work during the MCO.

In TERENGGANU, 27 men were charged in the Kuala Terengganu Court.

A 33-year-old unemployed man was fined RM5,000 in default three months’ jail for insulting a police officer at a roadblock, while another 26 including a disabled man and 17-year-old teenager also pleaded guilty to defying the MCO.

Among the excuses given by them when arrested was to attend Quran classes, deliver burgers and throw rubbish.

In PENANG, 37 individuals including three women were fined between RM1,000 in default one months’ jail by the Butterworth Magistrate’s Court for violating the order, while another was fined RM500 or two weeks’ jail.

Another two men were sentenced to one month in jail, while the court set May 14 and June 1 for mention of three cases involving teens between the ages of 15 and 18 who were also charged with violating the MCO.

In SELANGOR, 44 individuals were charged in two courts, including 41 Myanmar nationals involved in a water festival celebration in Bandar Baru Salak Tinggi during the MCO.

The foreigners aged 19 to 34 who committed the offence at a men’s hostel near a factory in the area, were fined RM1,000 in default a months’ jail each by the Sepang Magistrate’s Court.

Meanwhile, at the Petaling Jaya Magistrate’s Court, two Indonesians were jailed three months, while a local was fined RM800 in default three months’ jail for being outside without valid reasons.

In KUALA LUMPUR, 33 people including several foreigners were charged in three courts for violating the MCO, with most fined between RM800 to RM2,000, and a few sentenced to jail terms of between six days and two months. – Bernama