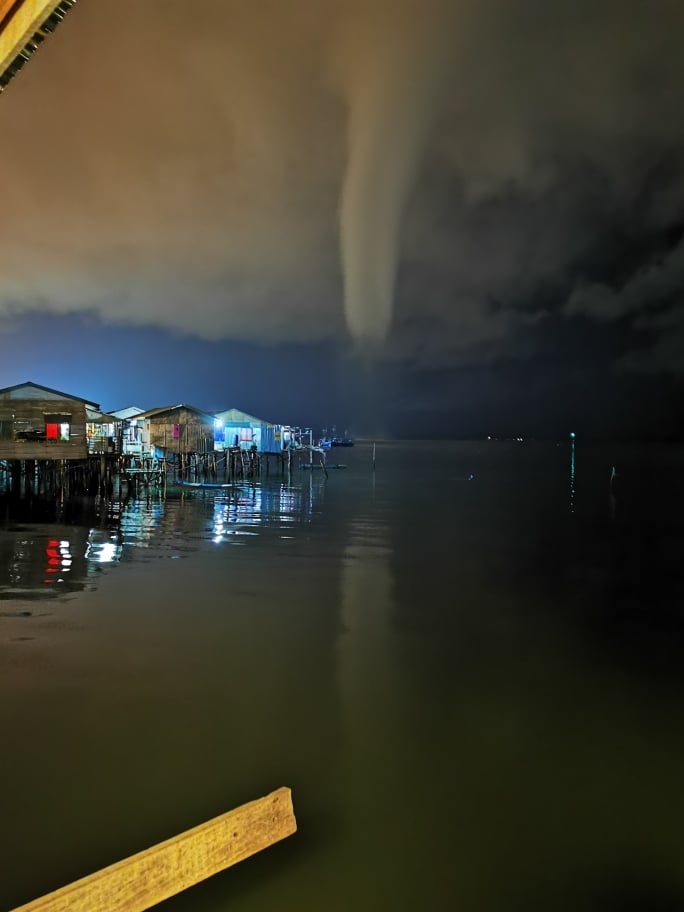 A picture taken by Abdullah Akbara shows the funnel cloud in Batu Sapi about 12.45am yesterday.

SANDAKAN: Villagers in Batu Sapi area were awakened by a funnel cloud, a phenomenon that looks like a waterspout or small tornado, at about 12.45am yesterday.

One of Kampung Cenderamata villagers, Abdullah Akbara said he saw the funnel cloud from his house and woke his family up.

He found that other villagers had also woken up and were evacuating their houses for fear it could cause damage.

“Before I left my house, I took a few pictures of the funnel cloud. It looked like a mini tornado. It was not raining but there was strong wind. We were scared that the thing might head to our houses, so we all left our houses and gathered at a site on the land.

“The funnel cloud stayed at the same place for about five to ten minutes, and then it moved towards Karamunting and disappeared,” Abdullah said.

After about 25 minutes, the villagers returned to their homes, and it started to rain heavily.

Abdullah said many of the villagers, including his family, had trouble sleeping that night because they were worried that what looked like a dangerous phenomenon would return; but it did not happen again.

“I have been living in this water village for over 20 years and this is the first time I saw this phenomenon,” he said.

Another villager of Kampung Bokara was also woken by the incident, pictures of which were widely shared on social media.

Rozalin Hashim said he was still up when he felt strong wind outside his house.

He said he thought it was just a strong wind, and only found out that a funnel cloud was outside his house when he saw sharing of the news on a WhatsApp group chat.

Sandakan Fire and Rescue Department Station Chief, Jimmy Lagung said they did not receive any call about the incident.

Meanwhile, Sabah Meteorological Department director Amirzudi Hashim said a lot of people had been confused and called the phenomenon a “waterspout” when it was actually a funnel cloud.

A funnel cloud is a normal weather phenomenon, in which the cloud that is shaped like a funnel is actually water droplets inside an air whirl.

“When the air rotates upward, temperature of hot air drops and condensation takes place which then forms a funnel of cloud.

“A funnel cloud is usually formed from Cumulonimbus or Cumulus clouds, and it does not touch the ground. Only when the funnel touches the water surface, it is called a waterspout,” he said.

Amirzudi said that the phenomenon usually lasts for a short duration and is not dangerous unless it touches the ground.

However, members of the public especially fishermen are advised to be careful and avoid it as it could cause very strong wind.