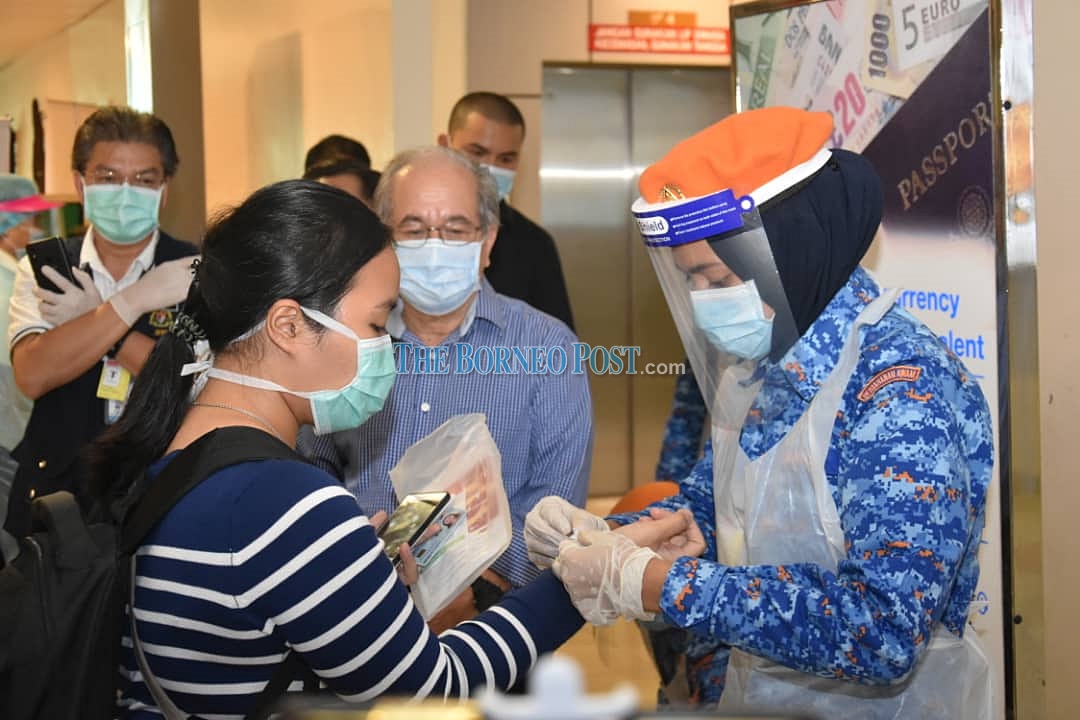 Uggah (centre) looks on as a Civil Defence Force personnel fastens a wristband tag on a student, who is returning to her village at Tarat Mawang in Serian.

KUCHING: Sarawakian students who were stranded in Peninsular Malaysia due to the Movement Control Order (MCO) began their journey back to the state today.

Deputy Chief Minister Datuk Amar Douglas Uggah, who was present to receive the students at KIA, said 26 students from this batch will be quarantined in Kuching and 261 others were allowed to return to Kuching, Serian and Samarahan, which coincidentally are red and yellow zone areas for Covid-19.

He explained that the group of 261 allowed to return have been given electronic wristband tags in order for their movement to be monitored by the Civil Defence Force.

“These students have been quarantined at their campus for 14 days and considered isolated from the rest of the community.

“Those returning to green zones would first be quarantined in hotels here and samples taken from them on the 10th day for screening.

“Those returning to red and yellow zones will be given wristband tags and a home quarantine notice. We will monitor them every day and administer swab tests on the seventh day for screening,” he told reporters.

Uggah, who is Sarawak Disaster Management Committee (SDMC) chairman, called on those given the wristband tags to comply with their quarantine order not out of fear for the law, but for the greater benefit of their family and community.

He stressed that this matter must not be taken lightly, because there had been recent instances whereby students returning from overseas had tested positive for Covid-19.

“Please help us to stop the chain of transmission. Do your part to help yourself, your family and society. Please contact the Health Department if you develop any symptoms such as a fever, coughing and difficulty in breathing.”

“Even though they have been quarantined in Kuala Lumpur, we have to quarantine them again here and take swabs. This is an extra precaution,” he said, adding Sarawak now has 29 green zones which should be protected.

Uggah stressed the 14 day quarantine order was at the advice of medical experts who said anyone infected could be detected within that period of time.

Meanwhile, the batch of 287 students were transported in 16 buses from their campus in Tanjung Malim, Perak as early as 3am yesterday.

Senior Minister (Security Cluster) Datuk Seri Ismail Sabri Yaakob had announced recently that Sarawakian and Sabahan students from various higher learning institutions under the Ministry of Higher Education (KPT) will be flown back to their respective home states from Peninsular Malaysia beginning May 1.