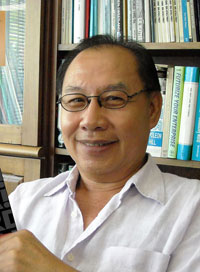 KOTA KINABALU: With nations around the world, Malaysia included, imposing drastic measures like full or partial lockdown of cities, movement control and social-distancing to contain the spread of Coronavirus, e-commerce and online learning has become increasingly significant to the people’s life under the new norm.

In recognition of the new reality, Datuk Dr Jeffrey Kitingan, president of Parti Solidariti Tanah Airku (STAR Sabah), thus, hoped that the Government could instruct telecommunication companies in the country to ramp up Internet broadband coverage and speed, in order to better cater to such an urgent need.

He noted that following the implementation of the Movement Control Order (MCO) on March 18, schools, colleges and higher learning institutions throughout the country remained closed until to-date, while the Ministry of Education had recently introduced the home-based learning initiative for students to continue with their studies during the MCO period, until the schools reopen.

While the Ministry of Education’s effort of introducing online learning is laudable and most welcomed, it should also take serious cognizance of the fact that many parents and students in the rural areas are facing problems with online learning, as these areas are currently still seriously lacking of cellular networks to provide Internet broadband service.

According to a recent survey conducted by the Sabah Ministry of Education and Innovation, it was estimated that around 50 percent of students in Sabah do not have smartphones or Internet data, or both, while the broadband coverage in the state was only around 45 percent based on the 2016 data.

“This is the most critical-yet-appropriate time for the Government to assist the students in Sabah, by improving the telecommunications and Internet networks in the state, in the suburban and rural areas especially, so that they could continue with their education online at home, until the schools reopen,” he said.

Jeffrey, who is also the MP for Keningau and Tambunan Assemblyman, was nonetheless unsure when would the school reopen, citing that the World Health Organization (WHO) Director-General Dr Tedros Adhanom Ghebreyesus had recently warned world leaders that the Coronavirus would be with us for a long time, and they would need to manage around the Coronavirus for the foreseeable future.

Jeffrey, who is currently the Deputy Tourism, Arts and Culture Minister, thus, proposed the Government to immediately instruct Telekom Malaysia (TM) to carry out installation of Unifi network in the suburban and rural areas of Sabah, to enable the students to conduct online learning at home, as well as to cater to increasing demand for e-commerce, under the new norm.

“I have been made to understand that Telekom Malaysia Berhad (TM) has been awarded all the Universal Service Provider (USP) projects by the Government, through the Malaysia Communications and Multimedia Commission (MCMC), to install fibre optic networks and services in the rural and interiors areas.

“It is obvious that there are still a lot of work to be done to improve Internet coverage of Sabah at par with the rest of Malaysia.

“I was also made to understand that the USP Project 2020 has again been awarded to TM early this year. Unfortunately, to-date, no work has started under this new award,” he highlighted.

Jeffrey also promised to bring this matter to the attention of his two Federal colleagues, namely Datuk Seri Dr Maximus Ongkili, Minister in the Prime Minister’s Department (in charge of Sabah, Sarawak Affairs), and the Communications and Multimedia Minister Datuk Saifuddin Abdullah, in order to expedite the much-needed cellular networks project to improve Internet coverage in rural and suburban areas of Sabah and Sarawak.