Friday, December 3
You are at:Home»News»Sabah»MP: Why can’t Parliament sit as normal in view of MCO relaxation? 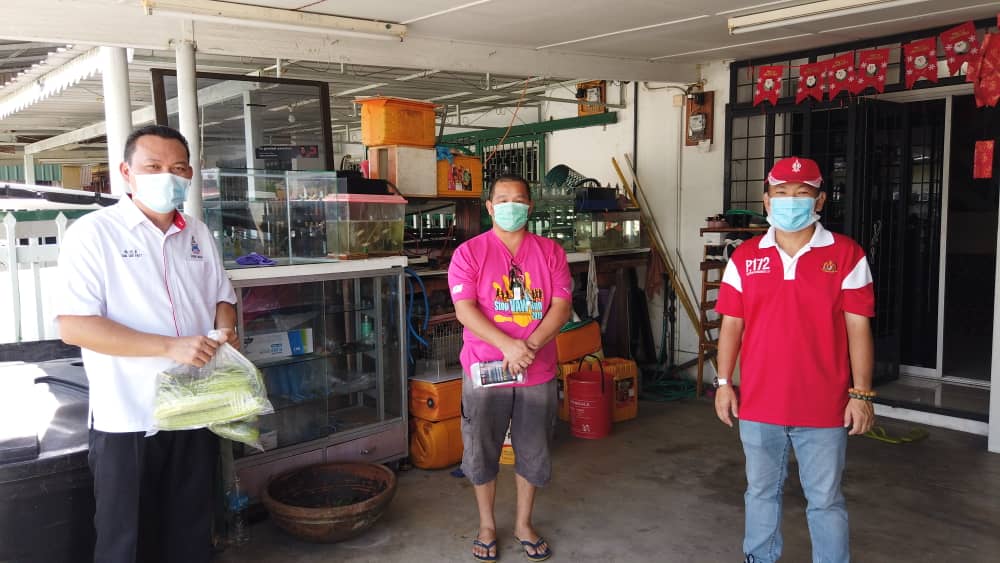 Chan (right) distributing vegetables and masks with Tan (middle) to a resident in Taman Antarabangsa.

However, he cannot help but wonders why is Parliament still scheduled for only one single day on May 18 by the Perikatan Nasional (PN) controlled Federal Government.

“No doubt the Covid-19 outbreak is sudden and had created a public health crisis around the world. As the current situation improves with more and more patients being discharged from hospitals, I welcome the restarting of the economy by the PN federal government. However, it must also be handled with caution to guard against the second wave of outbreaks,” said Chan.

“Parliament, as the highest legislative body elected in the country, deserves a full resumption of the meeting to allow lawmakers to work together to discuss in depth the plight of the rakyat and their livelihood under this pandemic, and to be a check-and-balance to the actions taken by the Perikatan Nasional federal government.”

Chan, who is also Sabah DAP secretary, told the media so yesterday after distributing masks and vegetables to a total of 1,500 families in his parliamentary constituency together with Likas Assemblyman Tan Lee Fatt and the Unit Pemimpin Pembangunan Masyarakat (UPPM) N. 14 Likas.

The Dewan Rakyat was originally scheduled to sit for 15 days from May 18 after being postponed from March 9 following the change in government, but was then cut short to a single day.

Chan pointed out that apart from shortened parliament sitting, the May 18 session would not include any oral question sessions, written questions, motions and special chambers.

The PN federal government attempts to justify this erosion of legislative, representative, and control functions by claiming that it is for the prevention of Covid-19.

He called on the federal government to clarify whether the Standard Operating Procedures (SOP) set by Ministry of International Trade and Industry (MITI) prior to this would still be in force, in particular, once an employee is infected with Covid-19 at the workplace, does the employer need to bear all medical related expenses?

It is important to make it clear which set of SOP by MITI or by MKN that has to be complied with upon the resumption of work on May 4.

“The PN government’s erratic action has led to public confusion. They had revised the relevant MCO regulations many times over and over again since the beginning. Previously it was announced that all non-essential movement (even to work) were banned until May 12th, but today, the regulations were unexpectedly relaxed and all of a sudden after May 4th, most economic activities could resume.

This endless revision or U-turn without sufficient prior warning would lead to confusion of the members of the public. Even I myself as an MP was caught by surprise!

Chan raised another example of sudden change of government policy where Muhyiddin had back on March 25 announced that all banks would provide customers with a six-month loan moratorium from April 1 involving amounts of up to RM100 billion.

On the same day, the Bank Negara stated that banks would automatically provide all customers with the relevant deferments.

However, Bank Negara suddenly announced yesterday that all customers of Hire-Purchase and fixed-rate Islamic financing would need to submit additional documents to qualify for repayment deferment.

“Is this not a clear backtracking of what had been said before?” questioned Chan.

Chan reminded the public not to completely relax after May 4 as until and unless a vaccine is successfully developed, the coronavirus may come back and infect people who are careless.

He noted the fact that Malaysia does not conduct large-scale testing as a result of capacity limitation (financial resources, insufficient testing supplies), and that only the current 33 clusters in the country can be targeted for screening.

“As such, please continue to adhere to practise social distancing and a high degree of self-hygiene,” said Chan.